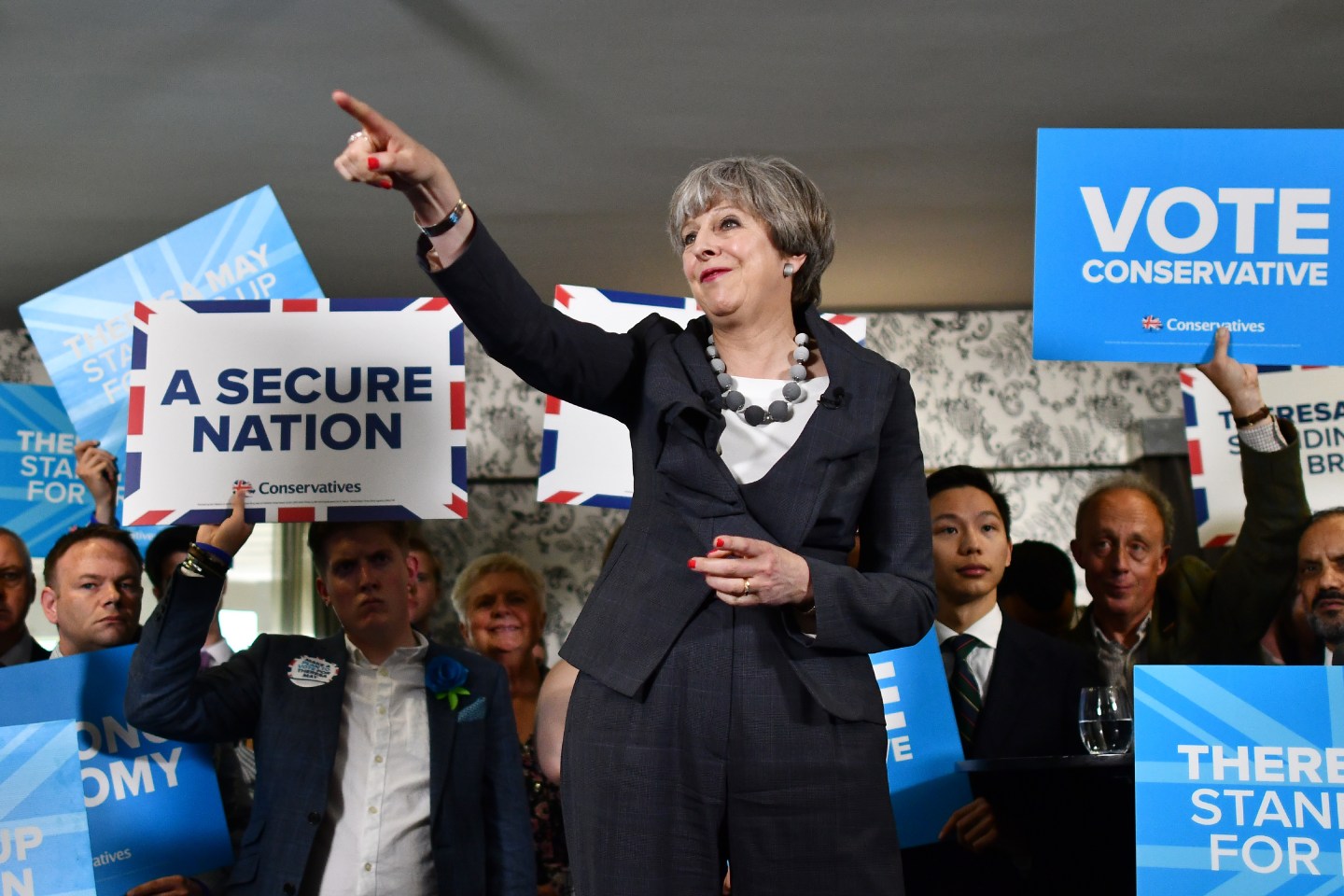 STOKE-ON-TRENT, ENGLAND - JUNE 6: British Prime Minister Theresa May delivers a speech during an election campaign visit to Langton Rugby Club on June 6, 2017. Stoke-on-Trent, England. Britain goes to the polls on June 8 to vote in a general election only days after another terrorist attack on the nation's capital. (Photo by Ben Stansall - WPA Pool/Getty Images)
WPA Pool Getty Images

If the recent public outcry from the tech industry is to be believed, there are only two things amiss about U.K. Prime Minister Theresa May’s call to clamp down on online media giants in the wake of the weekend terror attack in London: it’s wrong in principle, and it’s unenforceable in practice.

But the resistance may be futile. The chances are good that tighter regulation, in some form, is heading down the tracks toward the likes of Facebook and Google whatever the outcome of Thursday’s election—and not just in the U.K., but elsewhere in Europe too.

May has called for several measures that would limit users’ privacy, arguing that some tech platforms abet terrorism by creating the “safe space it needs to breed,” a reference to the popularity of encrypted messaging services such as WhatsApp. (Both Khalil Masood, the perpetrator of the Westminster Bridge attack in March, and Khuram Butt, one of the three London Bridge perpetrators, used WhatsApp ahead of their attacks) Much of the criticism of these proposals (such as this blistering post by Boing Boing editor Cory Doctorow) zeroed in the impracticality of May’s plans to deny terrorists those “safe spaces.” An effective ban on encryption, the critics say, would throw the baby out with the bathwater, by undermining the security of a host of other benign applications like online banking or transponders in car keys. Backdoors, once created, are open to exploitation by bad actors—and May’s own Investigatory Powers Act that came into force at the start of the year already created huge potential for such abuse by granting a large numbers of government bodies greatly increased powers of data retention.

Others, such as Labour Party leader Jeremy Corbyn, who wants to succeed May as Prime Minister on Friday, have accused her of trying to divert attention away from the fact that since taking power in 2010, the Conservatives have cut the number of police officers by 20,000 in an austerity drive that has spared no-one (except, arguably, the country’s wealthier retirees). Over 3,500 neighborhood police officers were cut in the last two years alone, according to the Police Federation of England and Wales and the independent body responsible for reviewing police operations warned two months ago of a “national crisis” brewing due to cuts in the law enforcement budget. All three of this year’s fatal attacks have featured people who were already known to the police, and had been reported for signs of suspected radicalization, but who had dropped off the force’s radar screen because they were seen as a low priority.

For May’s Conservatives, who historically depend on mobilizing older voters for electoral success, targeting a modern phenomenon like the Internet has been a reliable winner. There are 12 references to it in its election manifesto, compared to only two in Labour’s. But even the Tories’ language suggest they realize that coercing companies to break their own encryption is not a realistic option. Here’s what the manifesto says:

“We will continue to push the internet companies to deliver on their commitments to develop technical tools to identify and remove terrorist propaganda, to help smaller companies build their capabilities and to provide support for civil society organisations to promote alternative and counter-narratives. In addition, we do not believe that there should be a safe space for terrorists to be able to communicate online and will work to prevent them from having this capability.”

But while dismantling encryption on messaging could prove difficult, there’s an easier target for the next government, and one that both parties appear quite happy to bash: social media networks. A cross-party committee of the House of Commons that recently looked into allegations of extreme and illegal content on networks like YouTube and Facebook came to some blistering conclusions, and would have gone further if it hadn’t had to wrap up its work early when May called a snap election.

Below are just some of the choicest zingers from the report’s conclusions that give a clear idea of which way the wind is blowing.

Fortune asked Facebook and Google for responses to both the report and to May’s comments. A Google spokesperson said: “Our thoughts are with the victims of this shocking attack, and with the families of those caught up in it. We are committed to working in partnership with the government and NGOs to tackle these challenging and complex problems, and share the government’s commitment to ensuring terrorists do not have a voice online.” And we got an automated reply from Facebook. But it’s safe to say the debate is far from over.