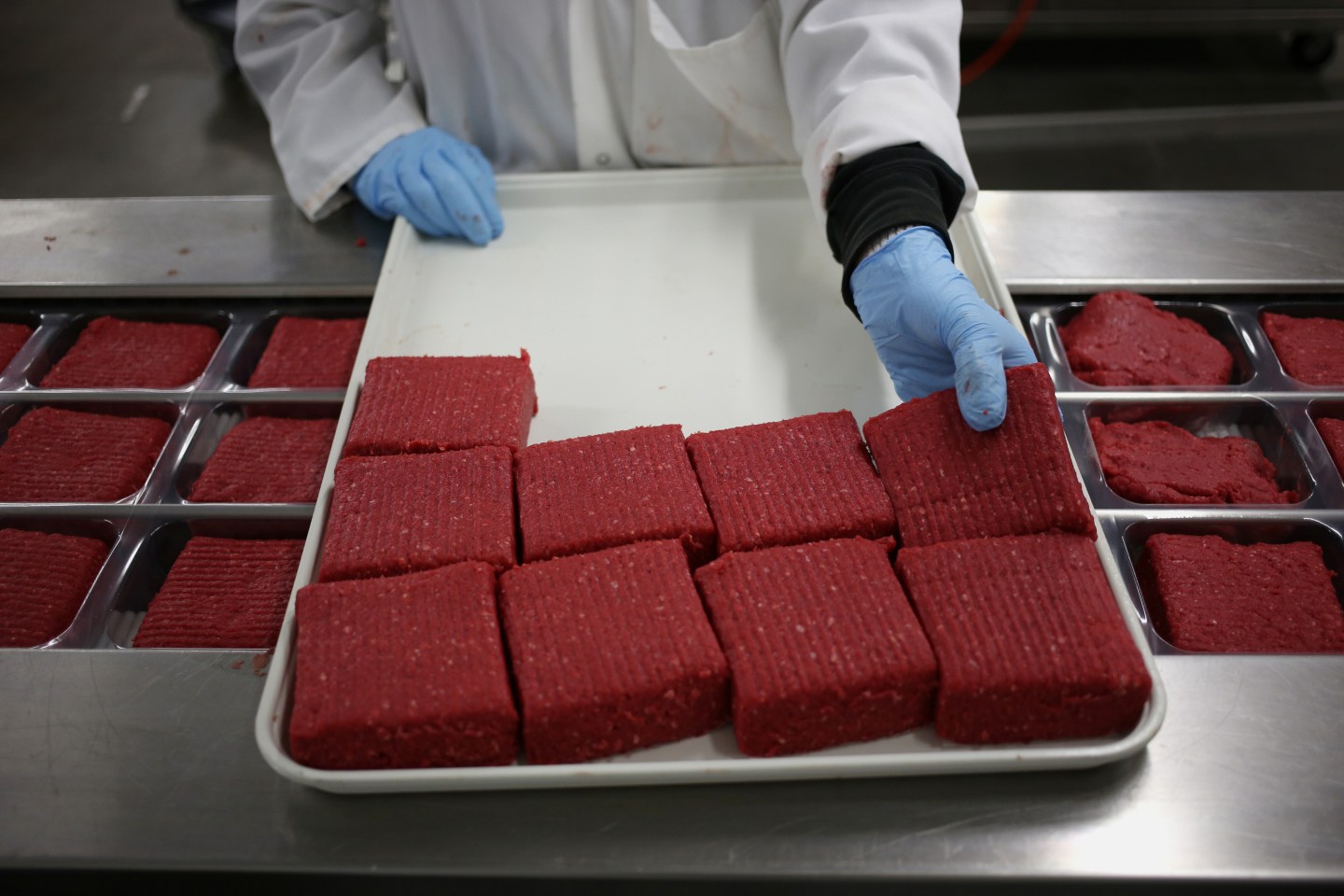 Bricks of grass-fed ground bison are packaged at the NorthStar Bison LLC processing plant in Rice Lake, Wisconsin, U.S., on Wednesday, Sept. 3, 2015. Bison continues to gain in popularity and chip away at beef's dominance in the meat market. The growing appetite for bison is part of a wider trend toward organic foods, a small but expanding part of the food industry. Aside from the perceived health benefits, demand for such meat signals a rejection of factory-farming methods that account for most protein eaten in the U.S. Photographer: Luke Sharrett/Bloomberg via Getty Images
Luke Sharrett—Bloomberg/Getty Images

The $5.7 billion lawsuit pitting big agriculture against big media is the first major court challenge against a media company since accusations of “fake news” by U.S. President Donald Trump and his supporters have become part of the American vernacular.

The trial is expected to run eight weeks.

BPI claims ABC, a unit of Walt Disney (DIS), and its reporter Jim Avila defamed the company by using the term “pink slime” and making errors and omissions in its 2012 reporting.

But ABC lawyer Dane Butswinkas said “pink slime” was a common term, used more than 3,800 times in the media prior to ABC’s reports.

In the aftermath of ABC’s broadcasts, BPI closed three of its four processing plants and said its revenue dropped 80% to $130 million.

“That success took about 30 years to succeed and it took ABC less than 30 days to severely damage the company,” a lawyer for BPI, Dan Webb, said in court.

Butswinkas countered that BPI had already lost multiple customers for LFTB, including major fast food chains, prior to the ABC reports, due to unhappiness with the product.

ABC has said its coverage was accurate and deserved protection under the U.S. Constitution’s First Amendment which guarantees freedom of religion, speech and the right to a free press.

ABC denies any wrongdoing and is confident its reporting will be “fully vindicated,” a lawyer for ABC and Avila, Kevin Baine of Williams & Connolly, has said.

The trial is being held in Elk Point, South Dakota, about 20 miles north of BPI’s headquarters, which employs 110 people. Roughly 6% of the area labor force is involved in agriculture and related industries, according to the local chamber of commerce.

Election records show 67% of the U.S. presidential vote in Union County, where Elk Point sits, was won by Trump, who uses the term “fake news” to argue that some mainstream media outlets cannot be trusted.

Lawyers for BPI have declined to say if they plan to focus on “fake news” as a tactic at trial. But during a January court hearing, a BPI lawyer, Erik Connolly, said ABC broadcasts and online reports about “lean finely textured beef” (LFTB) used unreliable sources and set out to foment public outrage. The ABC reports amounted to “fake news,” Connolly told the judge.

BPI’s signature product, commonly mixed into ground beef, is made from beef chunks, including trimmings, and exposed to bursts of ammonium hydroxide to kill E. coli and other contaminants.

Webb said in court on Monday that between March 7 and April 3 of 2012, ABC used the term “pink slime” more than 350 times across six different media platforms including TV and online.

Reporter Avila, who was in the courtroom wearing a gray suit and striped tie, had cherry-picked experts who backed up the story he wanted to tell and ignored experts who gave information that differed from this narrative, Webb said.

Webb said Avila cursed at David Theno, a food safety expert, and hung up on Theno when he contradicted parts of Avila’s story.

“That is what happens when someone tells ABC something that’s not consistent with what they want to hear about the product.”

For more about the meaty industry, watch Fortune’s video:

Butswinkas, the lawyer for ABC, described Avila as an “old-school bulldog” journalist and said Theno was paid by BPI and had a close relationship with the company’s founder.

The focus of ABC’s story was not food safety but labeling, Butswinkas said. He said BPI lobbied for years to get its LFTB added to ground beef without labels indicating it was there.

“Until the secret started to get out to consumers, no one knew that there was a product treated with ammonia in their traditional ground beef,” he said.

To win its case, BPI must show the network intended to harm the company or knew what it reported was false when it referred to BPI’s LFTB product as “pink slime.”

The trial is upending the normally tranquil Elk Point, population 2,000. To make room for overflow crowds, the county commission earmarked $175,000 to turn the Union County Courthouse basement into an enlarged courtroom and move records into a specially constructed separate building.