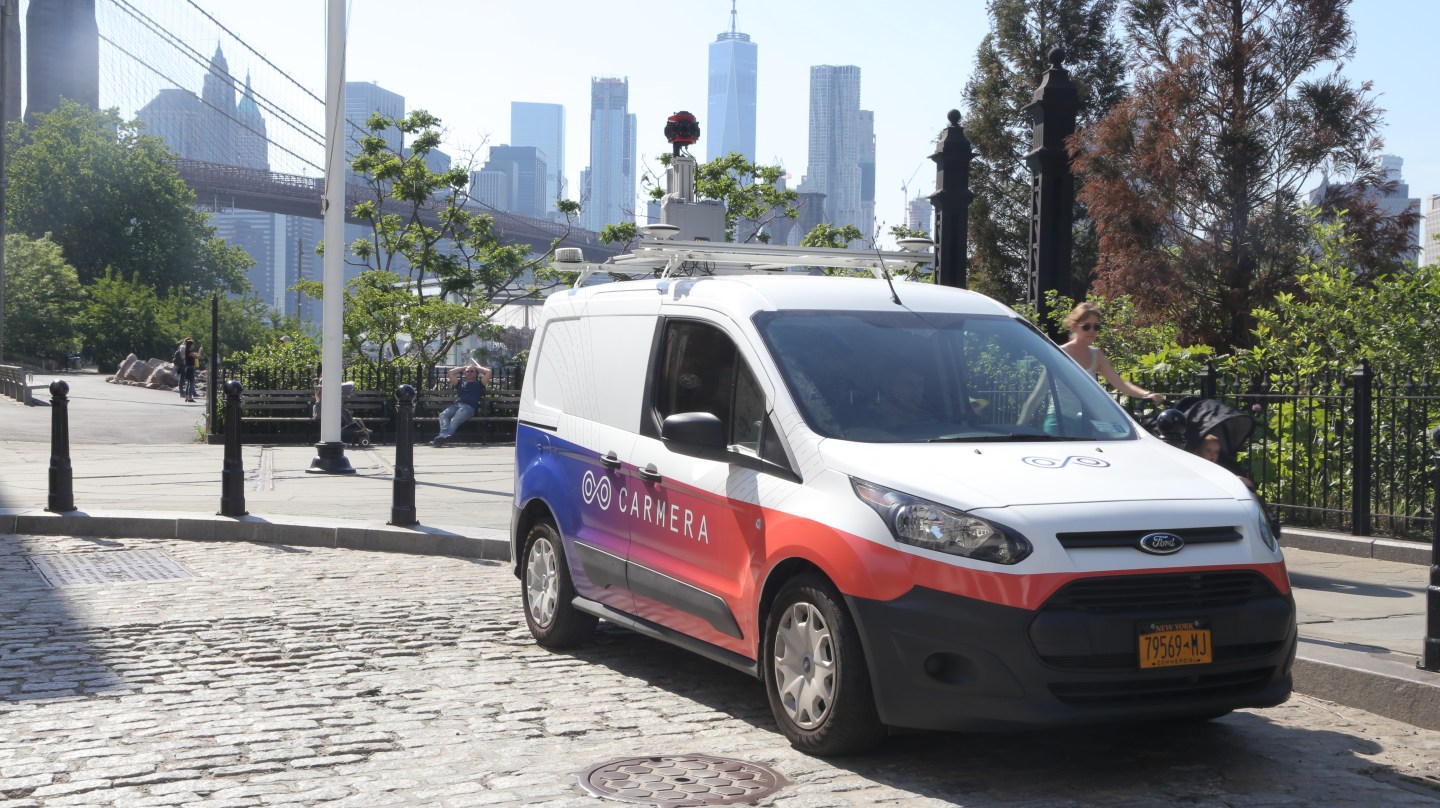 The biggest problem preventing our self-driving future from becoming a self-driving reality is, naturally, humans. We’re unpredictable, we jaywalk, we ride our bikes the wrong way down a one-way. We don’t alert mapping companies when we have initiated a construction project that blocks off half the road, or installed a new curb. The result is that self-driving cars are great on the open road. But constantly changing, people-packed dense, urban areas? Not so much.

That’s one problem Carmera, a New York City-based startup that’s been in stealth mode for the last two years, has set out to tackle. The company’s founders observed that constantly refreshed mapping data would be crucial for any company working on self-driving technology, and that the available options weren’t ideal.

By CEO and co-founder Ro Gupta’s measure, the current market for 3D mapping data falls into three buckets: Good, but not for sale (Google’s 3D mapping data); decent, but expensive, slow to update, and only for sale to auto manufacturers (GPS companies like TomTom and Here); and bad and two dimensional, but free (crowdsourced sites like OpenStreet Map foundation). Gupta, formerly head of business development at Disqus, and his co-founder Justin Day, a former CTO of Makerbot, saw an opportunity to offer a product that Gupta categorizes as “good, but efficient, affordable, and accessible.”

Speaking exclusively with Fortune, Gupta explains the company’s unique solution to the 3D mapping problem: It has partnered with delivery fleets to collect its data. In exchange for attaching sensors on top of their fleet vehicles, Carmera provides its partners, including storage startup MakeSpace, with video monitoring data and data analytics around safety and efficiency. (MakeSpace CEO Sam Rosen says he was so impressed by the platform, he personally asked to invest. “Carmera’s visual monitoring technology has allowed us to resolve and avoid incidents in a way that was simply not possible before,” he says.)

Carmera calls its approach “pro-sourced” –crowdsourcing with professional quality control. The data is only available in New York City so far. Carmera supplements the fleet data with its own vehicle.

But the fleet monitoring is not Carmera’s primary business. The company wants to get this 3d mapping data into the hands of any business that can benefit. That goes beyond companies working on self-driving technology.

“While we believe in [autonomous vehicles] and the impact to society, we don’t think the enabling tech to get there should be in the hands of a few big car companies,” Gupta says. Meanwhile, he adds, “the big tech companies have way too much control over the underlying data and they’re not furthering a lot of use cases that the data could help.”

Carmera’s beta customers include architecture firms that can use the data to determine, say, whether a pedestrian bridge would fit in the intended area without having to hire an on-site surveyor.

Francis Cauffman, an architecture firm based in New York City, is a beta customer. “High quality, instantly accessible spatial data for city streets has just not existed until now. It has the potential to significantly accelerate and expand our design processes allowing for a much quicker iterative process,” says Ken Kramer, the firm’s president.

Carmera’s videos also create an accurate, data-driven model of foot traffic for an entire city. That data that is valuable to city planners and the real estate and retail industries that normally rely on unreliable GPS data, Gupta says.