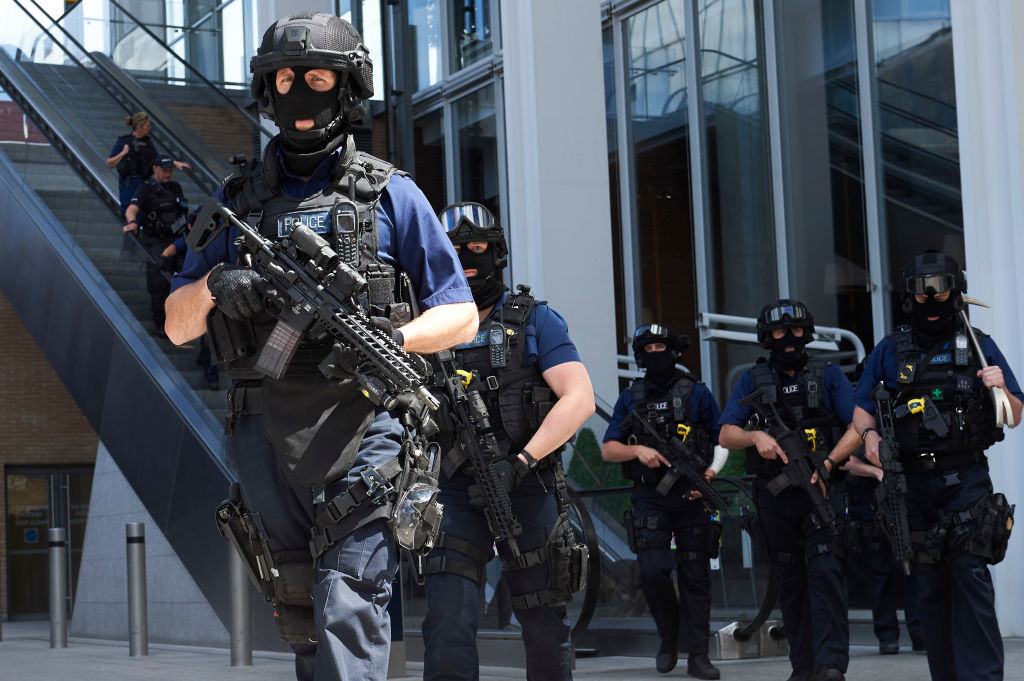 British Prime Minister Theresa May called on Sunday for a stronger response to Islamist extremism after three attackers drove a van into pedestrians on LondonBridge and stabbed others nearby, killing seven people and injuring 48.

London‘s Metropolitan Police arrested 12 people in the Barking district of east London in connection with the attack and raids were continuing there, the force said.

The attack occurred five days before a parliamentary election and was the third to hit Britain in less than three months. May said the vote would go ahead as planned on Thursday.

“It is time to say enough is enough,” the Conservative leader said in a televised statement outside her Downing Street office, where flags few at half-mast.

“We cannot and must not pretend that things can continue as they are,” May said, calling for a beefed-up counter-terrorism strategy that could include longer jail sentences for some offences and new cyberspace regulations.

Less than two weeks ago, a suicide bomber killed 22 children and adults at a concert by U.S. singer Ariana Grande in Manchester in northern England. In March, in a attack similar to Saturday’s, five people died after a man drove into pedestrians on Westminster Bridge in central London and stabbed a policeman.

Eyewitnesses described harrowing scenes as the attackers’ white van veered on and off the bridge sidewalk, hitting people along the way, and the three men then ran into an area packed with bars and restaurants, stabbing people indiscriminately.

Accounts emerged of people trying to barricade themselves in a pub while others tried throwing tables and other objects to fend off the attackers.

May’s government announced that a nationwide minute of silence would be held at 1000 GMT on Tuesday to pay respect to the victims of the attack and flags would remain at half-mast on government buildings until Tuesday evening.

At an apartment block in Barking, a resident told Sky News he heard controlled explosions early on Sunday morning as police gained access to the building. A Reuters photographer later saw four women being removed from the building, shielding their faces as they stepped into police vans.

There was no immediate claim of responsibility for the London Bridge attack.

Islamic State, losing territory in Syria and Iraq to an advance backed by a U.S.-led coalition, had sent out a call on instant messaging service Telegram early on Saturday urging its followers to carry out attacks with trucks, knives and guns against “Crusaders” during the Muslim holy month of Ramadan.

Islamist militants have carried out scores of deadly attacks in Europe, the Middle East, Africa, Asia and the United States over the past two years.

Not connected to Manchester, Westminster attacks

“We believe we are experiencing a new trend in the threat we face as terrorism breeds terrorism,” May said.

“Perpetrators are inspired to attack not only on the basis of carefully constructed plots … and not even as lone attackers radicalised online, but by copying one another and often using the crudest of means of attack.”

She said the series of attacks were not connected in terms of planning and execution, but were inspired by what she called a “single, evil ideology of Islamist extremism” that represented a perversion of Islam and of the truth. She said this ideology had to be confronted both abroad and at home.

“While we have made significant progress in recent years, there is – to be frank – far too much tolerance of extremism in our country,” she said, urging Britons to be more robust in stamping it out in the public sector and in wider society.

U.S. President Donald Trump, taking to Twitter on Sunday, urged the world to stop being “politically correct” in order to ensure public security against terrorism.

Most of the main political parties suspended election campaigning on Sunday, but May said this would resume on Monday. The anti-European Union UK Independence Party said it would not suspend its campaign because disrupting democracy was what the extremists wanted.

London Bridge is a major transport hub and nearby Borough Market is a fashionable warren of alleyways leavened with bars and restaurants that is always bustling on a Saturday night.

The area remained cordoned off and patrolled by armed police and counter-terrorism officers on Sunday, with train stations closed. Forensic investigators could be seen working on the bridge, where buses and taxis stood abandoned.

At several points outside the cordon, people started laying flowers and messages of grief and solidarity as the day progressed.

Ariana Grande and other music stars were due to give a benefit concert at Manchester’s Old Trafford cricket ground on Sunday evening to raise funds for victims of the concert bombing and their families. Police said the event would go ahead as planned though security would be increased.

“Today’s One Love Manchester benefit concert will not only continue, but will do so with greater purpose,” Grande’s manager, Scooter Braun, said on Twitter after the London attack.

Manchester police said a minute’s silence had been held at the start of a charity soccer match at Manchester United’s stadium to honour the victims of both the concert and London Bridge attacks.

The three attackers on Saturday night were wearing what looked like explosive vests that were later found to have been fake. May said the assailants’ aim had been to sow panic. The BBC showed a photograph of two possible attackers shot by police, one of whom had canisters strapped to his body.

The London Ambulance Service said 48 people had been taken to five hospitals across the capital and a number of others had been treated at the scene for minor injuries. Police said some of those in hospital had life-threatening injuries.

London Mayor Sadiq Khan said the official threat level in Britain remained at severe, meaning a militant attack is highly likely. It had been raised to critical after the Manchester attack, then lowered again days later.

“One of the things we can do is show that we aren’t going to be cowed is by voting on Thursday and making sure that we understand the importance of our democracy, our civil liberties and our human rights,” Khan said.

Roy Smith, a police officer who was at the scene during the unfolding emergency, expressed his shock on Twitter.

In tweets, Trump offered help to Britain but also levelled apparent criticism of Khan for saying there was no need to be alarmed. Khan had earlier said Londoners would see an increased police presence on the streets of the city and people should not be alarmed by that.

German Chancellor Angela Merkel, French President Emmanuel Macron and Russian President Vladimir Putin were among those who sent messages of condolences and made statements of solidarity.

Pope Francis invited thousands of pilgrims who attended mass in St. Peter’s Square in Vatican City on Sunday to pray for the victims of the London attack.

Four French nationals were among those injured in the London attack, French officials said. Australia said two of its citizens were caught up in it and one of them was in hospital.

The Manchester bombing on May 22 was the deadliest attack in Britain since July 2005, when four British Muslim suicide bombers killed 52 people in coordinated assaults on London‘s transport network.