Which Jobs Are Getting Automated the Fastest? 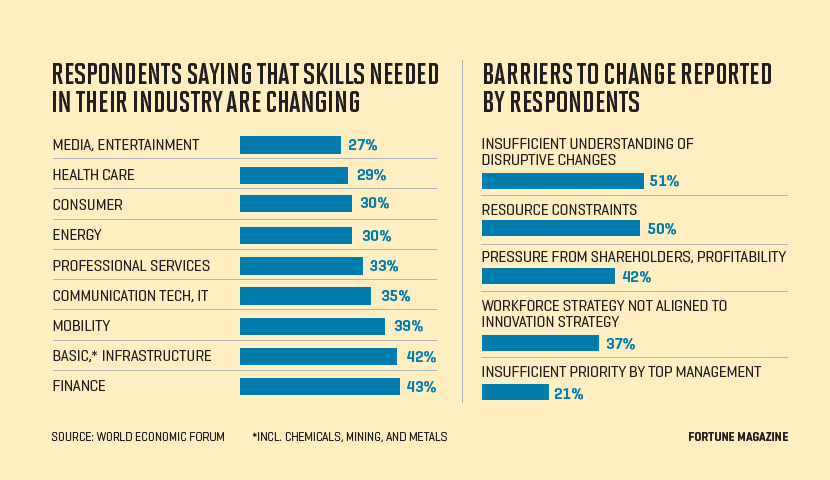 Technology is transforming every profession in profound ways. Indeed, the internet’s ravaging of the media industry at this point is almost a cliche. But some good news for ailing newspapers: most people in the industry believe they’ve processed enough change to last them for a while.

According to World Economic Forum surveys, media folks feel that after the major upheaval of the past few years, their jobs today aren’t changing all that fast (see the chart above). Finance jobs, on the other hand, seem to be undergoing a radical overhaul as new technology takes hold.

According to the World Economic Forum surveys, over a third of the core skill sets in most jobs will be replaced by new ones by 2020. The group also surveyed the forces that are standing in the way of change. The regular suspects make the list: bosses that don’t get it, workers that refuse to adapt. But number one the number one obstacle on the list is lack of understanding. People still don’t know how or when their industries will be remake or disrupted. As anyone at a newspaper could probably tell you, things might get worse before they get better.

Read More: Halt Hackers in Their Tracks With This Simple Key

A version of this article appears in the May 1, 2017 issue of Fortune with the headline “Training for Your Next Job, the One That Might Not Exist Yet.”