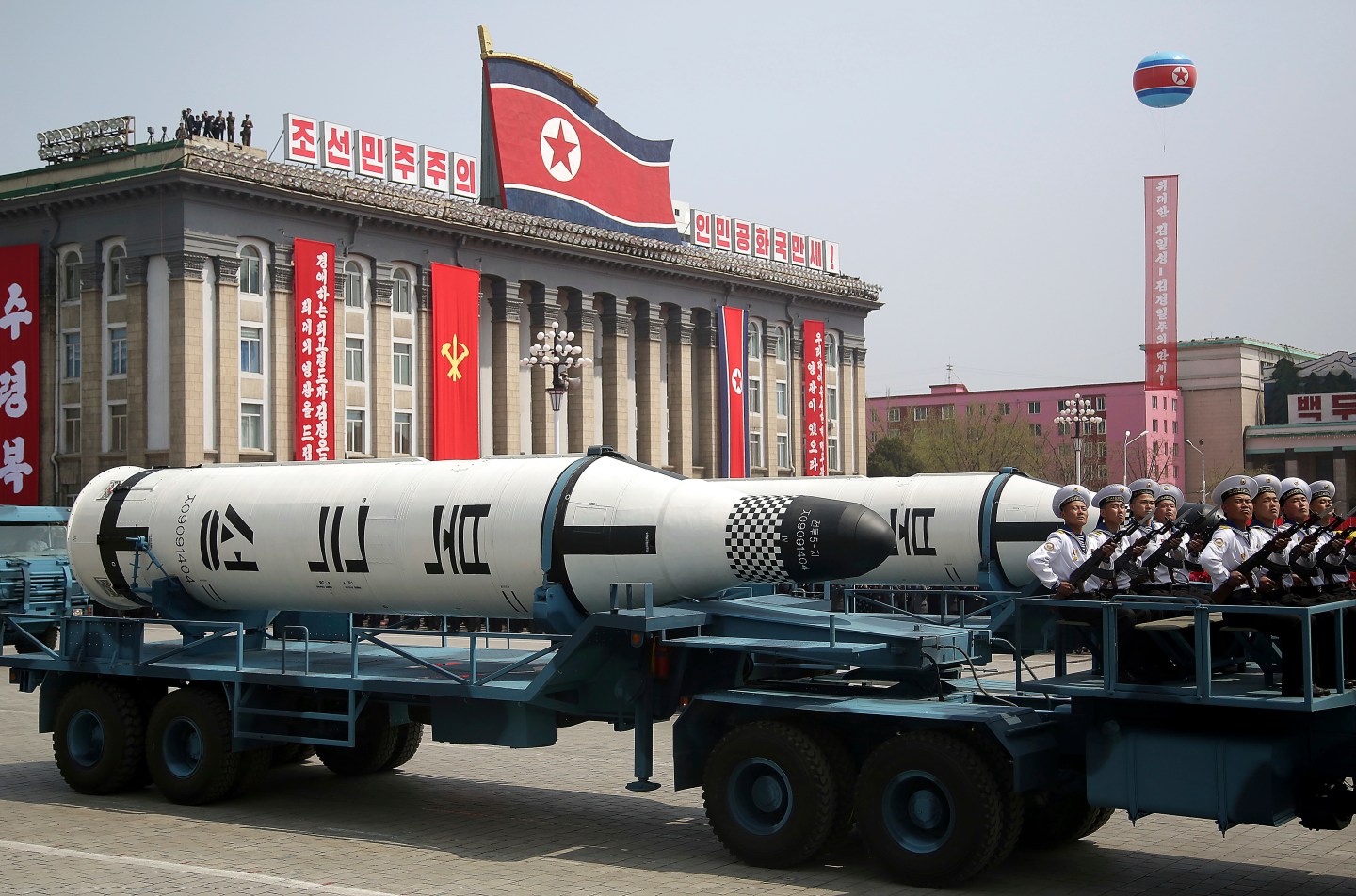 During the past week, tensions surrounding North Korea’s nuclear weapons programme appear to have increased the prospect of war on the Korean peninsula.

Such fears are heightened by the fact that the precise details of the Trump administration’s policy towards North Korea are still something of a mystery. On the one hand, officials have claimed that Obama’s policy of “strategic patience” that assumed sanctions would force Pyongyang to voluntarily drop its nuclear programme, has been a failure. With more hawkish language directed at Pyongyang alongside the bombing of a Syrian airbase earlier this month, the Trump administration has hinted at the possibility of a pre-emptive military response to North Korea’s nuclear and missile tests. In reality, however, the strong probability that a military strike against the country could descend into a broader regional conflict with devastating consequences for the region suggests that this is unlikely to form the basis of Trump’s North Korea policy.

Arguably, more significant then have been Trump’s recent attempts to pressure China into playing a more active role in reigning in Pyongyang’s nuclear ambitions, as apparent in Trump’s veiled tweeted threat:

I have great confidence that China will properly deal with North Korea. If they are unable to do so, the U.S., with its allies, will! U.S.A.

However, if Trump believes that China genuinely has either the means or inclination to “solve” the North Korean problem on American terms, he is likely to be sorely disappointed.

To understand why, we should first ask the question of what China’s strategic interests are with regards to the Korean peninsula. There is a simple geopolitical logic at play in China’s approach to North Korea in that for centuries, the Korean peninsula formed the geographical bridgehead through which Japan sought to militarily challenge Chinese hegemony in Asia. Korea’s geopolitical significance also explains why the newly established People’s Republic of China sought in 1950 to defend the North Korean regime following American intervention into the Korean War.

Though much has changed since then, the foreign policy aim of maintaining a friendly regime on the northern half of the peninsula can still be seen as central to Beijing’s wider security objectives. And as geopolitical competition between the US and China has intensified in recent years, the prospect of a North Korea collapse and a pro-US unified Korea on China’s doorstep continues to be an outcome to be avoided at all costs.

In line with China’s increasingly uneven development since the late 1970s, Beijing as well as local governments in China’s northeast also see economic exchange with North Korea as playing a central role in the revitalisation of the economically depressed Chinese border regions. For landlocked provinces such as Jilin and Heilongjiang, trade and investment with North Korea and access to the latter’s ports is seen as a means of catching up with the more prosperous coastal regions. So even though Pyongyang’s repeated nuclear and missile tests have served to strengthen the US military presence in the East Asian region, Beijing is concerned with the question of how to reign in Pyongyang without facilitating a North Korean collapse and inviting chaos on its own borders.

In political terms, China’s influence on Pyongyang is clearly limited. North Korea’s fierce autonomy alongside longstanding Korean fears of Chinese hegemony over the peninsula mean that Pyongyang’s relations with Beijing bare little resemblance with those that characterized relations between the Eastern European socialist states and Moscow.

Beijing also appears to be aware that a complete economic blockade of North Korea is unlikely to pressure Pyongyang to halt its nuclear and missile programmes. One reason for this is related to the relatively resilient nature of the North Korean state in the face of economic hardship.

The catastrophic collapse of the North Korea economy in the 1990s, for example, did little to give rise to overt popular resistance against the regime. In addition, there is no evidence of any splits within Pyongyang relating to the nuclear programme that might be exploited. Furthermore, cutting off North Korea’s foreign exchange earnings is unlikely in itself to impact significantly on Pyongyang’s ability to fund its nuclear programme. North Korea is already the lowest spending of all the world’s nuclear states, and given its perceptions of its security environment, the nuclear programme is likely to be one of the last areas in which it would cut spending too.

Thus, Beijing is clearly aware that while it can theoretically exert considerable economic damage on the North Korean economy, there are few mechanisms through which this is in itself likely to translate into a change in policy direction on the part of the Pyongyang regime. As such, Beijing has tended to opt for visible measures, such as the banning of coal imports, to send a message to both Pyongyang as well as to the United States, but do not gravely imperil the stability of the North Korean regime. It should be noted also that China’s approach also reflects divergent ideas about possible futures for North Korea. Western as well as South Korean understandings of North Korea’s future are shaped strongly by the German experience and of a general notion of the illegitimacy of the North Korean state and the desirability of its collapse.

China’s views, on the other hand, are shaped much by its own experience in that it sees North Korea as potentially following a path of reformed socialism. North Korea has indeed made several attempts to emulate the Chinese reform experience, but of course, questions exist as to how successful such attempts can be in the context of the country’s continued geopolitical standoff with the United States.

For this reason, China’s preference has been for the North Korea’s nuclear programme to be resolved through negotiations rather than coercion. Though it is often argued that there are simply “no good options on North Korea,” the fact that the options of military or economic pressure are either too dangerous or have been tried and have so far failed.

Perhaps it is time for Trump to take China’s lead on negotiations as a potential solution to the Korean quagmire, thus also providing the US president with an opportunity to put his own “Art of the Deal” in to practice.

Kevin Gray is a senior lecturer in international relations at the School of Global Studies at the University of Sussex. He is the author of Korean Workers and Neoliberal Globalisation.