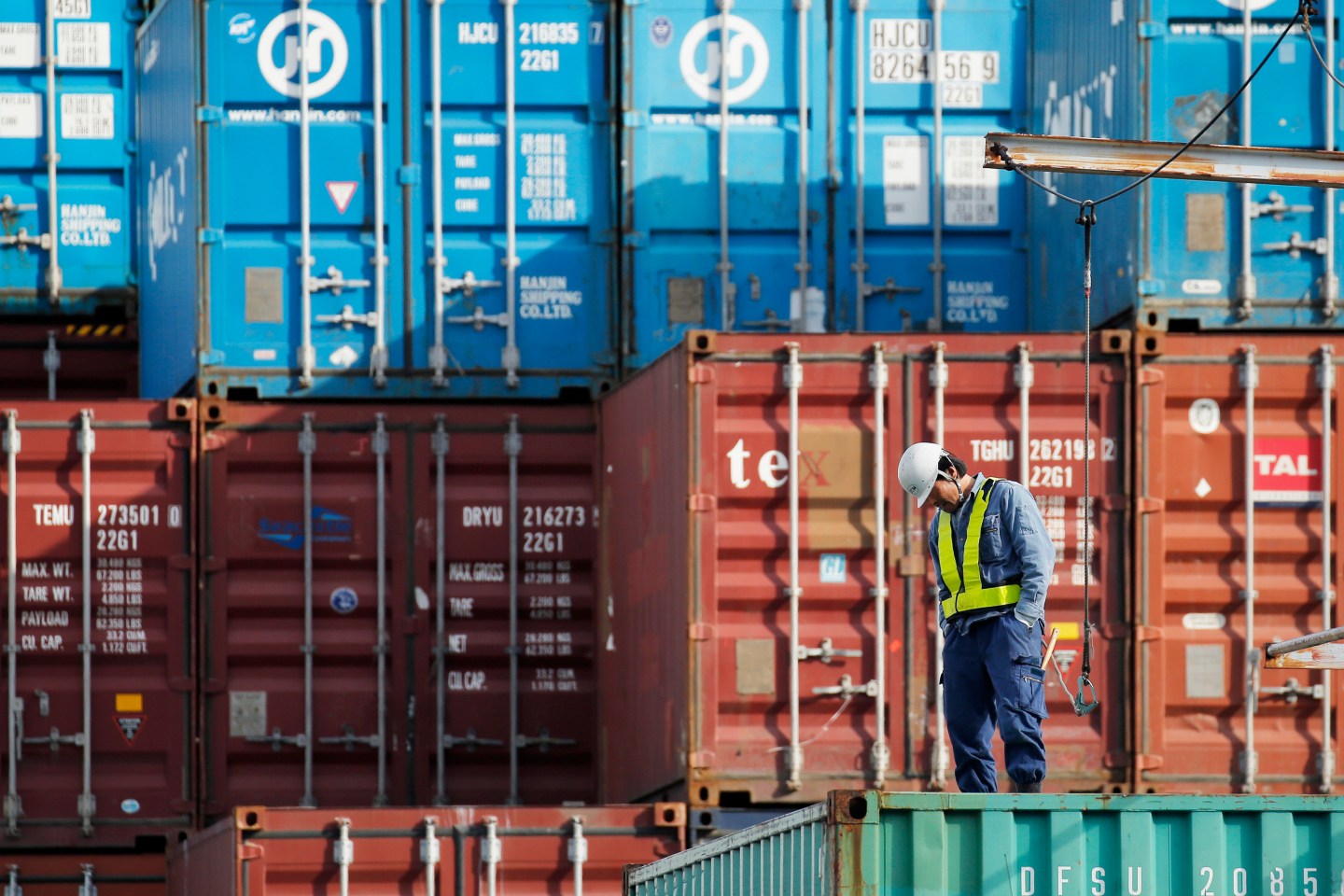 A worker stands on a shipping container at a container terminal in Tokyo, Japan, on Tuesday, April 21, 2015. U.S. and Japanese officials failed to reach agreement in marathon trade talks in Tokyo, a setback for Prime Minister Shinzo Abe's hopes of arriving for a summit in Washington next week with a pact in hand. Photographer: Kiyoshi Ota/Bloomberg via Getty Images
Kiyoshi Ota/Bloomberg via Getty Images

The International Monetary Fund raised its 2017 global growth forecast on Tuesday due to manufacturing and trade gains in Europe, Japan, and China, but warned that protectionist policies threaten to choke a broad-based recovery.

The IMF, whose spring meetings with the World Bank get underway in Washington this week, forecast that the global economy would grow 3.5% in 2017, up from its previous forecast of 3.4% in January.

In its latest World Economic Outlook, the Fund said that chronically weak advanced economies are expected to benefit from a cyclical recovery in global manufacturing and trade that started to gain momentum last summer.

“The economic upswing that we have expected for some time seems to be materializing,” IMF chief economist Maurice Obstfeld wrote in the report.

The IMF lifted Japan’s 2017 growth projection by 0.4 percentage point from January, to 1.2%, while the eurozone and China both saw a 0.1 percentage point growth forecast increase to 1.7% and 6.6%, respectively.

Meanwhile, the IMF held its 2017 U.S. growth forecast steady at 2.3%, which still represents a substantial jump from 1.6% growth in 2016, partly due to expectations that President Donald Trump will cut taxes and increase government spending.

The IMF also revised Britain’s growth forecast to 2.0% for 2017, up a half percentage point from January.

Obstfeld said an anticipated pullback in consumer spending after last year’s UK vote to leave the European Union had so far failed to materialize. He added that uncertainty over Britain’s snap elections announced on Tuesday would not necessarily change the outlook, but a clear mandate from the British people could help Brexit negotiations.

“There was already uncertainty on how the negotiation would go and what it’s final outlines would be. So, it may be that this is a tradeoff of a little more uncertainty before June 8 for less uncertainty later,” Obstfeld told a news conference.

Although growth looks to be strengthening broadly among advanced and emerging market economies as well oil and commodity exporters that are starting to benefit from a commodity price recovery, including Russia and Brazil, the IMF said the recovery remains fragile.

The outlook faces headwinds from chronically weak productivity growth and policies that could constrict trade, the IMF said. It did not specifically mention the Trump administration’s “America First” trade agenda aimed at reducing U.S. trade deficits and turning away more imports.

“One salient threat is a turn toward protectionism, leading to trade warfare,” Obstfeld said, adding this “would result in a self-inflicted wound that would lead to higher prices for consumers, lower productivity and therefore, lower overall real income for households.”

The case against trade protectionism is expected to be a major theme of the semi-annual gathering of finance officials from the IMF, the World Bank and the Group of 20 major economies later this week. IMF Managing Director Christine Lagarde warned last week that a “sword of protectionism” hung over a brightening global outlook.

U.S. Commerce Secretary Wilbur Ross pushed back in a Financial Times interview, saying such warnings were aimed at the Trump administration and were “rubbish,” because the United States was less protectionist than its trading partners.

The IMF also said that risks to the global outlook also could come from a faster-than-expected pace of interest rate hikes in the United States, which could trigger a sharp rise in the dollar and disruptive capital outflows from emerging markets.

The Fund also said China’s strong growth was clouded in the medium term by “growing vulnerabilities” associated with its reliance credit-fueled growth.