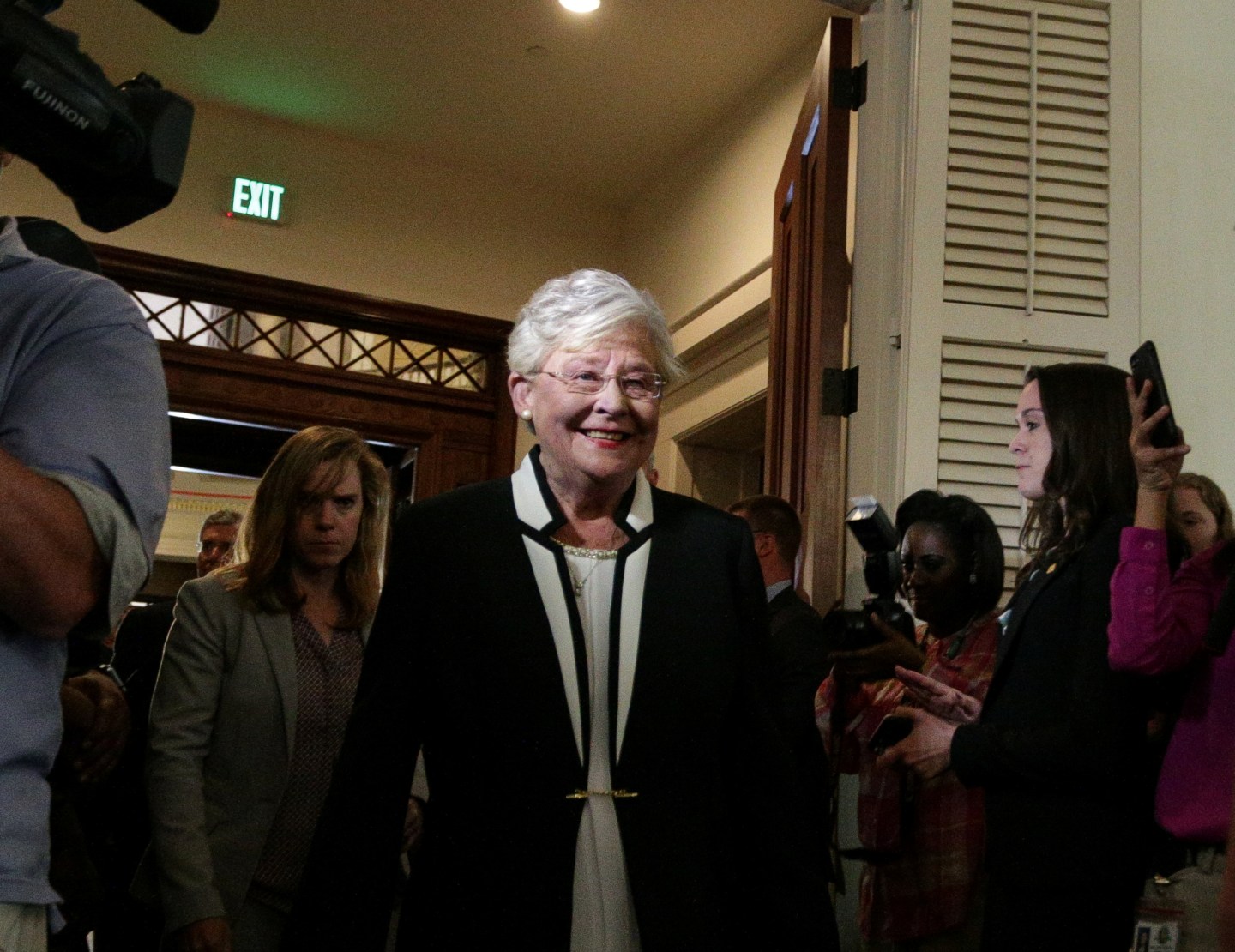 Alabama Lt Governor Kay Ivey enters the house chambers prior to being sworn in as Alabama's new governor, after Alabama Governor Robert Bentley announced his resignation amid impeachment proceedings on accusations stemming from his relationship with a former aide, in Montgomery, Alabama, U.S., April 10, 2017. REUTERS/Marvin Gentry - RTX35080
Marvin Gentry—Reuters

Alabama Governor Robert Bentley resigned on Monday, after pleading guilty to two misdemeanors related to the coverup of an alleged affair with former aide Rebekah Caldwell Mason. Taking his place is Lieutenant Governor Kay Ivey. As she was sworn in on Monday, Ivey became the first Republican woman to occupy the state office and the fifth woman to currently serve as a governor nationwide.

“Today is a dark day in Alabama, but also it’s one of opportunity,” she said during the ceremony. “I ask for your help, and your patience as together we steady the ship and improve Alabama’s image.”

Ivey is taking the reins of a state in political turmoil, and not just because of the circumstances that catapulted her into office. Beyond Bentley’s lengthy scandal that earned him the nickname “Luv Guv,” former House Speaker Mike Hubbard, a Republican, was convicted on 12 felony ethics violations in June and left office, according to the Montgomery Advertiser. And last September, the state’s Chief Justice Roy Moore was suspended for what was left of his term after ordering probate judges not to issue marriage licenses to same-sex couples. His replacement Acting Alabama Chief Justice Lyn Stuart swore Ivey in.

Ivey tried to put a positive spin on the transition of power on Monday, calling it “a demonstration of our successful practice of rule of law and the principles of democracy.”

Ivey is the second woman to serve as Alabama’s governor. The first was Lurleen Wallace, wife of Governor George Wallace, known for his staunch support of racial segregation. She was governor for about a year after state law kept her husband, a Democrat, from running for consecutive terms, according to the New York Times. Interestingly enough, as a student, Ivey campaigned for Lurleen Wallace.

By the time Ivey, now 72, first won elected office—state treasurer in 2002—she’d switched her political affiliation to the Republican party. She served two terms in that role and it saddled her with perhaps her biggest piece of political baggage: She oversaw the state’s Prepaid Affordable College Tuition program that let parents pay for their children’s college education ahead of time. The program failed to keep up with rising tuition costs and was hampered by the financial crisis. During Ivey’s second term, in 2008, it stopped accepting new enrollees and the state later settled a class action lawsuit with participants. Ivey blamed the program’s collapse on market forces and, in 2010, she narrowly won the lieutenant governor election, defeating the incumbent.

On Monday, Ivey became the fifth woman to currently occupy a governor’s mansion, according to Rutgers University’s Center for American Women and Politics. The others are Democrat Gina Raimondo of Rhode Island, Democrat Kate Brown of Oregon, Republican Susana Martinez of New Mexico, and Republican Mary Fallin of Oklahoma. A sixth is expected to join the ranks if Iowa Governor Terry Branstad, a Republican, is confirmed as U.S. Ambassador to China—President Donald Trump nominated him for the role in December—and he’s replaced by his lieutenant Kim Reynolds, a Republican.

The current total is down from six last year and well shy of the all-time high of nine, which was achieved in 2004 and again in 2007. In the history of the United States, only 38 women have served as governor—22 Democrats and 16 Republicans.