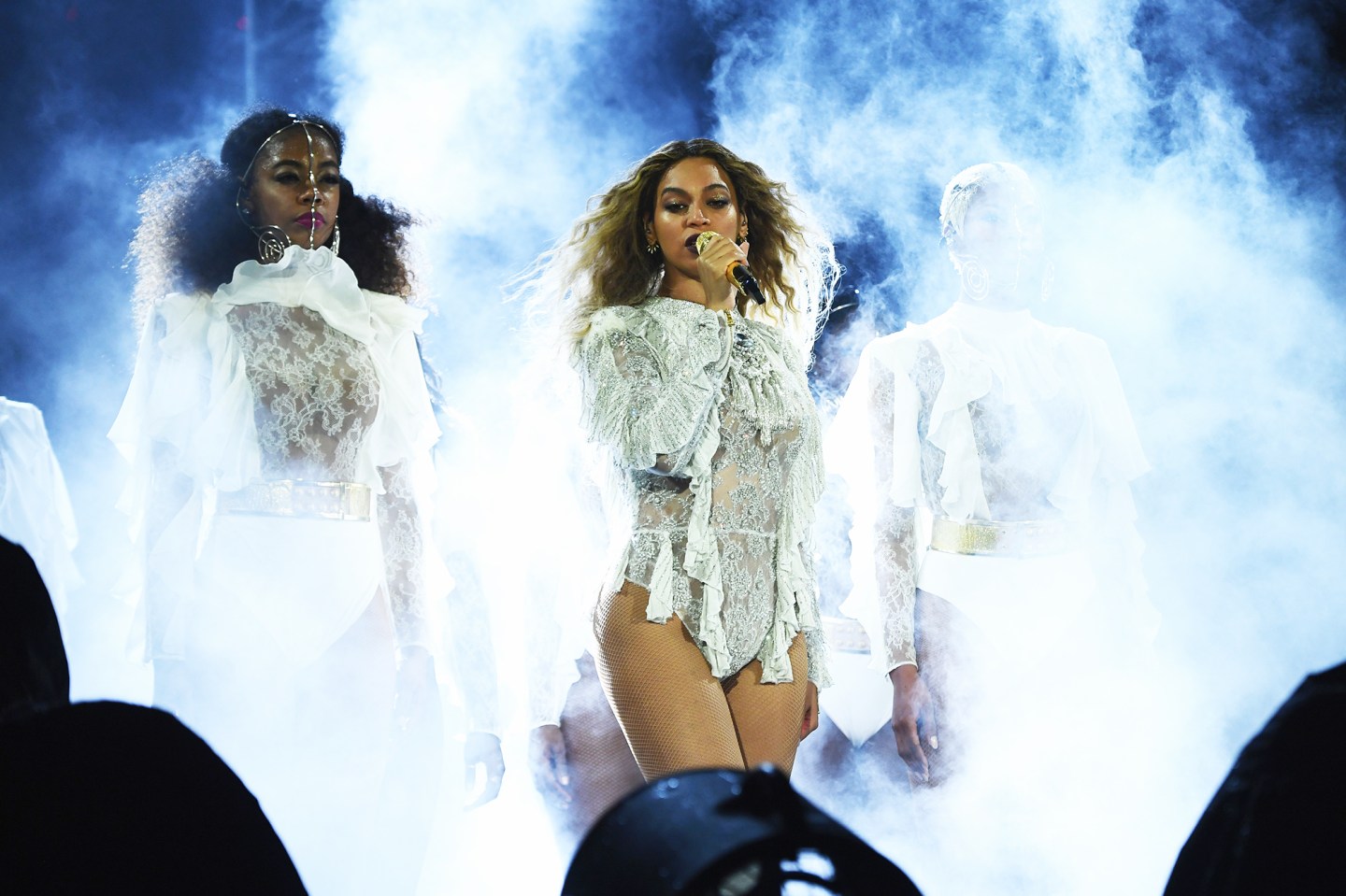 ‪Beyoncé‪ Knowles has an estimated net worth of $290 million as of March 2017, according to Forbes. Beyoncé, one of the most popular stars and recording artists in the world, rose to fame in the late 1990s with the R&B girl group Destiny’s Child. She established herself as a solo artist in 2003, with the release of her debut album Dangerously in Love. Over the following decade, Beyoncé released four more critically acclaimed albums and starred in four films. The 2016 release of Lemonade exclusively on Tidal debuted at No. 1, becoming her sixth album to do so. Beyoncé ranks on the Forbes America’s Richest Entrepreneurs Under 40 at No. 38.

How Does Beyonce Make Her Money?

With the 2016 Formation World Tour, Beyoncé grossed $256 million. The seventh concert tour by Beyoncé, Formation reached $210 million through its first two legs, which included a tour through North America and Europe. According to Billboard, the first two legs (of three) sold 1.8 million tickets at 40 performances. Box office sales in Europe, which included 17 concerts, totaled $86.9 million. After a hiatus in August 2016, Beyoncé picked up the tour again in September and performed in nine cities across North America. The tour wrapped on Oct. 7 with a show in New Jersey. Billboard reported Beyoncé sold 2.2 million tickets and averaged $5.2 million in gross. Earnings from the Formation tour skyrocketed her total net worth.

In the 2014 On the Run Tour, Beyoncé co-headlined with husband Jay Z Carter. On the Run Tour, plagued by rumors of rifts between the couple and low ticket sales, grossed more than $100 million in ticket sales across 19 shows in North America, Billboard reported. According to Billboard, the tour earned about $5.2 million each night with an average of nearly 45,000 in attendance.

Beyoncé’s 2013-2014 tour, The Mrs. Carter Show World Tour, grossed $212 million from nearly two million attendees over 126 shows, Billboard reported. The tour featured Beyoncé as different queens at each show and included songs from all of her albums up to that point. After she released Beyoncé in late 2013, songs from the eponymous album were incorporated into the 2014 leg of her tour.

In 2009, Beyoncé embarked on the year-long I Am… Sasha Fierce world tour, which grossed $119.5 million. The tour included songs from her previous albums as well as I Am… Sasha Fierce and prior work with Destiny’s Child, and kicked off in North America. Beyoncé performed across the world, hitting Europe, Asia, Africa and Australia with more than 100 shows over the year. Tours prior to 2009 include the 2003 Dangerously In Love Tour and the 2007 The Beyoncé Experience, which grossed $90 million.

‪Beyonce‪’s total album sales stand at 17.2 million, according to Billboard, as of 2016. As of 2015, Beyoncé’s first album Dangerously in Love had sold more than 5 million copies. The 2003 album opened at No. 1 on the Billboard 200 chart. Subsequent albums have sold between 1 million and 3 million copies (physical). Beyoncé’s 2006 B’Day sold 3.41 million copies, while 2008’s I Am… Sasha Fierce sold 3.2 million. In 2011, Beyoncé released 4, which sold 1.5 million copies. Two years later, the singer dropped the surprise album Beyoncé, which has sold 2.3 million copies. And 2016’s Lemonade became the star’s sixth million-selling album. It has sold 1.52 million copies and 2.1 million album-equivalent (counting streaming downloads) copies.

‪Beyoncé‪ and her mother Tina Knowles produced the ready-to-wear fashion line called House of Deréon, introducing it in 2004, with a junior line following in 2006. The clothing line ultimately folded in 2012.

‪In 2005, Beyoncé teamed up with a shoe brand to create a shoe line for Deréon called House of Brands.

In 2016, Beyoncé introduced a new “athleisure” clothing line as a joint venture with Topshop’s Sir Phillip Green. After weeks of hype, the athletic wear became available to buyers in April 2016, and sold out almost immediately. The collection at the time offered about 100 pieces of clothing, ranging from $15 to $265.

‪Beyoncé‪ launched her own fragrance line Beyoncé Heat, which featured a number of later editions, including Heat Rush, Pulse and Rise. The first fragrance broke Macy’s sales record with $75,000 sales in one day. According to Fashionista, Beyoncé has sold more than $400 million in fragrances.

‪In 2012, Beyoncé signed a $50 million deal with Pepsi, which included traditional promotional appearances and a new commercial. Pepsi also invested in Beyoncé’s creative projects. Beyoncé has been involved with Pepsi since 2002, appearing in ads with Britney Spears, Jennifer Lopez and David Beckham. She has also performed during the Pepsi-sponsored Super Bowl halftime show multiple times over the years. The singer’s face was also featured on a limited edition collection of Pepsi cans, which at one point, included the faces of One Direction and Nicki Minaj, according to the Huffington Post. USA Today reported in 2013 that Beyoncé had a significant amount of creative control in her partnership with Pepsi. She helped to design the special edition cans and played a large part in establishing the Pepsi Creative Development Fund.

‪In 2004, Beyoncé partnered with Tommy Hilfiger to launch a new fragrance called True Star. People reported at the time that the singer was paid $250,000 to represent the fragrance. The ad for the perfume featured Beyoncé in black and white singing “Wishing on a Star,” and photographer Mario Testino shot the advertisements for print. “I’m so thrilled, it’s so exciting to be a part of this,” Beyoncé told People. “There’s not many women in the world who can say they have their own fragrance, not many black women, so this is wonderful. It’s so classy and so timeless and so beautiful.”

‪In 2007, Beyoncé starred in a fragrance ad for Giogio Armani for a perfume called Diamonds. The ad campaign showed Beyoncé singing “Diamonds Are a Girl’s Best Friend.” At the time, she said diamonds signify a woman’s strength. “Now women can buy their own diamonds,” she said. The perfume was available for between $39.50 to $69.50. It’s unclear how much she made for endorsing the fragrance.

‪Beyoncé‪ has partnered with American Express since the age of 18. The brand has sponsored her concert tours, offering promotions to fans. According to an unofficial biography of the singer, Beyoncé signed a multi-million dollar endorsement deal with American Express in 2007, which included print ads and commercials.

‪Beyoncé‪ has also had endorsement deals with Nintendo DS and L’Oreal. In 2009, the singer appeared in an ad for a Nintendo DS game, Rhythm Heaven, which she compared to Guitar Hero. She promoted her fashion line through Nintendo and renewed the partnership the next year.

‪As previously mentioned, Beyoncé has a deal with Topshop on a 50/50 split of Parkwood Topshop Athletic Ltd.

‪Beyoncé‪ became a co-owner in the music-streaming business Tidal, run by Jay Z along with other artists. She reportedly owns a 3% equity stake along with 16 artist stakeholders, including Kanye West, Nicki Minaj, Rihanna, Chris Martin and Madonna. Jay Z in 2017 sold one-third of Tidal to sprint for an undisclosed amount, following two years of rumors that the streaming service was struggling. The same group of artists who own the service will continue to run it, the New York Times reported. Tidal is reported to have about a million paying users.

‪Beyoncé‪ and Jay Z have a Hamptons rental dubbed The Sandcastle that has 12 bedrooms, 12 bathrooms, a screening room, a bowling. They reportedly paid more than $40 million for the home. Beyoncé reportedly bought a $5.9 million property in Houston for her mother, Tina Knowles, in 2013. That same year, it was reported that she paid $40 million for Cher’s home in Malibu.

Recent reports indicate that the couple is looking for a home in Los Angeles and reportedly looked at a 57,000 square-foot place, according to People.

‪Beyoncé‪ has starred in about seven movies, according to box office records. Notable films include Dreamgirls (2006), Austin Powers in Goldmember (2002) and Obsessed (2009). China Daily reported in 2006 that Beyoncé earned $12.5 million for Dreamgirls, which was twice as much as she earned for Austin Powers. The Daily reported that the singer was expected to make up to $24 million for the Dreamgirls soundtrack.

Beyoncé pulled in about $54 million, according to Forbes.

‪How much Beyoncé is expected to make in 2017:

She and Jay Z are rumored to be involved with a Los Angeles restaurant about to open. She performed at the Grammys; there’s a new Ivy Park campaign for her active wear line for the spring. It’s unclear whether she is expected to tour or perform, although it is unlikely.