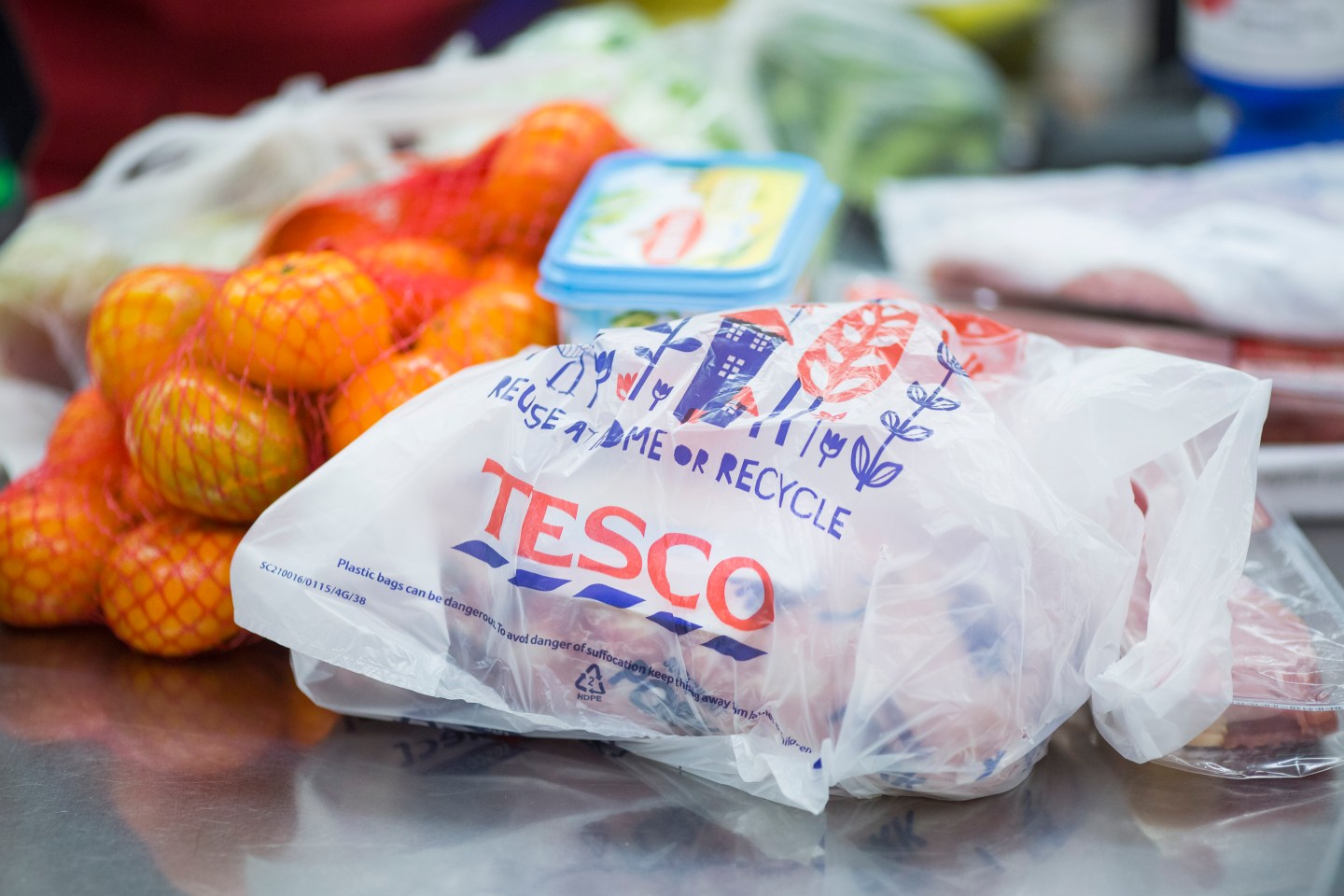 A Tesco-branded plastic shopping bag sits on a check-out desk inside a Tesco supermarket, operated by Tesco Plc, in London, U.K., on Monday, April 20, 2015. Tesco's April 22 results will serve as a reminder of the scale of the task still facing new Chief Executive Officer Dave Lewis after his decision to close dozens of stores, cancel some openings, consolidate head offices and cut prices on hundreds of branded goods. Photographer: Jason Alden/Bloomberg via Getty Images
Jason Alden/Bloomberg via Getty Images

Britain’s biggest retailer Tesco has agreed to pay a $162 million fine plus compensation to settle an investigation over a 2014 accounting fraud that sparked the biggest crisis in the company’s near 100-year history.

Tesco (TSCDY), which has been rebuilding itself after the scandal and a price war that hammered the whole sector, said on Tuesday it would take a one-off charge of 235 million pounds ($295 million) in its 2016-17 results, due on April 12.

The supermarket group has struck a so-called deferred prosecution agreement (DPA) with Britain’s Serious Fraud Office (SFO), enabling it to avoid a criminal conviction provided it meets certain conditions and pays the financial penalty. It will also pay compensation to certain investors of around 85 million pounds.

“We sincerely regret the issues which occurred in 2014 and we are committed to doing everything we can to continue to restore trust in our business and brand,” said Chief Executive Dave Lewis.

Shares in the group were flat in early trading.

The DPA relates to false accounting by Tesco‘s UK business between February 2014 and September 2014.

Tesco said the DPA was the subject of a preliminary court ruling on Monday. The SFO and the firm’s UK unit Tesco Stores Limited will now seek final judicial approval for the DPA from the court on April 10.

The retailer also said on Tuesday it had agreed with Britain’s Financial Conduct Authority (FCA) to a finding of market abuse in relation to a trading statement it published on Aug. 29 2014.

It has said that statement overstated the expected profits of the group at that time by 250 million pounds, mainly because it booked commercial deals with suppliers too early.

There is no penalty being levied by the FCA on Tesco.

As part of the agreement, Tesco will establish a compensation scheme for investors who bought shares or bonds for cash between Aug. 29, 2014, and Sept. 19, 2014, giving 24.5 pence per share plus varying rates of interest depending on whether the investor was institutional or retail.

“The cost of the compensation payable is estimated by both Tesco and the FCA to be in the region of 85 million pounds excluding interest,” it said.