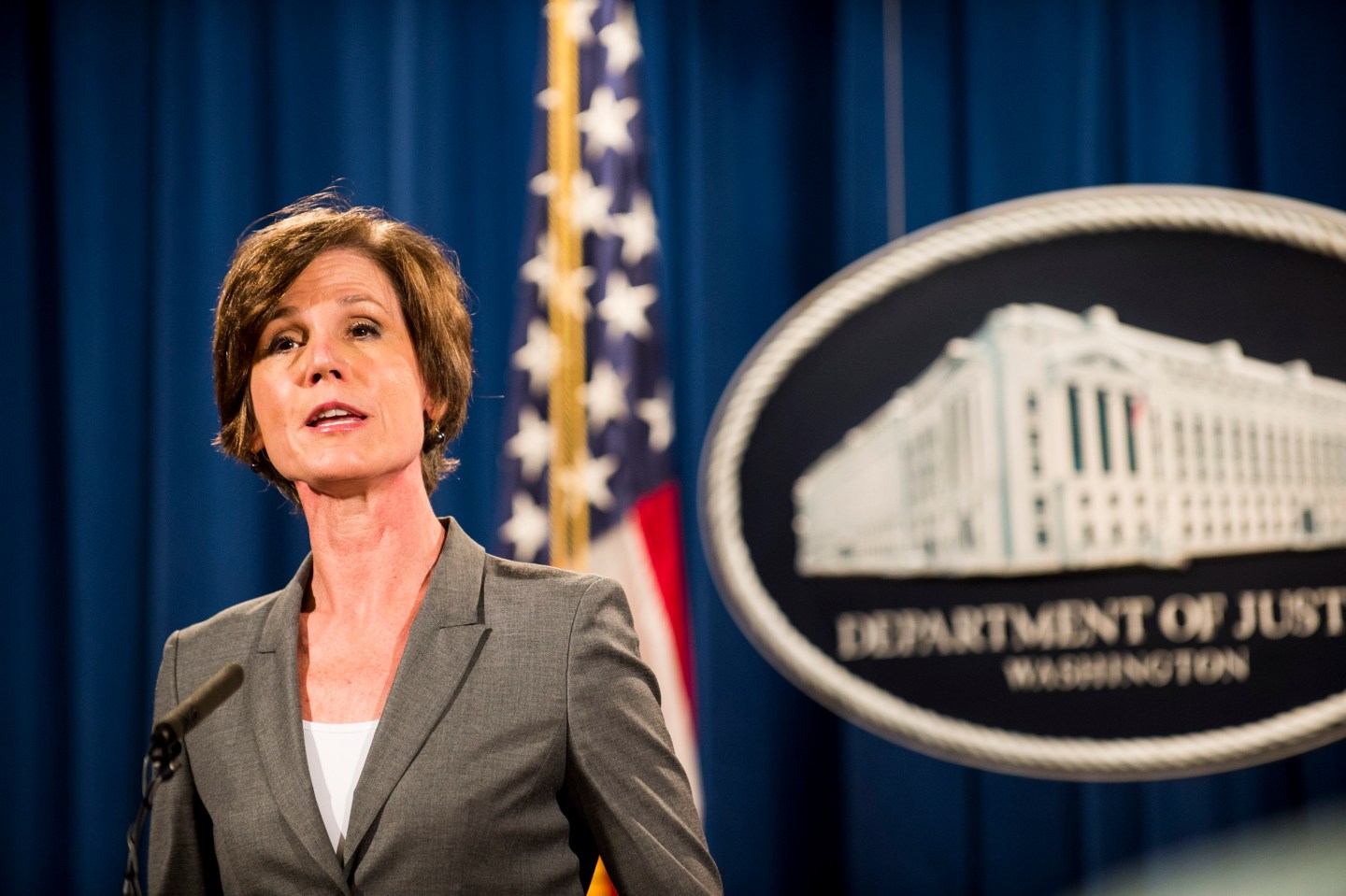 A lawyer for former deputy Attorney General Sally Yates wrote in letters last week that the Trump administration was trying to limit her testimony at congressional hearings focused on Russian meddling in the 2016 presidential election. The hearing was later canceled by the House intelligence committee chairman.

In the letters, attorney David O’Neil said he understood the Justice Department was invoking “further constraints” on testimony Yates could provide at a committee hearing that had been scheduled for Tuesday. He said the department’s position was that all actions she took as deputy attorney general were “client confidences” that could not be disclosed without written approval.

“We believe that the Department’s position in this regard is overbroad, incorrect, and inconsistent with the Department’s historical approach to the congressional testimony of current and former senior officials,” O’Neil wrote in a March 23 letter to Justice Department official Samuel Ramer.

The White House said today it did not interfere with Yates’ plans to testify.

“We have no problem with her testifying, plain and simple,” White House spokesman Sean Spicer said.

Yates’ lawyer said she still intended to testify and would not disclose any classified information. A requirement that she not discuss even non-classified material “is particularly untenable given that multiple senior administration officials have publicly described the same events,” O’Neil said.

House committee chairman Devin Nunes announced he was canceling the meeting on March 24, days after the committee’s first hearing in which FBI Director James Comey confirmed that the bureau was investigating President Donald Trump’s associates’ ties to Russia. Cancelling the hearing was one of several moves that have sparked outrage from Democrats on the committee. The typically bipartisan panel has been torn by disputes over Nunes’ ties to Trump’s campaign and questions about whether he can lead a probe independent of White House influence.

On Tuesday, Nunes rebuffed calls to step aside from the investigation.

“It’s the same thing as always around this place — a lot of politics, people get heated, but I’m not going to involve myself with that,” he said.

House Speaker Paul Ryan continued to express confidence in Nunes Tuesday, saying there is no need for the chairman to resign.

Virginia Sen. Mark Warner, the top Democrat on the Senate intelligence committee — which is also investigating the Russia ties — said White House meddling in Congress’ Russia investigations is not helping to “remove the cloud that increasingly is getting darker over the administration.”

The Washington Post first reported on the letters from Yates’ attorney. The missives were posted online and a person familiar with the situation confirmed them as authentic to The Associated Press. The person spoke on condition of anonymity to discuss the correspondence.

The White House called the Post story “entirely false” and said the administration had not taken any steps to block Yates from testifying at the hearing at which other Obama administration officials were also scheduled to testify.

O’Neil declined to comment Tuesday, and a Justice Department spokeswoman did not return a message seeking comment.

Yates, who was fired in January as acting attorney general after she refused to defend the Trump administration travel ban, was expected to be questioned about her role in the firing of Trump’s first national security adviser, Michael Flynn. Yates alerted the White House in January that Flynn had misled the White House about whether he had discussed sanctions in a December phone call with the Russian ambassador to the United States. Flynn was not ousted from the White House until the discrepancies were made public.

The hearing would have been another public airing of the infighting within the committee. Democrats on Monday called on Nunes to recuse himself from the investigation after he acknowledged he went to the White House complex to review intelligence reports and meet a secret source. Shortly afterward, Nunes announced that Trump associates’ communications had been were caught up in “incidental” surveillance, a revelation President Trump used to defend his unproven claim that his predecessor tapped the phones at Trump Tower.

The Republican congressman’s disclosure prompted the top Democrat on the committee, Rep. Adam Schiff, as well as the Democratic leaders in the House and Senate, to call on Nunes to recuse himself from the committee’s Russia probe.

Schiff said Nunes’ connections to the White House have raised insurmountable public doubts about whether the committee can credibly investigate the president’s campaign associates.

“I believe the public cannot have the necessary confidence that matters involving the president’s campaign or transition team can be objectively investigated or overseen by the chairman,” Schiff said in a statement Monday.

But Rep. Jackie Speier, D-Calif., a member of the committee, said Tuesday that Nunes should step down “in the interest of our integrity.” She said his actions raise questions about whether the panel’s investigation can be unbiased and independent.

“If you become a White House whisperer, you are not independent,” she said on CNN.

Nunes argues he had to review classified, executive branch documents from a secure facility at the White House because the reports had not been provided to Congress and could not be transported to the secure facilities used by the House intelligence committee. It is very unusual for a committee chairman and ranking member not to coordinate meetings related to an investigation.

Nunes would not name the source of the information, nor would he disclose who invited him on the White House grounds for the meeting. He described the source as an intelligence official, not a White House official. In an interview on CNN, he suggested the president’s aides were unaware of the meeting.