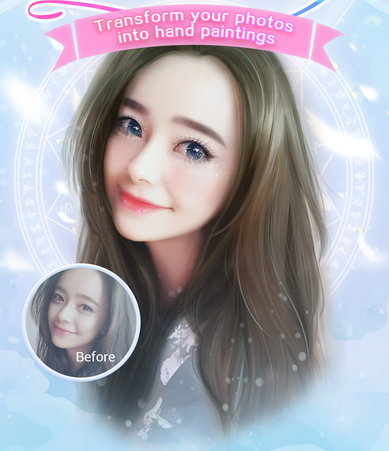 Chinese photo app owner and mobile phone maker Meitu’s net loss last year was down by 24%, the company reported on Friday, in its first results since its shares made their market debut in Hong Kong in December.

The company, which is known for the eponymous app’s selfie image-enhancing powers and aims to reach breakeven point some time this year, will now be stepping up efforts to gain more overseas users, Chairman Cai Wensheng told Reuters.

The expansion abroad will entail opening up new offices, possibly in Europe, and offering localized versions of its products.

“I think in two years we should be on par with Facebook and Google in user numbers,” Cai said.

“We do not rule out collaboration with smartphone giants by exporting our software technology,” Wu said.

He added that the firm plans to set up an artificial intelligence laboratory with leading universities this year and is also on track to launch Pushion, its fashion-focused social e-commerce platform in the first half of 2017.

Monthly active user numbers rose 32% to 520 million in January, including a 79% rise in overseas numbers.

Meitu’s share price has gained around 80% since last year’s listing, closing at HK$15.50 on Friday after volatile trading so far this month.

Cai said he did not think the company was being overvalued, comparing it with newly listed U.S. social media company Snap (SNAP), which has a market value of $27.5 billion.

Xiamen-based Meitu floated in December with a $630 million valuation, making it Hong Kong’s largest technology listing in a decade.

Meitu was among the top traded stocks after it was this month included among a list of stocks in a new trading link between Hong Kong and mainland China, sparking concerns of cross-border speculation.

“The current valuation of the stock strikes us as extremely generous, and seems to have factored in significant upside for which there is little evidence thus far to support such a degree of optimism,” said Ryan Roberts, an analyst at Hong Kong-based advisory MCM Partners.

Despite being known as a software company since its foundation in 2008, smartphone sales accounted for 93% of its revenue in 2016. Cai said the firm recorded a small profit from the sale of 750,000 phones last year, a volume that he said would “at least double” this year.

Wu said revenue outside phone sales, grouped as “Internet and others,” grew 40.1% last year to 104.7 million yuan, showing it was on track to make money from its user traffic, though the segment’s gross loss margin was higher at 55.1%.