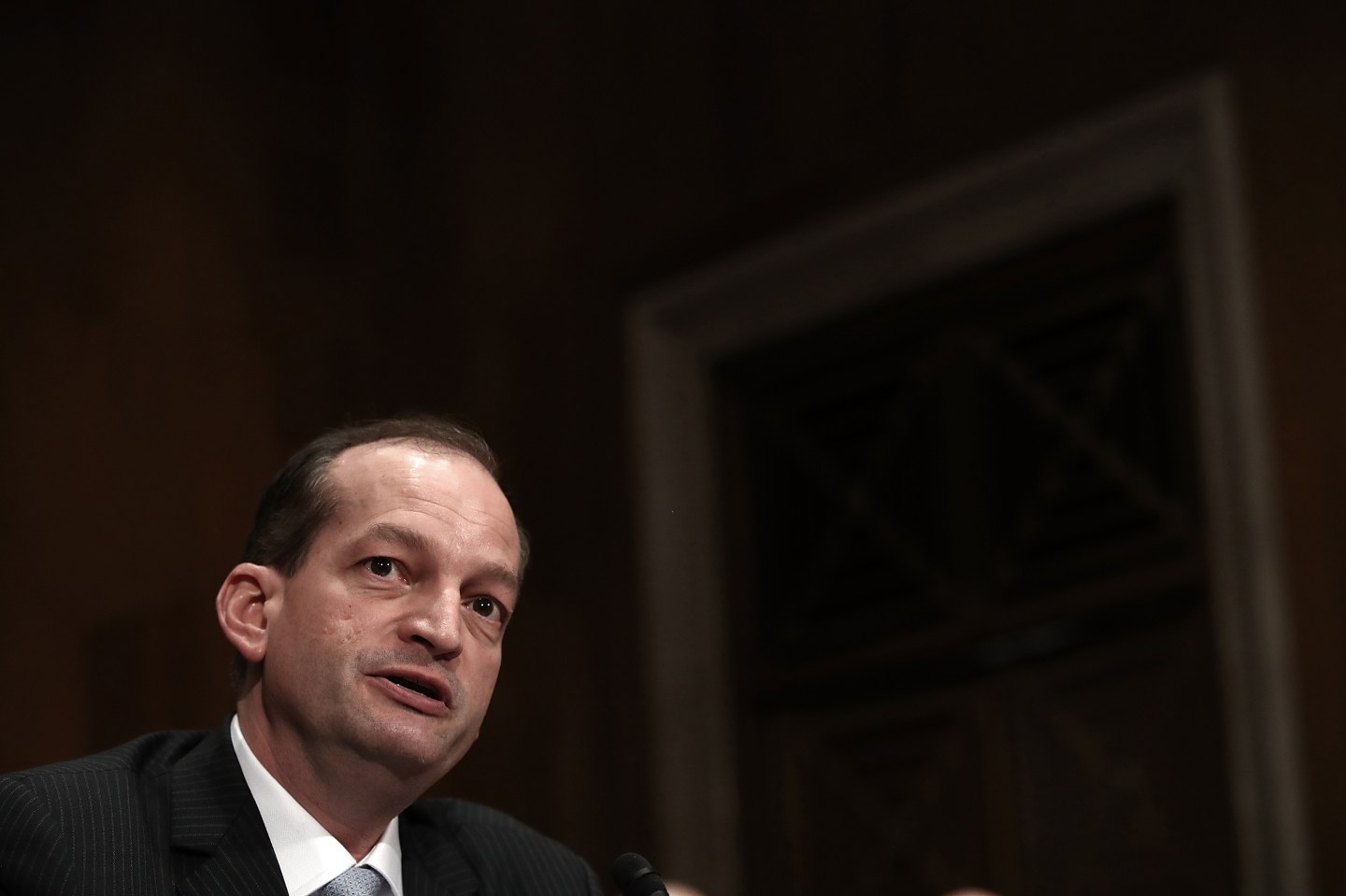 WASHINGTON, DC - MARCH 22: Labor Secretary nominee Alexander Acosta testifies before the Senate Health, Education, Labor and Pensions Committee during his confirmation hearing March 22, 2017 in Washington, DC. Acosta was questioned by members of the committee on his opinions relating to overtime rules during the early portion of the hearing. (Photo by Win McNamee/Getty Images)
Win McNamee Getty Images

Acosta told the Senate Committee on Health, Education, Labor and Pensions that the fiduciary rule, slated to take effect on April 10 but which the department has proposed delaying, goes “far beyond” regulating the conduct of investment advisers.

The Trump administration directed the department last month to review whether the Obama-era rule, which requires brokers offering retirement investment advice to put their clients’ interest first, was burdensome and out of step with current White House policies.

Acosta likewise expressed reservations about another Obama administration rule issued last year that more than doubled the salary ceiling under which employees would be eligible for overtime pay, from $23,660 to $47,476 a year.

Acosta said he had “serious questions as to whether the secretary of labor had the power to enact this in the first place.”

A federal judge in November blocked the rule, which extended mandatory overtime pay to more than 4 million salaried workers. The Trump administration must decide whether to defend the rule, and Acosta’s statements indicated that, if confirmed, he may decline to do so.

However, Acosta told senators he was sensitive to the fact that overtime rules have not been updated in more than a decade.

During the three-hour hearing, Acosta said that while he felt both Republicans and Democrats had the shared goal of protecting the interests of U.S. workers, they may disagree about the best courses of action.

Ultimately, Acosta told the panel, Cabinet secretaries are selected by Trump and tasked with deploying his administration’s vision.

“We work for the president, he is our boss, and so all Cabinet officials … will ultimately follow his direction unless we feel that we can’t and if we can’t, we resign,” Acosta said.

Acosta, a former member of the National Labor Relations Board and dean of the Florida International University College of Law in Miami, was nominated to be labor secretary in February, one day after Trump’s original choice, Andrew Puzder, withdrew.

Acosta has had a decades-long career in public service and has been through multiple Senate vettings for previous appointments, making it is unlikely his nomination will be derailed. If he clears the panel, Acosta will come up for a confirmation vote before the full Senate.