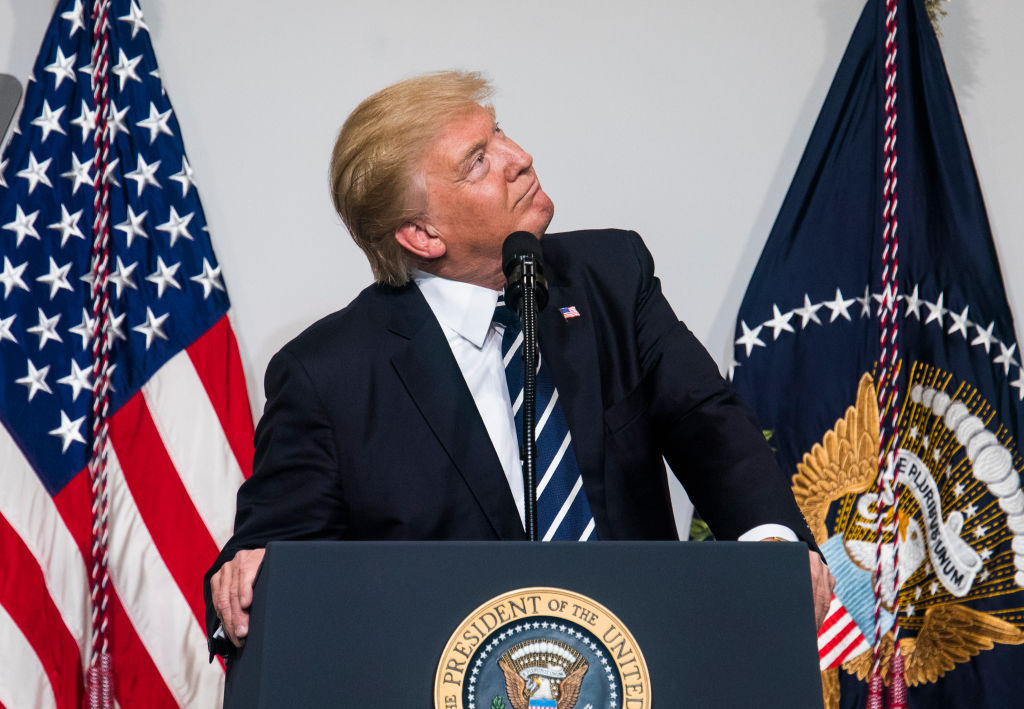 President Donald Trump tried to rally Republican lawmakers behind a plan to dismantle Obamacare on Tuesday as U.S. stock markets showed their worst one-day performance since the November election.

Trump is trying to win the first major legislative battle of his presidency. Pressure is growing on the businessman-turned politician to deliver as investors become worried that a failed healthcare push could also portend trouble for promised tax cuts and relaxed regulation that have propelled the market to record highs in recent months.

In one of the few visits he has made to the U.S. Capitol since taking office two months ago, Trump told fellow Republicans in the House of Representatives on Tuesday morning they would face “political problems” for opposing the bill that takes apart Obamacare and partially replaces it. Later in the day, Trump hosted roughly a dozen lawmakers in the Oval Office to listen to their concerns.

“The president was really clear: He laid it on the line for everybody,” House Speaker Paul Ryan, the leading proponent of the bill, told reporters. “We made a promise. Now is our time to keep that promise. … If we don’t keep our promise, it will be very hard to manage this.”

The S&P 500 and Dow Jones Industrial Average lost over 1% in their worst one-day performances since before Trump’s election victory on Nov. 8. The S&P financial index sank 2.87%, its biggest daily fall since June.

“You have this back and forth in Congress with the new healthcare plan and you have this belief that if the healthcare plan can’t pass, then they can’t move on to taxes. There’s this feeling that if things don’t get done, then maybe what the market has been anticipating gets held up,” said Mark Kepner, managing director at Themis Trading in Chatham, New Jersey.

Some conservative lawmakers believe the healthcare bill does not go far enough, while moderate Republicans worry that millions of Americans will be hurt by the dismantling of the 2010 Affordable Care Act, Democratic former President Barack Obama’s signature healthcare legislation.

Party leaders hope to move the bill to the House floor for debate as early as Thursday. But the administration and House leadership can afford to lose only about 20 Republican votes or risk the bill failing since Democrats are united against it.

Republican Representative Mark Meadows, chairman of the conservative House Freedom Caucus, said the roughly three dozen members have decided not to vote as a bloc. As many as 21 currently plan to vote no on the legislation, according to a CNN report.

Republican Representative Walter Jones said Trump told lawmakers in the closed-door meeting at the Capitol that if the Republican bill does not pass, they would face “political problems.” Jones said he thought Trump meant lawmakers could lose their seats.

Repealing and replacing Obamacare was one of Trump’s main campaign promises and has been a goal of Republicans since it was enacted.

While Trump predicted that Republicans could face challenges in primary contests ahead of the 2018 midterm elections if they do not gut Obamacare, there is also danger to them in doing so. If the Republican bill is passed, millions of voters might lose their healthcare coverage.

The Congressional Budget Office said last week that 14 million people would forfeit coverage under the House bill over the next year, although that number could change based on the most current version of the legislation.

Nancy Nielsen, associate dean for health policy at the University at Buffalo’s Jacobs School of Medicine, said Republican leaders were in a tough spot.

“It is a not-so-delicate balancing act, as they have to win over the most conservative House and Senate members without causing an outrageous backlash from voters now or in the next election,” Nielsen said.

Democrats oppose the Republicans’ plan, saying it would hurt the elderly, poor and working families while giving tax cuts to the wealthy.

Republican leaders tweaked the bill this week to try to satisfy critics, mainly from their own party.

Republican chairmen for two key committees said late Monday they proposed more funding for tax credits, which conservatives have opposed, that would give the Senate flexibility to help older people afford health insurance. Additionally, Obamacare’s taxes would be eliminated in 2017 instead of 2018.

The amendments also addressed Medicaid, which is the country’s largest health insurance program and covers about 70 million people, mostly the poor. The changes would allow states to implement work requirements for certain adults, an idea championed by many conservatives, and to decide how they receive federal funds.

Congressman Dan Donovan, who attended the Oval Office meeting on Tuesday, said Trump did “more listening than directing.” There was some “political talk” but “no threats,” he said.

Donovan, who has not announced whether he will support the bill, cited people losing Medicaid and the defunding of women’s healthcare provider Planned Parenthood as concerns in his New York district.

The Club for Growth, an influential conservative lobby group, said it would spend at least $500,000 for ads on television and digital platforms urging Congress members to defeat the bill.

The Senate also will vote on the legislation, and more changes could be made. Senate Majority Leader Mitch McConnell said that if the House approved a healthcare bill, he would try to bring it to the Senate floor next week.