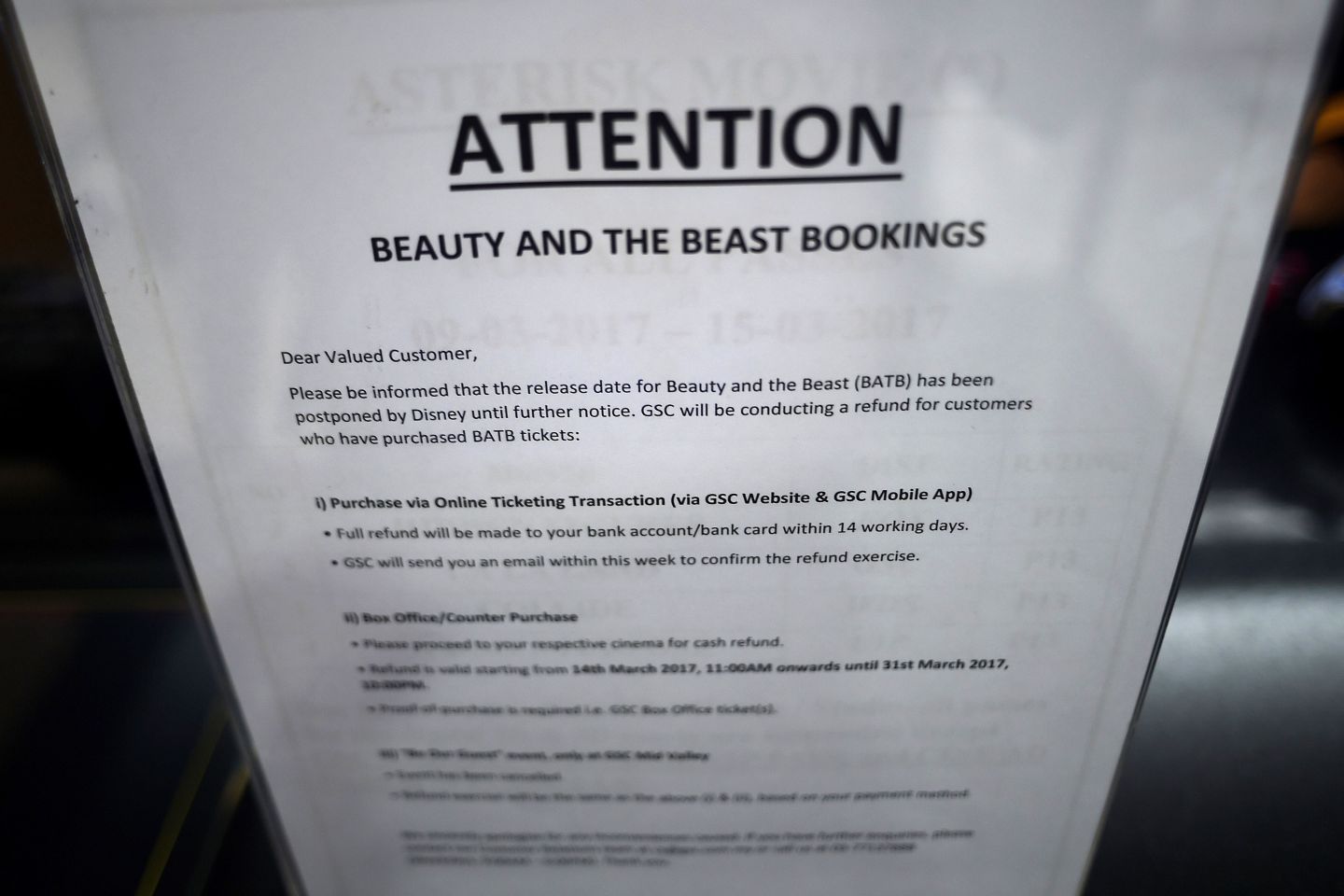 Major cinema chains in Muslim-majority Malaysia have postponed the release of Walt Disney’s ‘Beauty and the Beast,’ cleared by censors after a “gay moment” was cut, due to “unforeseen circumstances.”

The Walt Disney (DIS) film has courted controversy after the director, Bill Condon, first announced that it would feature a gay character – LeFou, the goofy sidekick to main villain Gaston – for the first time in Disney’s history.

Billboards and posters advertising the film, with a March 16 release date, had been displayed on buildings and along major roads all around Kuala Lumpur. But Malaysia’s largest cinema chains announced that the screenings had been held up.

“Due to unforeseen circumstances, the release of ‘Beauty and the Beast’ has been postponed until further notice,” TGV Cinemas said on its website, adding that it would refund customers who had bought tickets in advance.

Golden Screen Cinemas also had a similar notice on its website.

Walt Disney’s representatives in Kuala Lumpur could not be immediately reached for comment.

The gay character has sparked calls among some conservative groups elsewhere for the film to be boycotted. A U.S. evangelist preacher said last week that the film was trying to promote an LGBT agenda to children.

Malaysian Censorship Board chairman Abdul Halim Abdul Hamid said the movie has been given a P13 classification, meaning parental guidance is advisable for children under 13 years, after a “gay moment” was cut.

“Decision on classification and clearance was given a week ago,” he told Reuters. “We are not aware of postponement. Hope they screen the film soon,” he said.

Starring Emma Watson as young Belle who falls in love with the Beast, it is one of the most talked about Hollywood movies of the spring. According to some box office analysts, it could bring in upwards of $100 million in North America on its opening weekend.

Malaysia has previously blocked the release of Hollywood movies deemed religiously insensitive, such as 1998’s ‘The Prince of Egypt,’ which depicted the Biblical story of Moses, and 1995’s ‘Babe,’ which featured a pig as the main character. Muslims consider pigs unclean.

The postponement has sparked an outcry among some Malaysian film fans.

“They (the censors) are too sensitive… they should be open-minded, because it’s just a movie, just a story. Nothing else matters,” Jasrena Jasmih, an executive who works in Kuala Lumpur, told Reuters.

A Bishop in neighboring Singapore issued a statement on Saturday urging the clergy “to alert their congregation about the homosexual content” in the movie.

In a statement posted on the St Andrew’s Cathedral website, Bishop Rennis Ponniah said: “Disney films for children’s entertainment are usually associated with wholesome and mainstream values. But times are changing at a foundational level.”

Last year, Singapore organizers of the musical ‘Les Miserables’ cut a scene in which two male actors kiss after complaints from the public in the conservative city state where sex between men is illegal.

‘Beauty and the Beast,’ a live-action remake of Disney’s animated classic film, begins its worldwide rollout on Thursday.