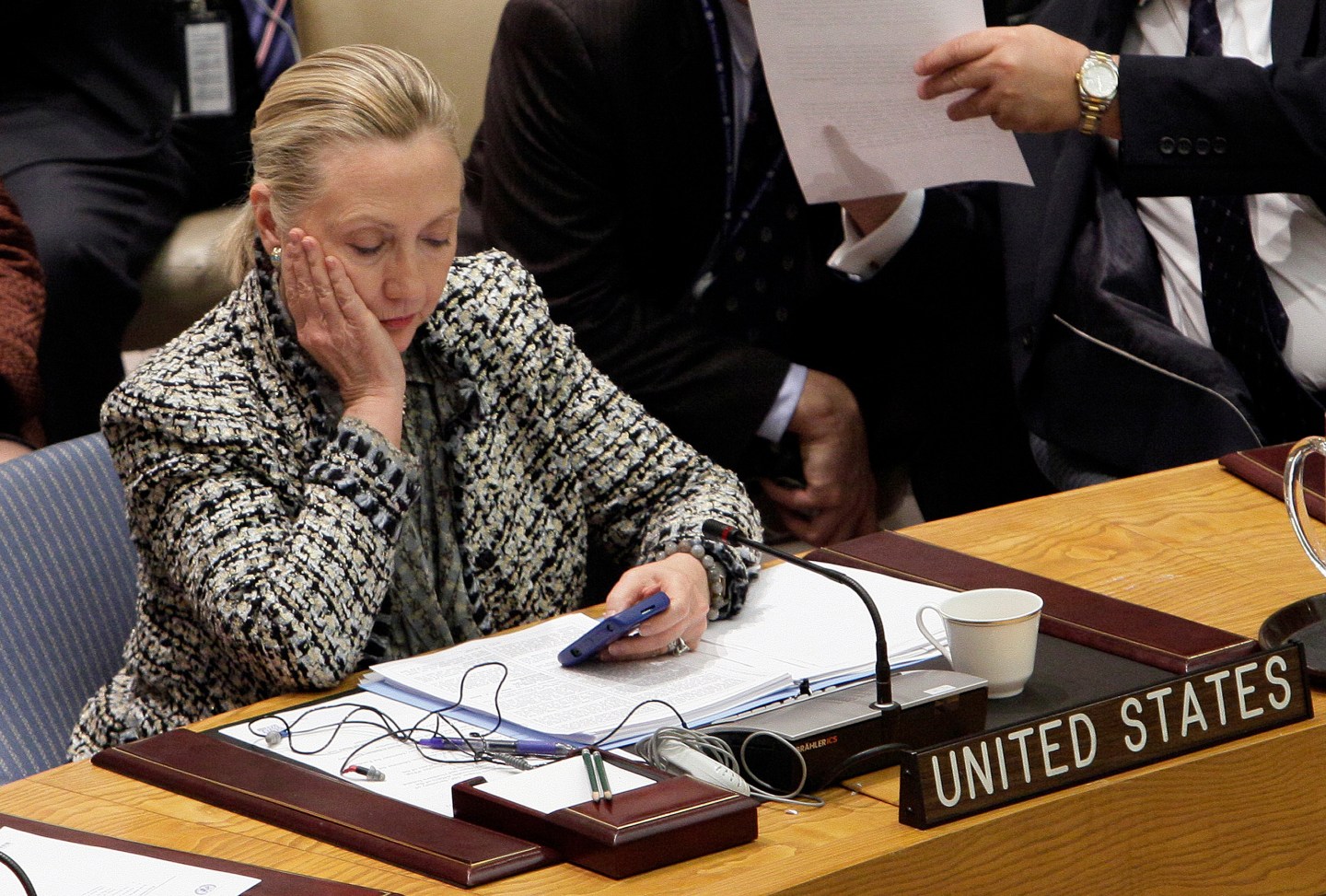 FILE - In this March 12, 2012, file photo, then-Secretary of State Hillary Clinton checks her mobile phone after her address to the Security Council at United Nations headquarters. In a rare step, the FBI on Friday, Sept. 2, 2016, published scores of pages about confidential interviews with Hillary Clinton and others from its recently closed investigation into the former secretary of state’s use of a private email server.. (AP Photo/Richard Drew, File)
Richard Drew—AP

Is “schadenfreude” trending? If it isn’t already, it probably will be soon.

That’s because a photo of former Democratic presidential candidate Hillary Clinton reading about the hack on Vice President Mike Pence’s emails when he was Governor of Indiana has the Internet in a tizzy this weekend.

As the unconfirmed but now-viral story goes, a passenger on the same short-haul flight as Clinton and her trusted advisor Huma Abedin from Boston’s Logan Airport to New York’s LaGuardia on Friday snapped an almost unbelievable smartphone photo. (Pictures, or it didn’t happen, right?) In the split-second moment, the passenger captured a relatively stable, non-fuzzy photo of Clinton reading that day’s issue of USA Today, with the headline above the fold: “Pence used personal email in office.”

You guys, my friend is on the same plane as Hillary Clinton. Zoom in on the title of the article she's looking at. pic.twitter.com/356oE9uT0s

Given how the debate over Clinton’s email practices and private servers were at the core of the bitter rhetoric of the 2016 presidential election, the Pence situation has critics questioning if there is a double standard in the public response—as well as that by Pence and Republican leaders—so far. Pence’s office has since responded that there was “no comparison whatsoever” between his use of a private email account for state business and Clinton’s while she was Secretary of State.

At the very least, it has many Internet users batting around the word “schadenfreude,” a German term referring to pleasure derived by someone from another person’s bad luck or misfortune. Thus, this single photo—much like another photo of Clinton reading while traveling—has also spawned numerous memes, many of which can be found on Twitter (TWTR) under the hashtag “#ButHerEmails.”

Clinton – Got hacked – So did Pence

Clinton – Wears pantsuits – So does Pence

GOP: Hillary Clinton's use of a private email is a criminal act and she should be in prison!

And in an even further meta moment, USA Today followed up with a report on the photo, too.