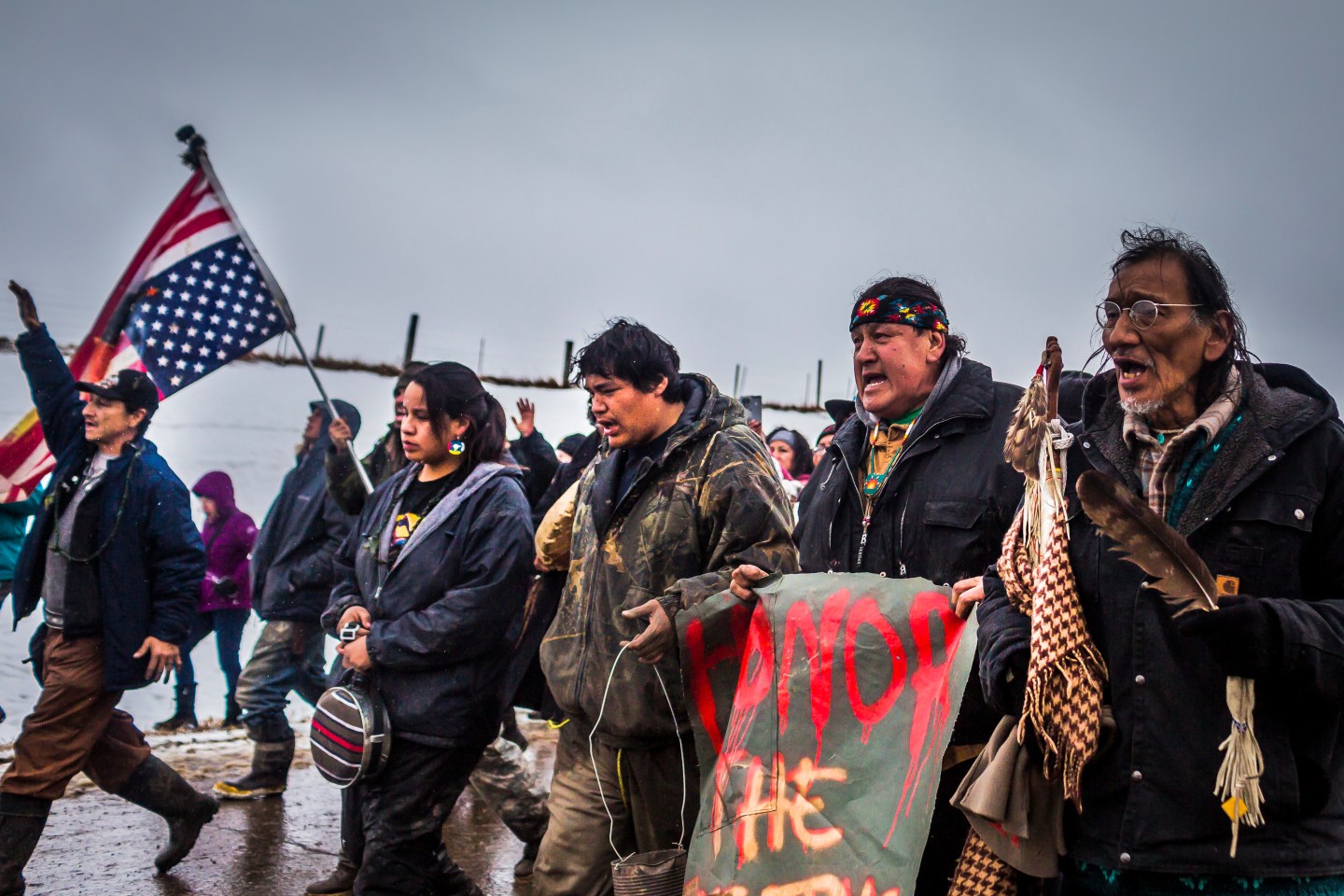 NORTH DAKOTA, UNITED STATES - 2017/02/22: Defiant Dakota Access Pipeline water protectors faced-off with various law enforcement agencies on the day the camp was slated to be raided. Many protesters and independent journalist, who were all threatened with multiple felony charges if they didn't leave were met with militarized police on the road abutting the camp. At least six were arrested, including a journalist who reportedly had sustained a broken hip. (Photo by Michael Nigro/Pacific Press/LightRocket via Getty Images)
Pacific Press LightRocket via Getty Images

Opponents of the Dakota Access Pipeline who were pushed out of their protest camp this week have vowed to keep up efforts to stop the multibillion-dollar project and take the fight to other pipelines as well.

The Oceti Sakowin camp in Cannon Ball, North Dakota, was cleared by law enforcement on Thursday and almost 50 people, many of them Native Americans and environmental activists, were arrested.

The number of demonstrators had dwindled from the thousands who poured into the camp starting in August to oppose the pipeline that critics say threatens the water resources and sacred land of the Standing Rock Sioux Tribe. The tribe has said it intends to fight the pipeline in court.

The 1,170-mile (1,885 km) line, built by Energy Transfer Partners LP, will move crude from the shale oilfields of North Dakota to Illinois en route to the Gulf of Mexico, where many U.S. refineries are located.

Tonya Olsen, 46, an Ihanktonwan Sioux from Sioux Falls, South Dakota, who had lived at the camp for 3-1/2 months, said she was saddened by the eviction but proud of the protesters.

She has moved to another nearby camp on Standing Rock Sioux Tribe reservation land, across the Cannon Ball River.

“A lot of people will take what they’ve learned from this movement and take it to another one,” Olsen said. She may join a protest if one forms against the Keystone XL pipeline near the Lower Brulé Sioux Reservation in South Dakota, she added.

Tom Goldtooth, a protest leader and executive director of the Indigenous Environmental Network, said the demonstrators’ hearts were not defeated.

“The closing of the camp is not the end of a movement or fight, it is a new beginning,” Goldtooth said in a statement on Thursday. “They cannot extinguish the fire that Standing Rock started.”

Many hope their fight against the project will spur similar protests targeting pipelines across the United States and Canada, particularly those routed near Native American land.

“The embers are going to be carried all over the place,” said Forest Borie, 34, a protester from Tijuana, Mexico, who spent four months in North Dakota.

“This is going to be a revolutionary year,” he added.

EPA Delays Rule for Miners to Give Cleanup Assurances

Borie wants to go next to Canada to help the Unist’ot’en Native American Tribe in their long-running opposition to pipelines in British Columbia.

Energy Transfer Partners, the Dallas-based company constructing the Dakota Access pipeline, is already facing pushback from a diverse base of opposition in Louisiana, where it is planning to expand its Bayou Bridge pipeline.

Other projects mentioned by protesters as possible next stops include the Sabal Trail pipeline being built to transport natural gas from eastern Alabama to central Florida, and Energy Transfer Partners’ Trans-Pecos in West Texas. Sabal Trail is a joint project of Spectra Energy Corp, NextEra Energy Inc and Duke Energy Corp.

Another protest is focused on Plains All American Pipeline’s Diamond Pipeline, which will run from Cushing, Oklahoma, to Valero Energy Corp’s Memphis refinery in Tennessee.

Anthony Gazotti, 47, from Denver, said he will stay on reservation land until he is forced out. Despite construction resuming on the Dakota pipeline, he said the protest was a success because it had raised awareness of pipeline issues nationwide. “It’s never been about just stopping that pipeline,” he said. June Sapiel, a 47-year-old member of the Penobscot Tribe in Penobscot, Maine, also rejected the idea that the protesters in North Dakota had failed.

“It’s waking people up,” she said in front of a friend’s yurt where she has been staying. “We’re going to go out there and just keep doing it.”