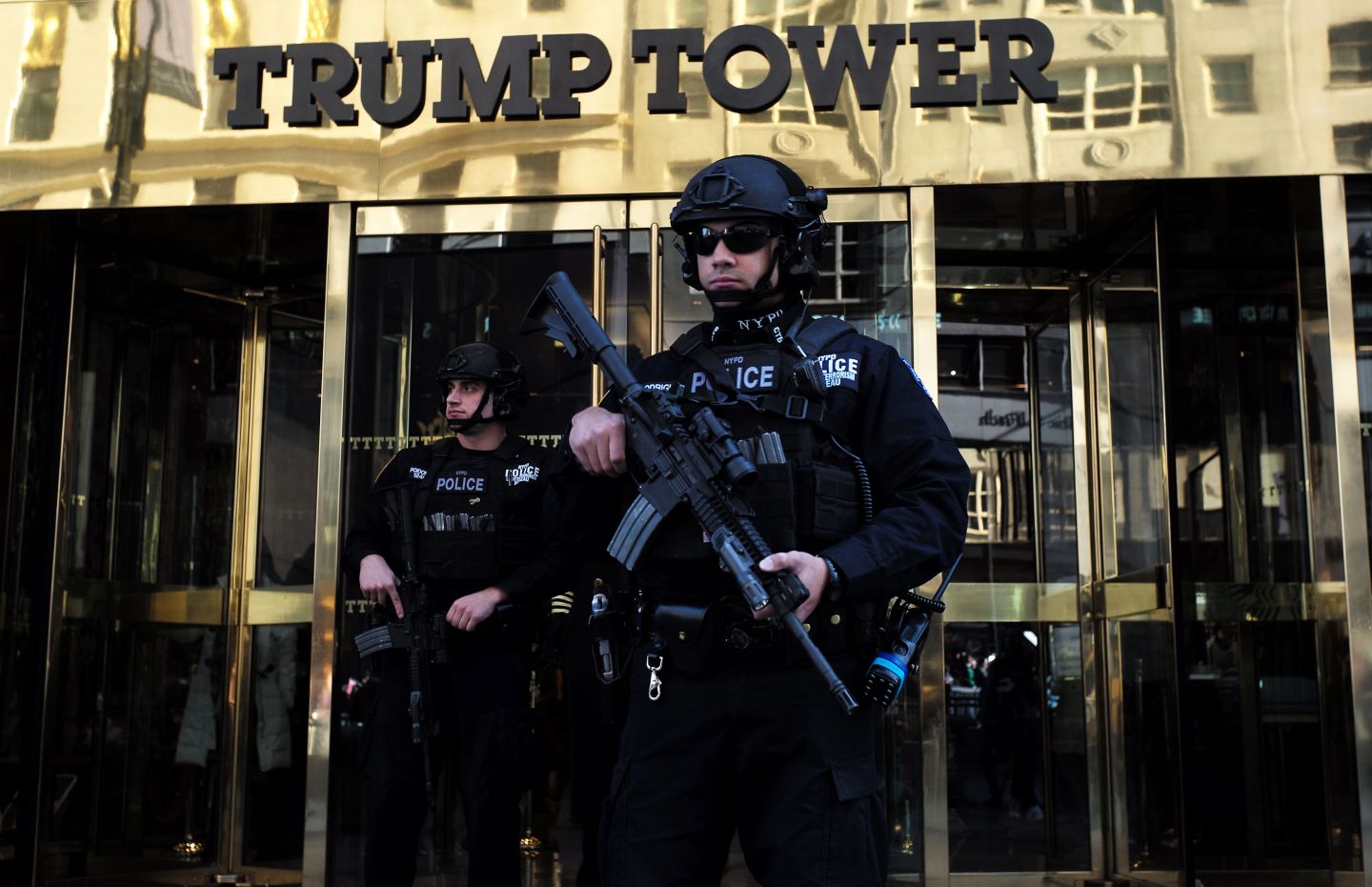 New York Police Department (NYPD) officers guard the main entrance of the Trump Tower, where US President-elect Donald Trump holds meetings, in New York on November 14, 2016. President-elect Donald Trump has vowed to move aggressively on a conservative agenda in filling Supreme Court vacancies, cracking down on immigration and cutting taxes, but also sought to reassure worried Americans they have nothing to fear from his presidency. / AFP / Jewel SAMAD (Photo credit should read JEWEL SAMAD/AFP/Getty Images)
Photograph by Jewel Samad—AFP/Getty Images

The revelation prompted renewed calls for Congress to reimburse the city for the cost of protecting Trump’s private residence on Manhattan’s Fifth Avenue, where his wife and their son continue to reside.

“We are seeking full federal reimbursement for all costs incurred related to security for President Trump and his family at Trump Tower,” Freddi Goldstein, a spokeswoman for Mayor Bill de Blasio, wrote in an email to Reuters.

New York City Police Commissioner James O’Neill said in a statement that the Police Department now has a dual role in protecting the first family while also serving and protecting residents in the city.

“Trump Tower itself now presents a target to those who wish to commit acts of terror against our country, further straining our limited counterterrorism resources,” O’Neill said.

Trump’s spokespeople could not be reached immediately for comment.

De Blasio asked the U.S. government in December for up to $35 million to cover security costs for protecting Trump in his home atop the 58-story skyscraper, which is located on Fifth Avenue near Central Park, an area popular with tourists.

At $24 million, the final cost was less than that. Trump spent most of his time from Election Day on Nov. 8 until his inauguration on Jan. 20 at his penthouse apartment in Trump Tower.

For more on Trump’s cost to the taxpayer, watch Fortune’s video:

In addition to the police protection, the Fire Department incurred $1.7 million in costs during the time period Trump was in New York, according to O’Neill.

On days when first lady Melania Trump and the couple’s son, Barron, are the only ones in the city, security going forward will cost between $127,000 and $145,000 per day, less than when the president is in residence, O’Neill said.

When Trump is in town, the cost of police protection will go back up to $308,000 on average per day, O’Neill said. It will cost about another $4.5 million per year for the New York City Fire Department to protect the building, he said.

“We anticipate these costs will increase significantly whenever the president is in New York City,” he said.

Trump has not been back to Manhattan since his inauguration.

New York Congresswoman Carolyn Maloney said in a statement on Wednesday that the city’s taxpayers should not be forced to pay for a “national security obligation” and that “Congress must provide city taxpayers a full reimbursement.”