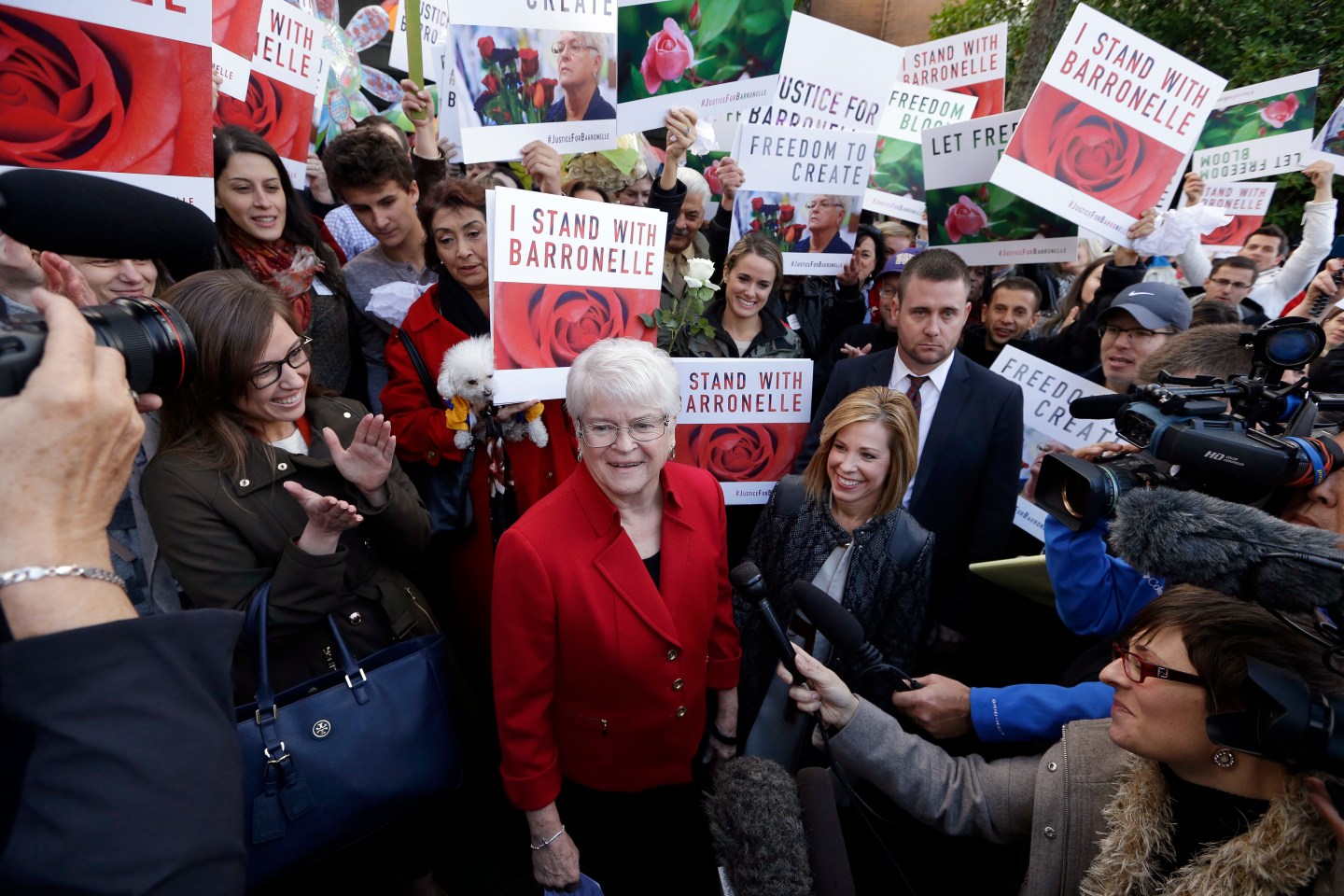 Barronelle Stutzman, center, a Richland, Wash., florist who was fined for denying service to a gay couple in 2013, smiles as she is surrounded by supporters after a hearing before Washington's Supreme Court, Tuesday, Nov. 15, 2016, in Bellevue, Wash.
Elaine Thompson—AP

It’s against the law for a florist to refuse a same-sex couple service, the Washington Supreme Court ruled on Thursday.

Back in 2013, Robert Ingersoll and his partner, Curt Freed, tried to buy wedding flowers from Barronelle Stutzman and were refused, according to court documents. Stutzman is the owner of Arlene’s Flowers and Gifts in Richland, Wash., where Ingersoll said he was a customer for at least nine years before his wedding request. Stutzman — an active member of the Southern Baptist church — said she would not be able to help the couple given her religious beliefs and conviction that “biblically marriage is between a man and a woman.”

This took an “emotional toll” on the couple, according to the documents, and as a result the pair “lost enthusiasm for [the] large ceremony.” The two put their wedding plans on hold out of fear other vendors would make similar refusals.

The Attorney General’s Office asked Stutzman to stop discriminating against customers, in addition to signing an “Assurance of Discontinuance. When she refused, the State filed a formal complaint against both Stutzman and Arlene’s Flowers, while Ingersoll and Freed filed a private lawsuit.

The Benton County Superior Court ruled in favor of Ingersoll and Freed and issued Stutzman a fine, which she then tried to appeal. Though the Washington Supreme Court granted her ra review, the court ruled unanimously on Feb. 16 that she broke the state’s anti-discrimination law when refusing the couple service.

The ruling was hailed a victory among gay and civil rights groups and campaigners, the New York Times reports. However, it has been criticized by various religious groups and individuals, many of whom are using the hashtag ‘#StandWithBarronelle.’ The Alliance Defending Freedom even set up a website asking for donations to “help Barronelle get justice.” But according to the Times, a lawyer for the florist said would be appealed to the United States Supreme Court.