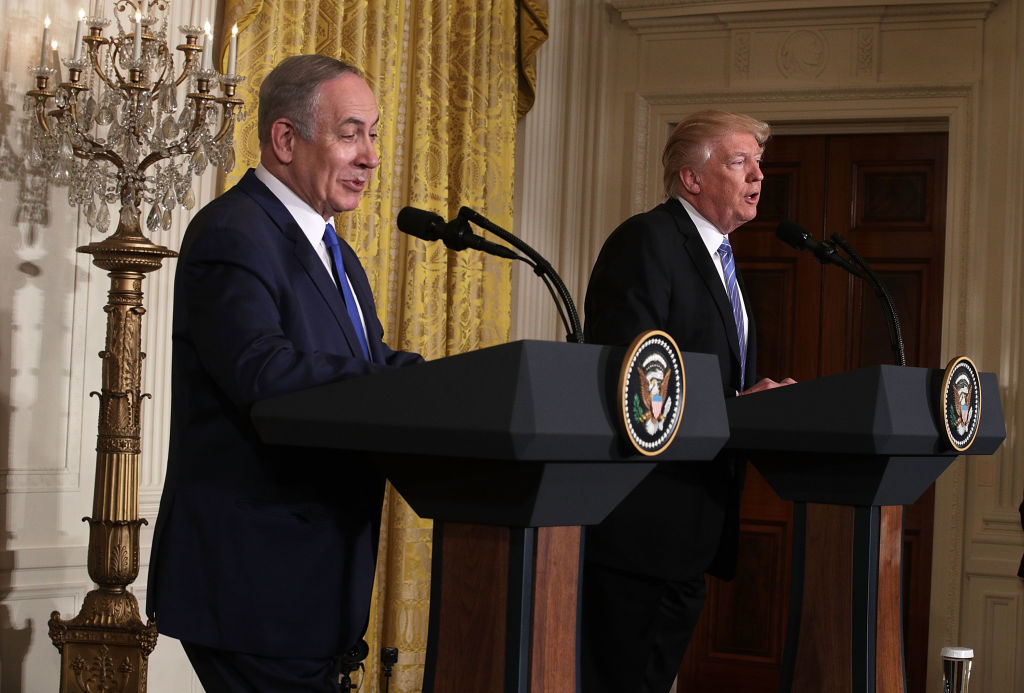 President Donald Trump on Wednesday dropped a U.S. commitment to a two-state solution to the Israeli-Palestinian conflict, the longstanding bedrock of Washington’s Middle East policy, even as he urged Israeli Prime Minister Benjamin Netanyahu to curb settlement construction.

In the first face-to-face meeting between the two leaders since Trump’s victory in the 2016 election, the Republican president backed away from a U.S. embrace of the eventual creation of a Palestinian state, upending a position taken by successive administrations and the international community.

“I’m looking at two states and one state, and I like the one both parties like,” Trump told a joint news conference with Netanyahu. “I can live with either one.”

Trump vowed to work toward a peace deal between Israel and Palestinians but said it would require compromise on both sides, leaving it up to the parties themselves ultimately to decide on the terms of any agreement.

But he offered no new prescription for achieving an accord that has eluded so many of his predecessors, and Palestinian anger over his abandonment of their goal of statehood could scrap any chance of coaxing them back to the negotiating table.

Dropping a bombshell on Netanyahu as they faced reporters just before sitting down for talks, Trump told him: “I’d like to see you hold back on settlements for a little bit.”

The right-wing Israeli leader appeared momentarily startled. It was a rare concession sought by Trump as the two leaders tried to set a new positive tone after eight years of friction under Trump’s Democratic predecessor, President Barack Obama.

For more on the two-state solution, watch Fortune‘s video:

Netanyahu insisted that Jewish settlements were “not the core of the conflict” and made no public commitment to reduce settlement building in the occupied West Bank. He later told reporters traveling with him that he hoped to “reach an understanding” with Trump on settlements.

Trump echoed Netanyahu‘s calls for Palestinians to recognize Israel as a Jewish state – something they have refused to do – and to halt incitement against Israelis.

But even as Trump promised to pursue peace, saying “it might be a bigger and better deal than people in this room even understand,” he made no effort to address the deep distrust and other obstacles that have prevented any substantive negotiations since 2014.

Among the questions that figured prominently on the agenda was the future of the two-state solution – the idea of creating a Palestine living peacefully alongside Israel.

Foreshadowing Trump’s policy shift, a senior White House official said on Tuesday that peace did not necessarily have to entail Palestinian statehood. Palestinians responded by warning Trump that such a move would seriously damage U.S. credibility.

Giving a meandering response to a question on the issue, Trump suggested that he could abide by whatever path the two sides decided. “I’m happy with the one they like the best,” he said.

Palestinian President Mahmoud Abbas seized on Trump’s settlements comment to demand a complete halt to such building – which Palestinians see as meant to deny them a viable state – and said he remained committed to “the two-state solution and to international law.”

United Nations Secretary-General Antonio Guterres warned against abandoning the idea of a sovereign Palestinian state alongside Israel, saying there was “no alternative.”

Netanyahu committed, with conditions, to the two-state goal in a speech in 2009 and has broadly reiterated the aim since. But he has also spoken of a “state minus” option, suggesting he could offer the Palestinians deep-seated autonomy and the trappings of statehood without full sovereignty.

At the news conference, he never ruled out a two-state solution, but also made it sound like an almost impossible ideal. He said it would require preconditions, including the Palestinians’ recognition of Israel as a Jewish state and Israel’s retaining security control “in the area west of the Jordan River” – which would encompass all of the West Bank.

Netanyahu and Trump shared several warm handshakes during the news conference, especially after Trump’s opening remarks, when he said the United States was Israel’s greatest friend.

But Trump also managed to catch Netanyahu off guard, at one point saying that if a solution to the Israel-Palestinian conflict was going to be reached “both sides will have to make compromises.” The president then turned to Netanyahu and said: “You know that, right?” Netanyahu replied with a chuckle, “Both sides.”

The two leaders agreed that there was an opening for enlisting Israel’s Arab neighbors – which share its concerns about Iran – into any future peace efforts. But a retreat from the principle of Palestinian statehood would cast doubt on the chances for cooperation from the broader Arab world.

“A nail in the coffin”

Martin Indyk, a former Middle East negotiator under Obama and now at the Brookings Institution think tank in Washington, said of the possibility that Washington might ditch its support for an independent Palestinian nation, “It’s another nail in the coffin of the peace process, which already had a lot of nails in it.”

The one-state idea would be deeply problematic for both sides. One concept would be two systems for two peoples, which Palestinians would see as apartheid. Another version would mean equal rights for all, including for Palestinians in an annexed West Bank, but that would compromise Israel’s Jewish character.

Palestinians have expressed fear that their leadership will be frozen out by Netanyahu‘s close bond with Trump. But CIA director Mike Pompeo met Abbas in Ramallah on Tuesday, U.S. and Palestinian officials said.

For Netanyahu, the talks with Trump are an opportunity to reset ties after a frequently combative relationship with Obama.

The prime minister, under investigation at home over allegations of abuse of office, wanted no visible gaps between U.S. and Israeli thinking during his visit.

Trump, who has been in office less than four weeks and whose foreign policy apparatus is in disarray following the forced resignation of his national security adviser Michael Flynn, brings with him an unpredictability that Netanyahu‘s staff hoped would not impinge on the discussions.

The two leaders, who seemed to strike up an emerging “bromance” in social media exchanges since the U.S. election, sought to demonstrate good personal chemistry face-to-face as well.

Meetings with Obama were at best cordial and businesslike, at worst tense and awkward. In one Oval Office encounter in 2011, Obama grimaced as Netanyahu lectured him in front of the cameras on the suffering of the Jewish people through the ages.