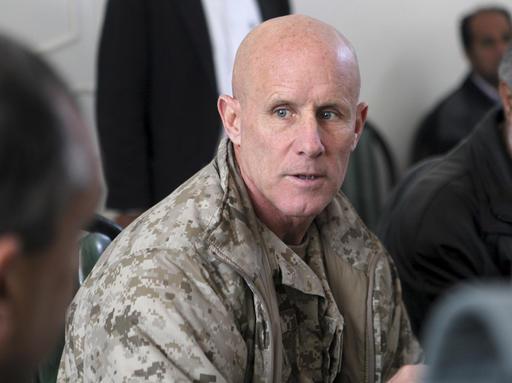 In this image provided by the U.S. Marine Corps, Vice Adm. Robert S. Harward, commanding officer of Combined Joint Interagency Task Force 435, speaks to an Afghan official during his visit to Zaranj, Afghanistan, Jan 6, 2011. Harward has turned down an offer to be President Donald Trump's new national security adviser, the latest blow to a new administration struggling to find its footing. A senior White House official said Feb. 16, 2017, that Harward had turned the offer down due to financial and family commitments. (Sgt. Shawn Coolman/U.S. Marine Corps via AP)
Sgt. Shawn Coolman/U.S. Marine Corps via AP

Vice Admiral Robert Harward has turned down an offer to be President Donald Trump’s new national security adviser, the latest blow to a new administration struggling to find its footing.

Harward told The Associated Press that the Trump administration was “very accommodating to my needs, both professionally and personally.”

“It’s purely a personal issue,” Harward said Thursday evening. “I’m in a unique position finally after being in the military for 40 years to enjoy some personal time.”

Asked whether he had requested to bring in his own staff at the National Security Council, Harward said, “I think that’s for the president to address.”

Following Flynn’s ouster, administration officials said his deputy, KT McFarland, was staying on at the NSC. McFarland is a former Fox News analyst.

Harward would have replaced retired Gen. Michael Flynn, who resigned at Trump’s request Monday after revelations that he misled Vice President Mike Pence about discussing sanctions with Russia’s ambassador to the U.S. during the transition. Trump said in a news conference Thursday that he was disappointed by how Flynn had treated Pence, but did not believe Flynn had done anything wrong by having the conversations.

Upon retirement in 2013 after a nearly 40-year career in the Navy, Harward became chief executive officer for defense and aerospace giant Lockheed Martin in the United Arab Emirates. Trump has recently been in very public negotiations with Lockheed over the cost of its F-35 fighter jet.

Officials said earlier this week that there were two other contenders in the running for the job: acting national security adviser Keith Kellogg and retired Gen. David Petraeus.

Petraeus, a retired four-star general, resigned as CIA director in 2012 and pleaded guilty to one misdemeanor charge of mishandling classified information relating to documents he had provided to his biographer, with whom he was having an affair.