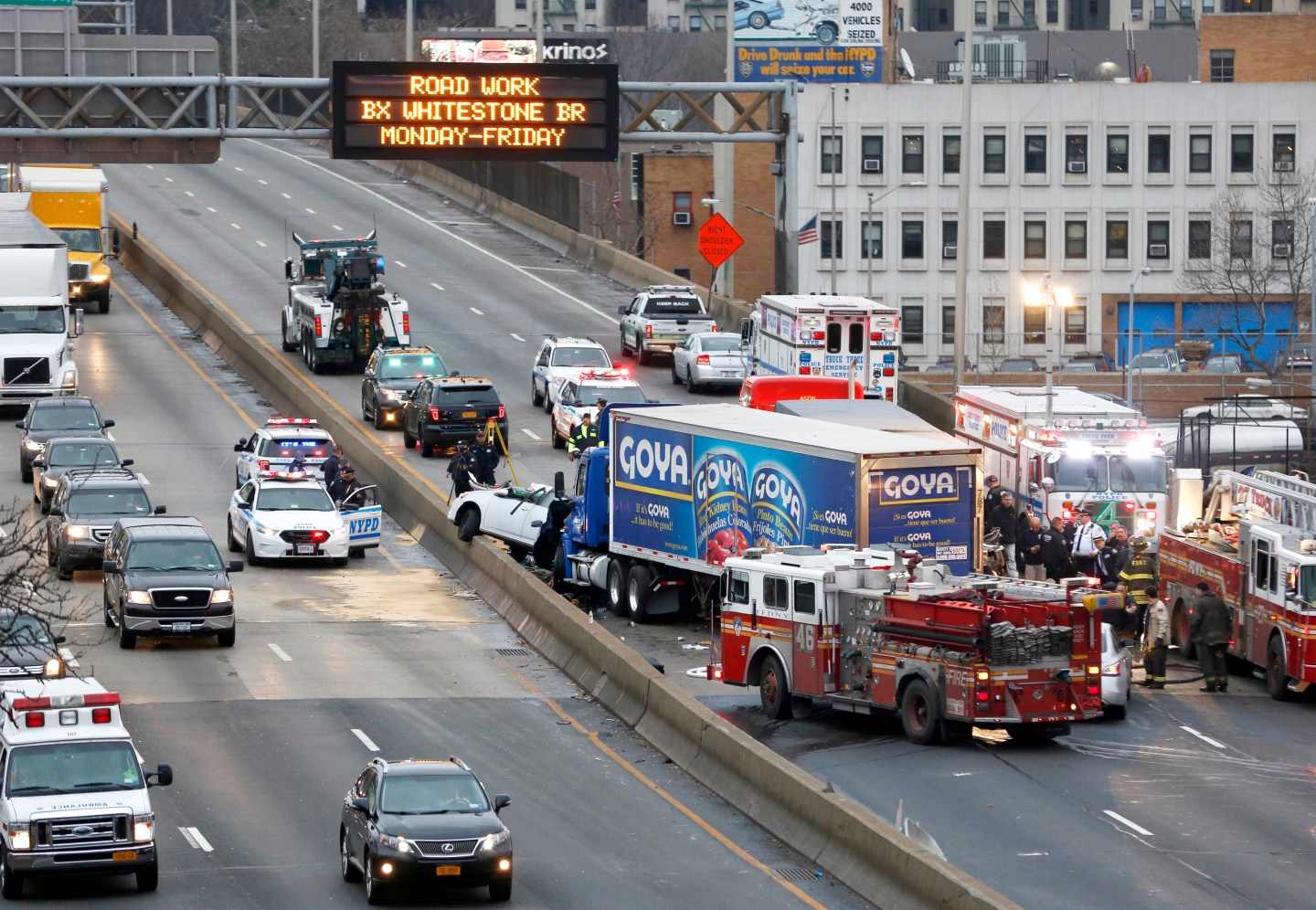 Emergency personnel work at the scene of a fatal multi-vehicle crash on the eastbound side of the Bronx Expressway in the Bronx section of New York, Tuesday, Dec. 27, 2016. Authorities said a tractor-trailer crashed into several cars. (AP Photo/Seth Wenig)
Seth Wenig — AP

Lower gas prices and and increased motor-vehicle mileage combined with risky activities like speeding and driving while texting is proving deadly for American drivers.

New preliminary 2016 data shared Wednesday from the National Safety Council estimates that as many as 40,000 people died in motor vehicles crashes last year, a 6% rise from 2015. If those numbers bear out, it would be a 14% increase in deaths since 2014, the biggest two-year jump in more than five decades.

Crashes result in the very real cost of human life. But there are also millions more who are seriously injured—an estimated 4.6 million in 2016 according to NSC—and a financial cost to society as well. NSC estimates the cost of motor-vehicle deaths, injuries, and property damage in 2016 was $432 billion, a 12% increase from the previous year. Those costs include losses in wages and productivity, medical expenses, property damage, employer costs and administrative expenses, the NSC says.

The data comes one day after Toyota Research Institute CEO Gill Pratt, along with other executives from ride-hailing company Lyft, Volvo Car Group, and General Motors testified before a House subcommittee about deploying autonomous vehicles and the potential for this technology to greatly reduce traffic injuries and fatalities.

In October, the National Highway Traffic Safety Administration released traffic fatality statistics for the first half of 2016 that were equally abysmal. NHTSA reported, at the time, that there were 17,775 deaths on the road in the first half of the year, up 10.4% from the same period in 2015.

While both should be noted that NHTSA and NSC both paint a grim picture, the two entities calculate traffic death rates differently. NSC uses data from the National Center for Health Statistics, an arm of the CDC. It counts both traffic and non-traffic deaths that occur within a year of the accident, while NHTSA counts only traffic deaths that occur within 30 days. NSC’s data also counts crashes on both public and private roadways such as parking lots and driveways.

The NSC also released Wednesday a survey conducted by Toluna Group that shows the kinds of high-risk activities drivers are doing while on the road. The survey asked more than 2,000 people who drive at least 15 minutes on a typical weekday a series of questions about driver safety and actions taken while behind the wheel.

The survey released shows drivers are concerned about safety. Some 83% of respondents said driving is a safety concern. But that hasn’t stopped many of them from speeding, texting, or driving while impaired by alcohol, prescription medication, or marijuana.