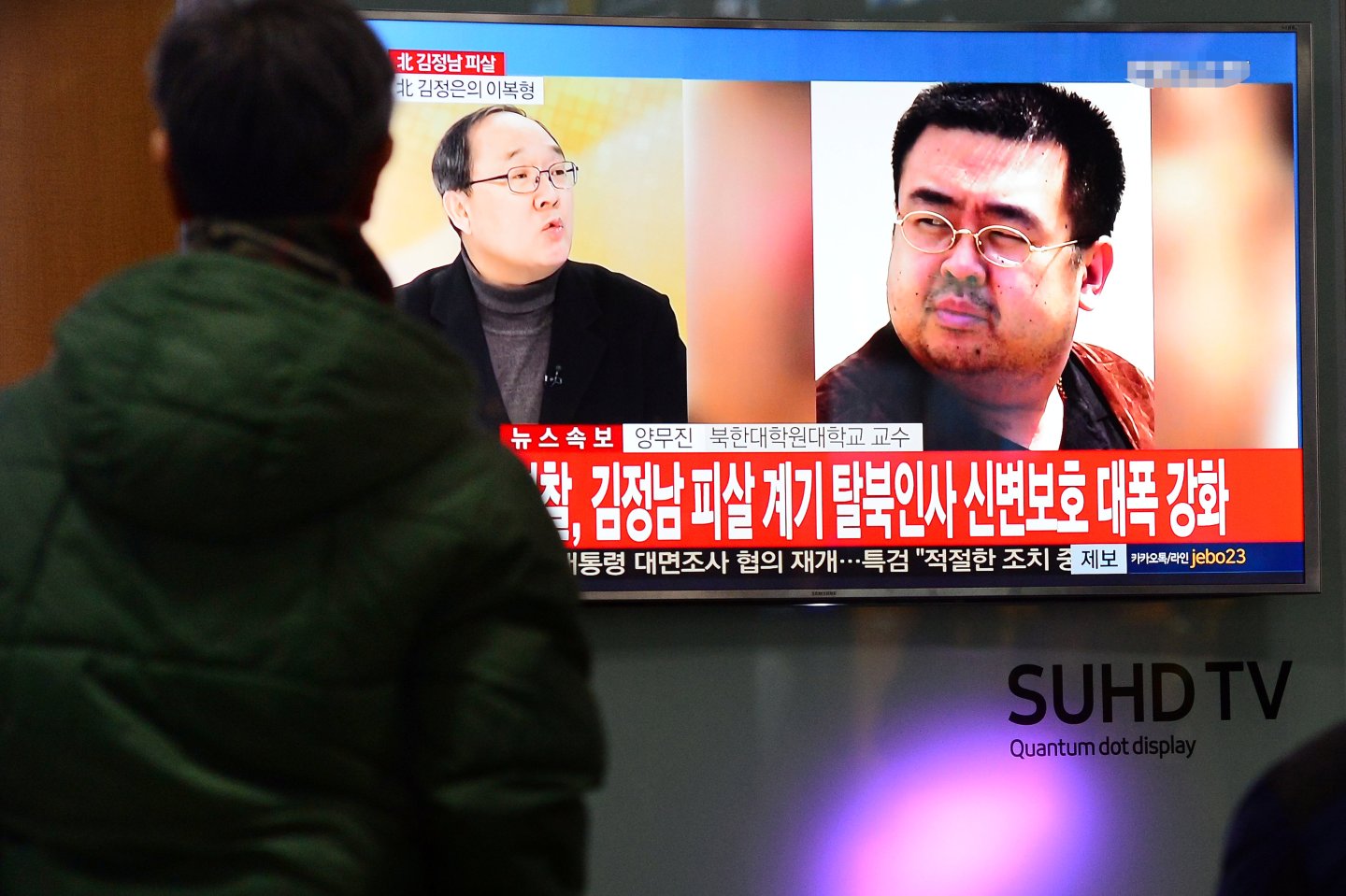 People watch a TV screen broadcasting a news report on the assassination of Kim Jong Nam, the older half brother of the North Korean leader Kim Jong Un, at a railway station in Seoul, South Korea, February 14, 2017. Lim Se-young/News1 via REUTERS ATTENTION EDITORS - THIS IMAGE HAS BEEN SUPPLIED BY A THIRD PARTY. SOUTH KOREA OUT. FOR EDITORIAL USE ONLY. NO RESALES. NO ARCHIVE.
Lim Se-young/News1 via REUTERS

U.S. government sources also told Reuters they believed that Kim Jong Nam, who according to Malaysian police died on Monday on his way to hospital from Kuala Lumpur International Airport, had been murdered by North Korean assassins.

They said the spy agency told them that the young, unpredictable North Korean leader had issued a “standing order” for his half-brother’s assassination, and that there had been a failed attempt in 2012.

According to the spy agency, Kim Jong Nam had been living with his second wife in the Chinese territory of Macau, under Beijing’s protection, the lawmakers said. One of them said Kim Jong Nam also had a wife and son in Beijing.

Portly and gregarious, Kim Jong Nam had spoken out publicly against his family’s dynastic control of the isolated state.

“If the murder of Kim Jong Nam was confirmed to be committed by the North Korean regime, that would clearly depict the brutality and inhumanity of the Kim Jong Un regime,” South Korean Prime Minister Hwang Kyo-ahn, the country’s acting president, told a security council meeting.

The meeting was called in response to Kim Jong Nam’s mysterious death, news of which first emerged late on Tuesday.

South Korea is acutely sensitive to any sign of potential instability in North Korea, and is still technically in a state of war with its impoverished and nuclear-armed neighbor.

Malaysian police said the dead man, 46, held a passport under the name Kim Chol. Kim Jong Nam was known to spend a significant amount of time outside North Korea, traveling in Macau and Hong Kong as well as mainland China, and has been caught in the past using forged travel documents.

Malaysian police official Fadzil Ahmat said on Tuesday the cause of Kim’s death was not yet known, and that a post-mortem would be carried out. Kim had been planning to travel to Macau on Monday when he fell ill at KLIA’s low-cost terminal, Fadzil said.

Kim’s body was taken on Wednesday morning to a second hospital, where an autopsy was being performed.

A Malaysian police source who had seen closed-circuit TV footage from the airport said a woman was involved in the attack.

“So far from the CCTV we can confirm it’s a woman,” the source said.

Asked during a news briefing if the murder of Kim Jong Nam was confirmed, South Korean Unification Ministry spokesman Jeong Joon-hee said: “Yes, I have said it is confirmed.”

South Korea‘s TV Chosun, a cable-TV network, cited multiple South Korean government sources saying that Kim had been poisoned with a needle by two women believed to be North Korean operatives who fled in a taxi.

Reuters could not independently confirm those details.

Officials at the North Korean embassy in Kuala Lumpur would not speak to reporters gathered outside its gate and refused them entry. A few cars were seen leaving the embassy.

South Korea‘s Unification Ministry urged North Korean defectors in South Korea and abroad to be mindful of their security.

Malaysia is one of a dwindling number of countries that has close relations with North Korea, whose nuclear tests and ballistic missile launches – the latest of which took place on Sunday – have provoked global sanctions.

Malaysians and North Koreans can visit each other’s country without visas.