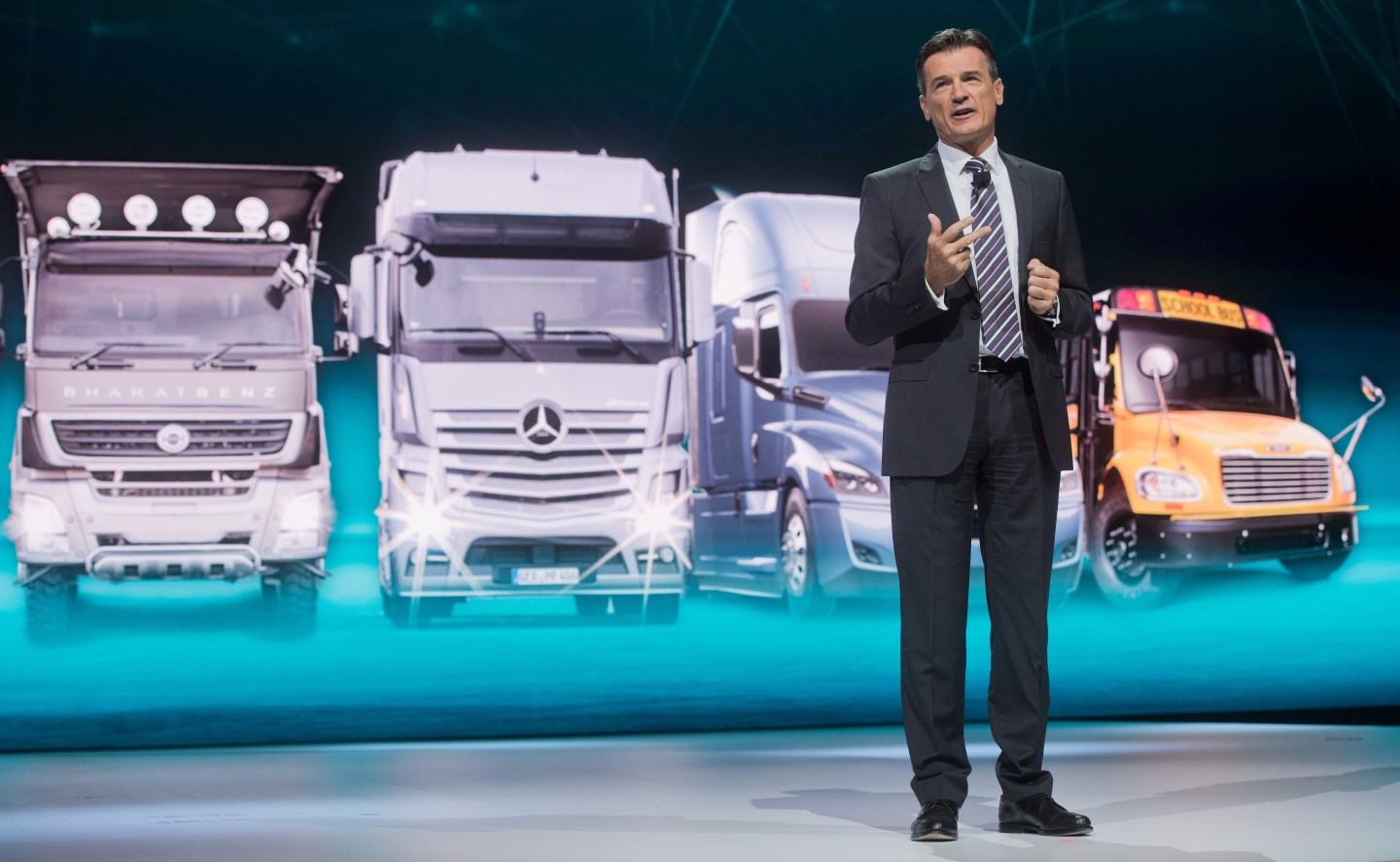 Wolfgang Bernhard, board member of Daimer AG and director of Daimer Trucks & Buses, gives a press conference at the Daimer stand at the 66th IAA Commerical Vehicles trade fair in Hanover, Germany, 21 September 2016. Around 2,000 exhibitors from 52 countries are presenting alternative engines, autonomous cars, and networked vehicles from 22 to 29 September at the leading trade fair for commercial vehicles. Photo by: Julian Stratenschulte/picture-alliance/dpa/AP Images
Julian Stratenschulte — picture-alliance/dpa/AP

Daimler’s trucks chief Wolfgang Bernhard, once seen as a candidate to succeed CEO Dieter Zetsche, has stepped down a year before his contract was due to run out, the German carmaker said on Friday.

Bernhard’s restructuring efforts have angered powerful labour leaders, who hampered his progress at Daimler until he was too old to be considered for the top job, according to sources familiar with the matter.

Daimler said in a statement Bernhard was leaving at his own request for personal reasons and was released from his duties with immediate effect. It did not say what he would do next, but added CEO Zetsche would take over his duties at Daimler Trucks & Buses.

Daimler’s 20-member supervisory board met on Friday to discuss Bernhard and a possible contract extension, a source had told Reuters earlier, but Bernhard instead asked to leave.

Bernhard began working at Daimler in 1994 and moved through the ranks to become head of Mercedes-Benz Vans, board member for production for Mercedes-Benz Cars and eventually head of trucks.

But last year Daimler extended the contract of CEO Zetsche by three years, a move that effectively ruled out 56-year-old as a successor, as the company would prefer a candidate likely to stay at the helm for many years.

A year ago, Daimler also promoted Ola Kaellenius, a 47-year-old Swede, to head up research and development, a move company insiders say makes him a natural heir to Zetsche.

Bernhard also did a stint as chief operating officer at Chrysler, a U.S. brand Daimler has since sold off, and that experience might make him a contender to succeed Fiat Chrysler boss Sergio Marchionne when he retires in 2019.

“If he is leaving Daimler he must have opportunities elsewhere to become chief executive somewhere else and at Fiat Chrysler a job is freeing up soon,” said MainFirst analyst Daniel Schwarz.

“Fiat needs a strong personality at the top so it could be a good match.”

Separately, members of Volkswagen’s board of directors were meeting on Friday to review progress made by VW brand chief Herbert Diess with his restructuring efforts, sources told Reuters.

Diess, who has been tipped as a future CEO of the Volkswagen group, has also clashed with powerful labour leaders. Earlier this week, Volkswagen labor boss Bernd Osterloh accused Diess of undermining a jointly agreed turnaround plan.

“Neither of them (Bernard nor Diess) have been given the time to harvest the fruits of restructuring. To a large extent that has to do with co-determination,” said Evercore ISI analyst Arndt Ellinghorst, referring to the policy at large German companies of appointing labour representatives to the board of directors, giving them a say in strategy.