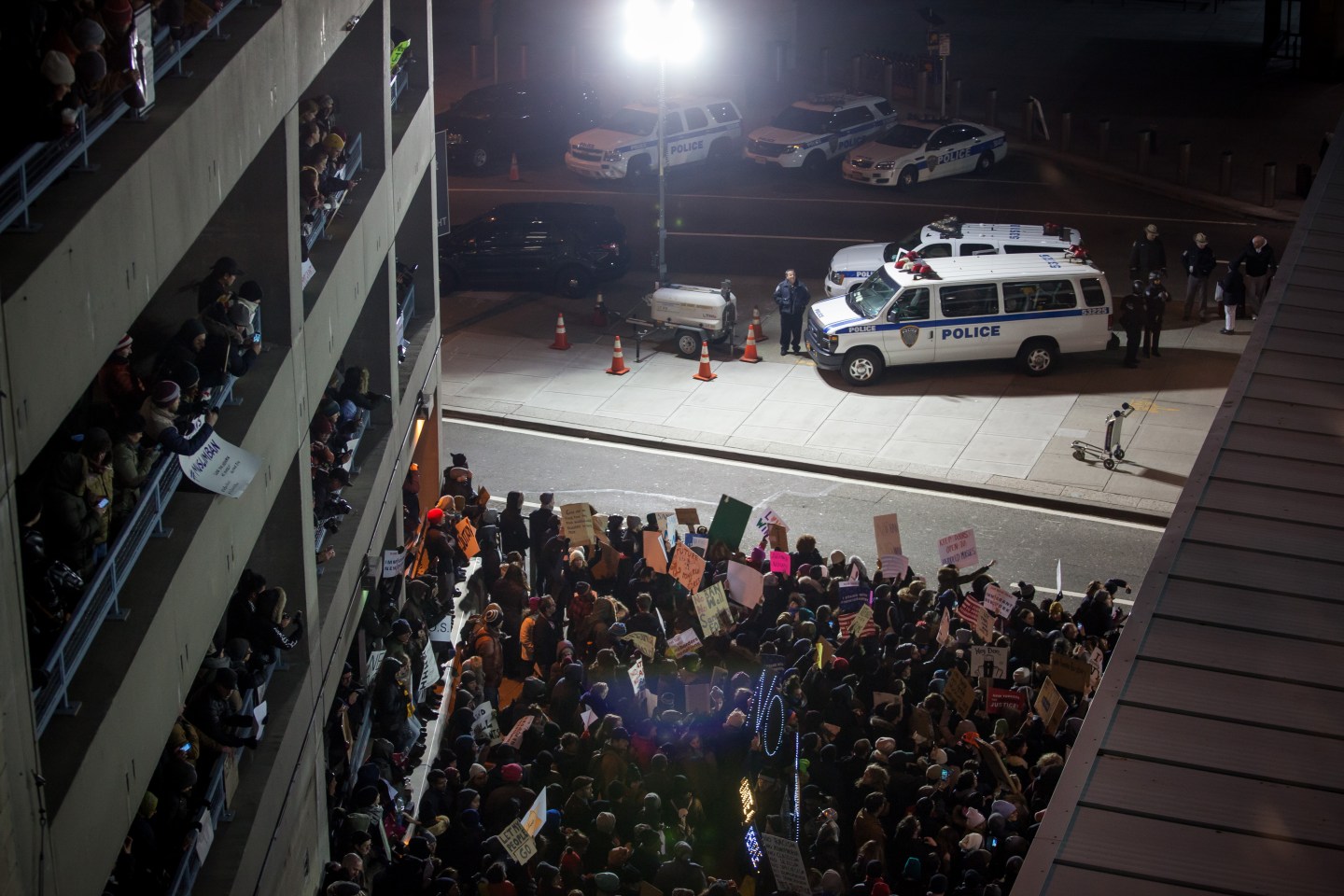 Tens of thousands of people rallied in U.S. cities and at airports on Sunday to voice outrage over President Donald Trump’s executive order restricting entry into the country for travelers from seven Muslim-majority nations.

In New York, Washington and Boston, a second wave of demonstrations followed spontaneous rallies that broke out at U.S. airports on Saturday as U.S. Customs and Border Protection agents began enforcing Trump’s directive. The protests spread westward as the day progressed.

The order, which bars admission of Syrian refugees and suspends travel to the United States from Syria, Iraq, Iran and four other countries on national security grounds, has led to the detention or deportation of hundreds of people arriving at U.S. airports.

Uber Responds to Rage over Alleged ‘Strikebreaking’ During Immigration Protests

One of the largest of Sunday’s protests took place at Battery Park in Lower Manhattan, within sight of the Statue of Liberty in New York Harbor, long a symbol of welcome to U.S. shores.

Democratic Senator Charles Schumer of New York told the crowd that Trump’s order was un-American and ran counter to the country’s core values.

“What we are talking about here is life and death for so many people,” the Senate Democratic leader said. “I will not rest until these horrible orders are repealed.”

The march, estimated to have grown to about 10,000 people, later began heading to the U.S. Customs and Border Protection office in Lower Manhattan.

In Washington, thousands rallied at Lafayette Square across from the White House, chanting: “No hate, no fear, refugees are welcome here.”

It was the second straight weekend that Washington was the scene of protests. Last Saturday, hundreds of thousands of women participated in an anti-Trump rally and march, one of dozens staged across the country.

On Sunday, many of the protesters left the White House area and marched along Pennsylvania Avenue, stopping at the Trump International Hotel where they shouted: “Shame, shame, shame.”

A crowd that police estimated at 8,000 people eventually arrived at the steps of the U.S. Capitol, where a line of uniformed officers stood guard.

For more on the protests, watch:

As the crowd passed the Canadian Embassy en route to the Capitol, protesters chanted: “Hey hey, ho ho, I wish our leader was Trudeau.” It was a reference to Canadian Prime Minister Justin Trudeau’s Saturday Twitter message affirming his country’s welcoming policy toward refugees.

Trump defended the executive order in a statement on Sunday, saying the United States would resume issuing visas to all countries once secure policies were put in place over the next 90 days.

“To be clear, this is not a Muslim ban, as the media is falsely reporting,” Trump said. “This is not about religion – this is about terror and keeping our country safe.”

Aria Grabowski, 30, of Washington, was carrying a sign that read: “Never again means never again for everyone.”

Above the slogan was a photograph of Jewish refugees who fled Germany in 1939 on a ship that was turned away from Havana, Cuba, and forced to return to Europe. More than 250 people aboard the ship were eventually killed by the Nazis.

About 200 protesters chanted on Sunday afternoon at Washington Dulles International Airport in northern Virginia near the U.S. capital.

About the same number gathered at New York’s John F. Kennedy International Airport, where anxious families awaited relatives detained for hours after flights from countries affected by the presidential order.

At Los Angeles International Airport, hundreds of people had gathered to protest Trump’s order, as chants of “refugees are welcome here” echoed through the arrivals hall.

Organizers estimated that more than 10,000 people packed Boston’s Copley Square to hear Senator Elizabeth Warren of Massachusetts, a vocal critic of Trump and a leader of the Democratic Party’s liberal wing, and other speakers.

During the protests, dozens of Muslims, some of them kneeling on protest signs, bowed in prayer on rugs laid out on a grassy patch of ground in the square.

In Houston, which was already filling up with visitors for next Sunday’s Super Bowl, about 500 people marched through the downtown.

Jennifer Fagen, 47, a sociology professor at Lamar University in Beaumont, Texas, said she hoped she did not lose her job for protesting.

“I’m Jewish, and it’s supposed to be ‘never again,'” Fagen said, referring to the Holocaust. “Jews should be the first ones to defend Muslims, considering what has happened to us, and it seems it’s being repeated under Trump.”

At Detroit Metropolitan Airport, police cordoned off sections of terminal as up to 3,000 demonstrators chanted, “No hate, no fear, refugees are welcome here.”

Among the demonstrators were Wail Aljirafi and his wife, Samyeh Zindani of Ann Arbor, Michigan, and their three children.

“We want them to feel that they’re always included,” Zindani, a Yemeni-American, told Reuters.

In the Detroit suburb of Hamtramck, Michigan, home to a large number of Yemeni immigrant families and the nation’s first Muslim-majority city council, at least 600 people rallied outside City Hall.

Rama Alhoussaini, 23, a Syrian immigrant who lives in nearby Dearborn, said she and her family emigrated to Michigan in 1999 when she was six years old.

“Now for us to see this kind of hatred and bigotry, it breaks my heart,” she said. “It makes me feel like I am not wanted here.”