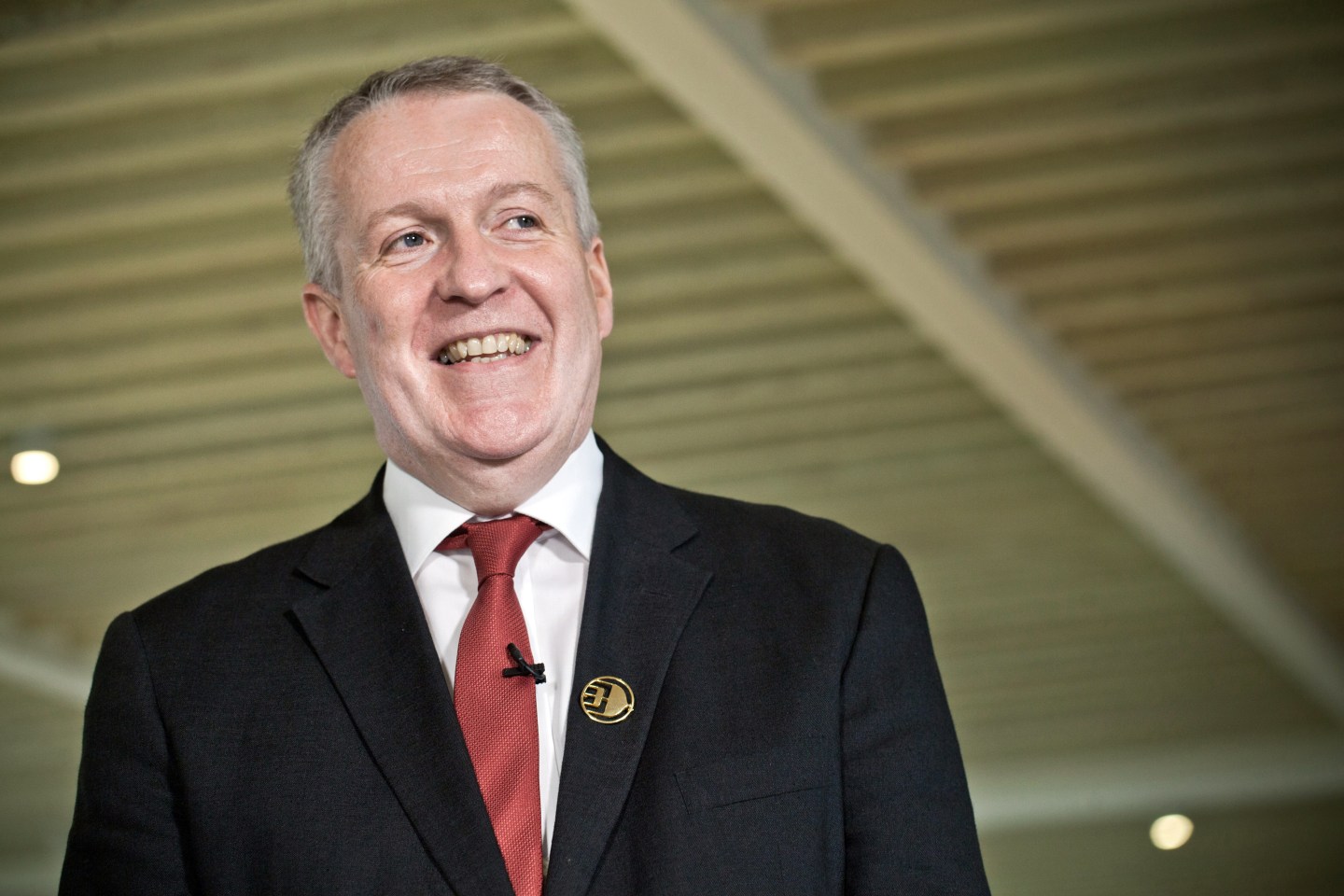 The day had begun just like any other when Peter Bellew got the bad news.

Bellew, who had left what he calls a “straightforward job” at an “easy airline” to be Mueller’s COO, pulls no punches about how much the move annoyed him.

“It reminded me of when I was 18,” he mused. “This girl dumped me. And I sat in the corner of the kitchen and I cried for at least an hour and a half. And then the following day, I realized this girl who’d dumped me had taken my Bob Dylan albums! And I cried again.”

Three months later, Bellew was named Mueller’s successor. He is Malaysia Airlines’ third CEO in two years—a period that few need reminding has seen the aftermath of flights MH370 and MH17; humiliating financial ruin that led to Malaysia’s sovereign wealth fund swooping in to reprivatize the company; and ever more abandonment issues, from the millions of passengers who deserted the airline to the company’s first-ever foreigner boss quitting one year into a three-year deal.

Upon signing on, Bellew called it “the toughest job in aviation.” No one disagreed.

Getting the 10-year RyanAir veteran to come on board at all had taken heavy convincing. The first time a headhunter called Bellew about Malaysia Air, it was less than a year after flight MH370 had gone missing with 239 people onboard; and just six months after MH17, carrying 283 people, was shot down in Ukraine.

“‘For f’s sake, why did you call me? You must be joking,’” Bellew said he responded.

Months later, however, he arrived at the carrier, bringing what he calls his “RyanAir head”—an affinity for cost cutting—and a play on ‘Bob the Builder’s’ catchphrase: “We will fix it.”

Proud day. Just been appointed CEO of Malaysia airlines. We will fix it. Pic with Tan Sri Chairman and outgoing CEO Christoph Mueller.

It wasn’t easy to convince Malaysia Airline’s staff and suppliers that change was coming, Bellew says. For all their strides in the past year, there have been scarring memories along the way.

“Literally, not more than a year ago, we were operating flights with 737s with five and 10 passengers onboard,” Bellew told a packed luncheon room of aviation executives in Hong Kong on Tuesday.

After last year, Bellew is proud to have sunnier news to share. Passenger load factors, which measure an airline’s capacity to fill seats and generate revenue, rose from 68% to 82% in the last quarter. In December, they were 90%, he announced. This January will mark 76%.

“Our flights are so full at the moment that our staff are not able to use their standby tickets,” Bellew said. “The most important thing is, the family of Malaysia Airlines staff and the culture within that—they believe again now.”

At Malaysia Airlines, the frequently evoked cliché of the company “family” is actually true. Many employees are literally related or have had relatives previously work there, according to Bellew.

As the CEO set about tackling the many problems at Malaysia Airlines—from upgrading its fleet to improving the nasi lemak served onboard—he realized the morale of his tight-knit employees would require as much attention as the balance sheet. “What the people at Malaysia Airlines on the operations side actually needed was somebody to put their arm round them, and tell them, ‘Guys, everybody’s going to be OK,’” he said.

Bellew said he left the office to “get down shoulder-to-shoulder with the people.” He went to work shifts with guys in the baggage hall, guys out in the hangars. As he set about fixing the grisly conditions these employees worked in, he quickly learned that most of the real business at Malaysia Airlines was done over teh tarik, milk tea. He even formed a band with eight of his colleagues: PB and the Gang. “We play dad rock. It’s like bad Eagles and the Beatles.”

On the financial side, Bellew describes a far grimmer wake-up call.

“The problems were really, really bad long before the tragic events that happened,” Bellew told Fortune in an interview. In his view, the airline’s “lack of sales and focus,” along with a failed AirAsia share swap agreement in 2012 “destroyed the fabric” of the company.

Nowadays, his utmost priority—unsurprising for a RyanAir alumnus—is tightly controlling costs and generating revenue as quickly as possible.

But that does not necessarily mean more fees for travelers. While other airlines have moved to unbundle their fares, Malaysia Airlines is “doing the reverse,” Bellew said firmly. “We’re not going down that road. In fact, if we can give people more stuff for free, that’s what we’re going to do. And we’ll set ourselves apart from the low-cost carriers.”

Bellew has already clocked a few hard-won battles under his early tenure. At a time when it seemed like no one would quit yammering about rebranding—including his old boss, Mueller—Bellew fought to preserve the company’s logo and its name. And while everyone else was predicting the end of Malaysia Airlines, Bellew was plotting “a big global splash.”

One week into the gig, Bellew called up England’s Liverpool Football Club to arrange a sponsorship.

“It was the first time I think an airline ever did it,” he said of the debut at a Liverpool-Manchester United game, where the company advertised $495 roundtrip fares between Kuala Lumpur and London. “That has changed perception radically for us, in China, in Thailand, in the U.K.”

It’s to this deal that he credits much of Malaysia Airlines’ recent surge on the KL-to-London route, from 45% market share in May to 63% in December. “Old-fashioned sales and marketing works,” he said.

Where the company has faced the most questioning over public perception, of course, is China: the country with the most citizens onboard flight MH370, and the same outbound tourism market Bellew describes as “the global mega-trend, bar none.”

But with the fierce onslaught of competition in China, how exactly does Malaysia Airlines plan to chase share?

“I think that takes time. I think that there are many people in China who will never fly with us,” Bellew said, though he noted that the highest load factor of any of Malaysia Airline’s routes is in China.

The CEO has pledged to rewrite the carrier as “the greatest transformation of an airline in history.” He pegs the turning point at March 2019: its target date of getting relisted in Malaysia.

“It’s our Olympic Games,” declared Bellew. “Everything works back from that.”

It’s an ambitious timeline. Brendan Sobie, a chief analyst specializing in Southeast Asia at the Centre for Aviation (CAPA), said that while Bellew has “done everything basically in his power” to set the company up for growth, it’ll still be a few years before Malaysia Airlines can truly be called a success.

“Everything has to go right,” he said. “There’s a lot of stuff I would say are beyond his power.”

Running a national carrier isn’t without its own set of challenges. Aside from the heightened risk of government intervention, everyone in the country has an opinion about Malaysia Airlines—not least the local taxpayers whose funds are on the line.

Not long after a controversial decision to change the cabin crew’s uniforms, Bellew was walking down the street with his daughter when a durian seller suddenly called out to him.

In fact, most of the people who ask the CEO what’s going on every day are ordinary citizens who’ve never been on a plane, he said. “[When] people ask me, they don’t say, ‘How is Malaysia Airlines?’ They say, ‘How is our airline doing.’”

Bellew, a self-proclaimed “mat salleh,” or “white guy,” treads carefully with the unsolicited advice. “We’ve gotta listen to people,” he told Fortune. One day, “we will be the pride of the nation again.”

It’s a big job to fill—but Bellew already knew that. What he hasn’t discussed much in public is what got him to take on the role.

“Yeah, there’s much easier ways to make a living,” said the father of four.

But with all the airline has been through, said Bellew, “when are you going to get a chance in life to work with a group of people to help them fix this? To make this thing wonderful again? Which means so much to so many people? And that they’ve been through so much?”

As for the burden of reviving Malaysia’s national reputation?

“Well, I’m an old-fashioned Irish Roman Catholic, so I suffer guilt,” Bellew quipped. “If I thought about it too much, getting up in the morning—it would crush me and I would never go to work.”