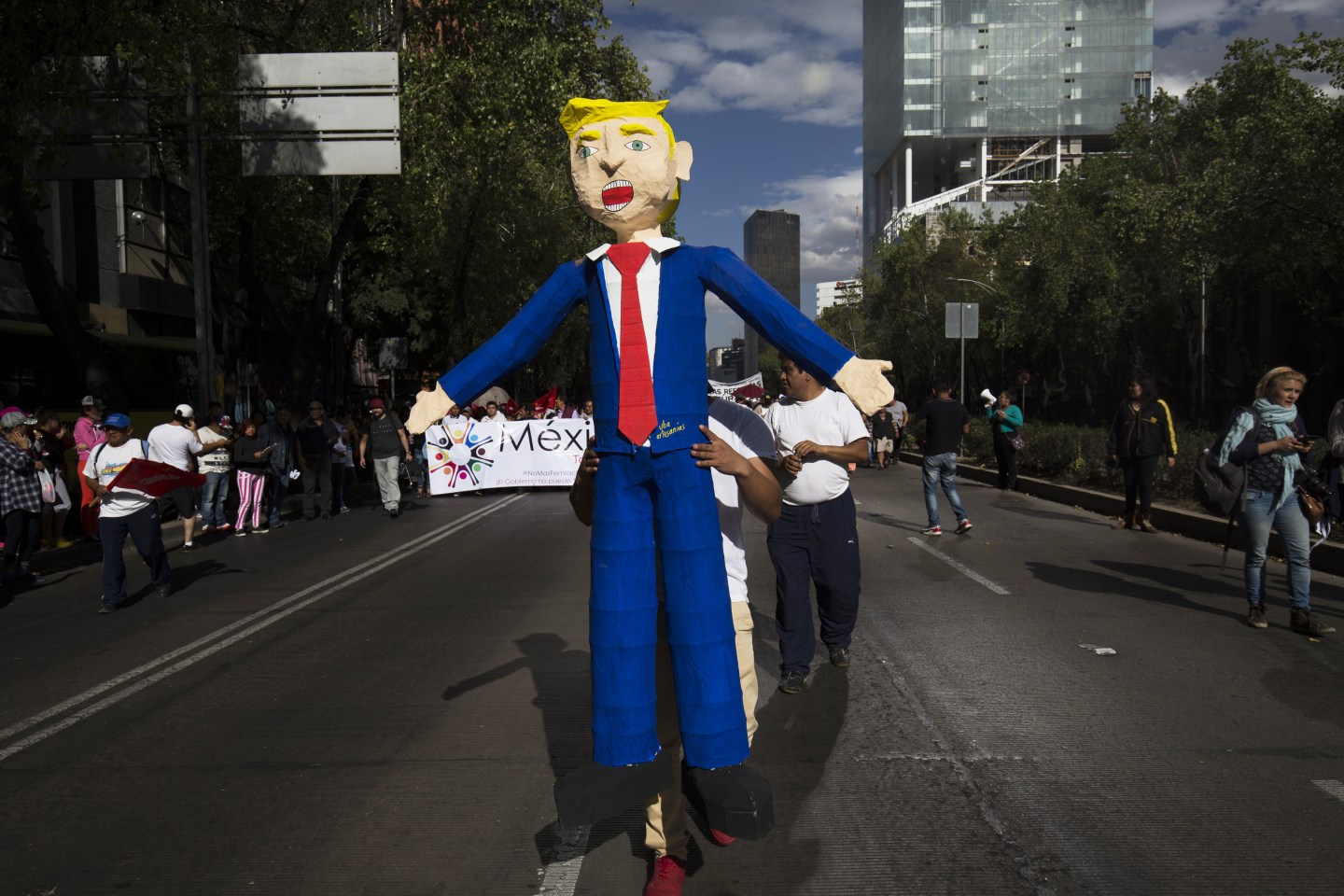 A demonstrator holds an effigy of U.S. President Donald Trump during a protest against Trump in Mexico City, Mexico, on Friday, Jan. 20, 2017. Trump invoked the image of a U.S. plagued by weak borders, lopsided alliances and bad trade deals in an inauguration speech that hammered on his America First view of foreign policy and undermined hopes abroad that the new president would moderate his protectionist tone. Photographer: Yael Martinez/Bloomberg via Getty Images
Yael Martinez/Bloomberg via Getty Images

“We will be starting negotiations having to do with NAFTA,” Trump said at a swearing-in ceremony for his top White House advisers. “We are going to start renegotiating on NAFTA, on immigration and on security at the border.”

Trump pledged during his presidential campaign that if elected he would renegotiate the NAFTA trade pact to provide more favorable terms to the United States.

NAFTA, which took effect in 1994, and other trade deals became lightning rods for voter anger in the U.S. industrial heartland states that swept Trump to power this month.

Canada‘s ambassador to the United States said it was clear the Trump team were concerned above all about trade deficits with Mexico and China.

“I don’t think Canada is the focus at all,” David MacNaughton told reporters in Calgary, Alberta, ahead of a two-day government retreat focused on how to handle the new Trump administration.

Trade experts, academics and government officials say Canada and Mexico will also seek tough concessions and that NAFTA‘s zero-tariff rate would be extremely difficult to alter. Any renegotiation would likely take several years, they say.

Trump said he would be meeting with Canadian Prime Minister Justin Trudeau and Mexican President Enrique Pena Nieto to begin work on overhauling the deal.

He praised Pena Nieto, who has faced low popularity in Mexico due to corruption scandals and rising inflation.

“The president has been really amazing,” Trump said. “I think we are going to have a very good result for Mexico, and the United States, and everybody involved.”

Trump has said little about what improvements he wants, apart from halting the migration of U.S. factories and jobs to Mexico.

Since winning the Nov. 8 election, Trump has singled out and threatened to impose tariffs on U.S. companies that move any production to Mexico.

He also intends to build a wall along the U.S. southern border to deter illegal immigration and insisted that Mexico will pay for it.