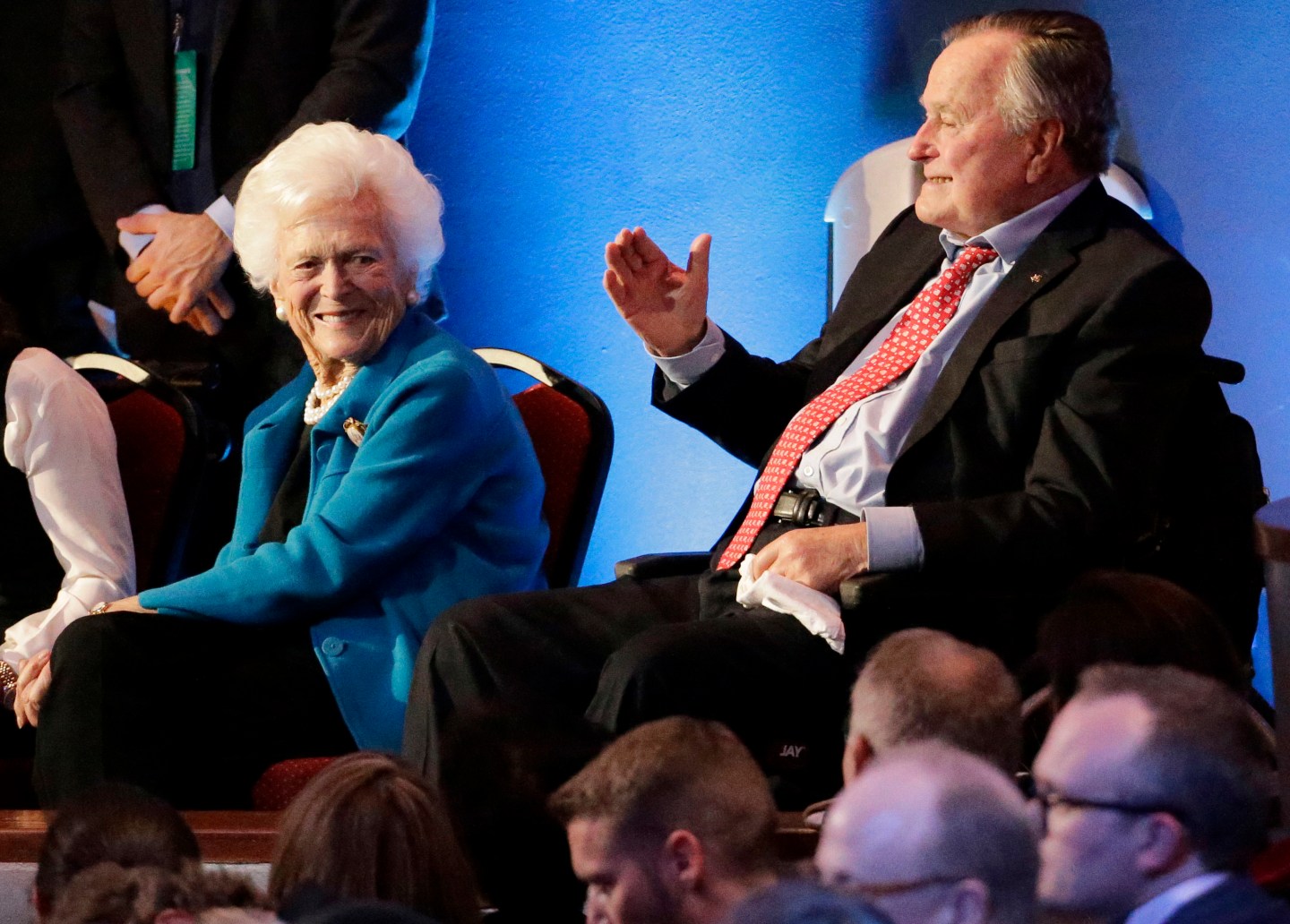 FILE - In this Thursday, Feb. 25, 2016 file photo, former President George H. W. Bush, right, and his wife, Barbara, are greeted before a Republican presidential primary debate at The University of Houston in Houston. On Wednesday, Jan. 18, 2017, the former president was admitted to an intensive care unit, and Barbara was hospitalized as a precaution, according to his spokesman. (AP Photo/David J. Phillip)
David J. Phillip ASSOCIATED PRESS

Doctors removed former President George H.W. Bush’s breathing tube on Friday and he was breathing well on his own at a Houston hospital, his spokesman said.

The tube was inserted Wednesday while the 92-year-old former president was being treated for pneumonia. Bush remains in intensive care at Houston Methodist Hospital but is comfortable, family spokesman Jim McGrath said.

“He was extubated this morning, and is breathing well on his own with minimal supplemental oxygen,” McGrath said. “President Bush is comfortable and watching inauguration coverage together with Mrs. Bush, their son Neil and daughter-in-law Maria.”

Is It Time to Reassess George H.W. Bush’s Presidency?

Former first lady Barbara Bush also remained hospitalized Friday for treatment of bronchitis, but she’s feeling better and “focusing on spending time with her husband,” McGrath said. The 91-year-old is expected to remain in the hospital over the weekend as a precaution.

Their son, former President George W. Bush, offered thanks on Instagram on Thursday for all the messages “of love and support for Mother and Dad.”

Your prayers are working: 41 and Mom are doing much better today and fighting on. Thanks for your messages of love and support for Mother and Dad. @Laurawbush and I look forward to representing them at the Inauguration tomorrow while they continue to recover in Houston.

“Your prayers are working: 41 and Mom are doing much better today and fighting on,” he said in his first public comments about their illnesses.

For more on the inauguration, watch:

The younger Bush and his wife, former first lady Laura Bush, were at President Donald Trump’s inauguration on Friday.

41 and Barbara—thinking about you both and sending wishes for a speedy recovery. Love, 42.

Looking forward to a speedy recovery for George and Barbara Bush, both hospitalized. Thank you for your wonderful letter!

The Bushes were married Jan. 6, 1945, and their 72-year marriage is the longest of any presidential couple in American history.