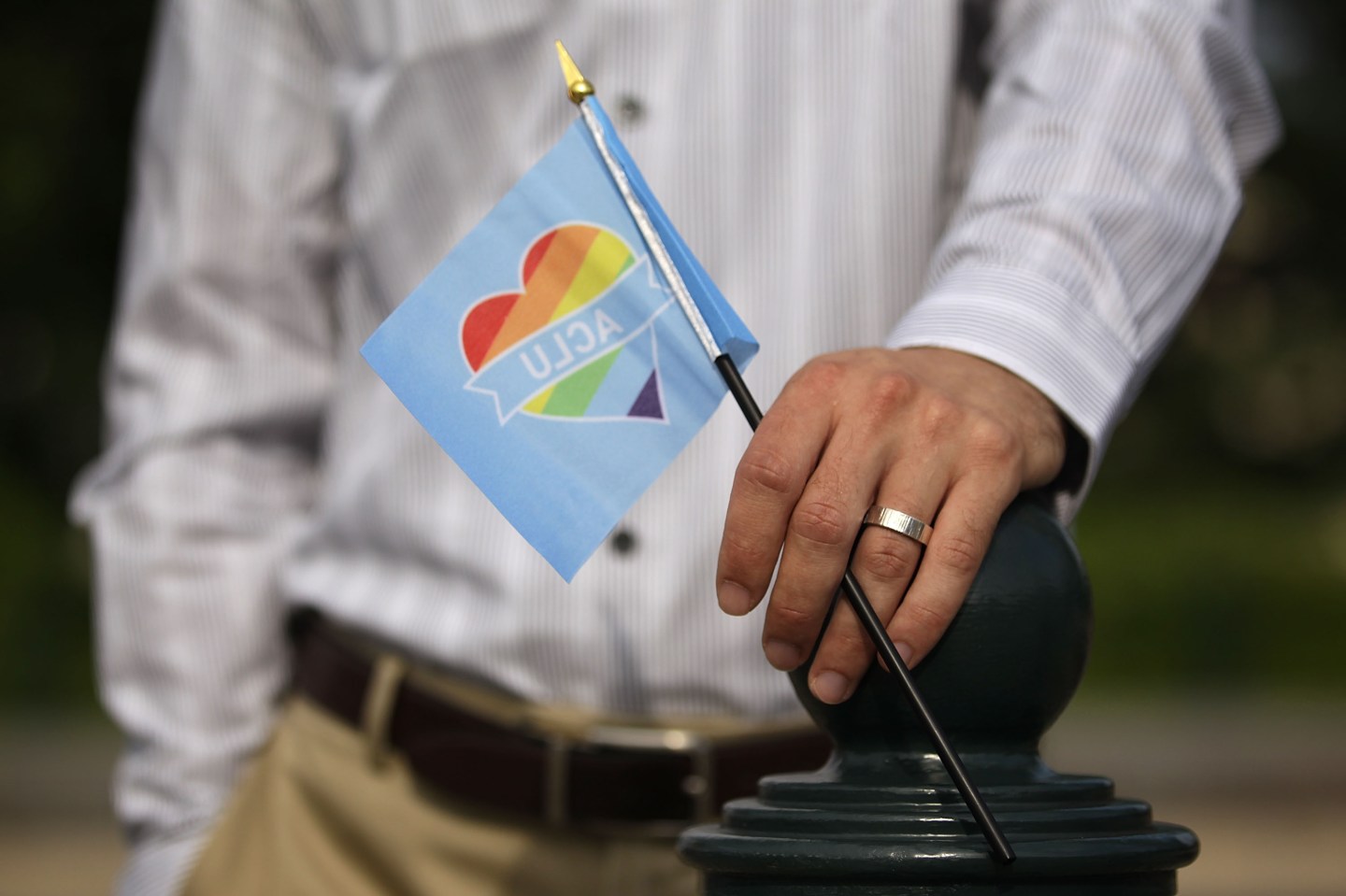 WASHINGTON, DC - JUNE 26: A man holds a rainbow flag in support of same-sex marriage outside the U.S. Supreme Court June 26, 2015 in Washington, DC. The high court ruled that same-sex couples have the right to marry in all 50 states. (Photo by Alex Wong/Getty Images)
Photograph by Alex Wong — Getty Images

Reversing its previous ruling, the state’s highest civil court set arguments for March in a lawsuit seeking to halt same-sex spousal benefits that America’s fourth-largest city offers its municipal employees. The nine Republican justices had ruled in September not to hear the case in the wake of the U.S. Supreme Court’s ruling from the previous summer that gay marriage was constitutional nationwide.

But Gov. Greg Abbott, Lt. Gov. Dan Patrick and state Attorney General Ken Paxton filed a subsequent brief saying that the case could serve as a platform to help Texas restrict the scope of the high court decision.

“Major constitutional rulings by the United States Supreme Court routinely give rise to waves of litigation exploring the contours and limits of the court’s pronouncement,” the three Republicans wrote in an October brief. “This case is one of many cases that will require state courts to examine the scope of the right to same-sex marriage announced by the Supreme Court.”

It noted that the Texas Constitution had banned gay marriage after a 2005 amendment approved by the Legislature and voters statewide, further arguing, “Principles of comity, federalism, and the rule of law should make state courts particularly wary of using the federal constitution to expand upon newly created substantive due process rights that have the effect of undoing the work of state lawmakers.”

The reversal Friday followed a slew of separate briefs signed by dozens of other state elected officials, conservative activists and religious leaders who asked the state Supreme Court to defend religious liberty and take a stand on social issues. They argued that Texas should challenge not only the U.S. Supreme Court’s legalization of gay marriage but also its striking down this past July of many of the state’s tough abortion restrictions.

“This court has the opportunity to diminish federal tyranny and re-establish Texas sovereignty,” the conservatives argued.

Attorneys for Houston say the case had nothing to do with religious liberty or abortion and is a matter of settled federal statute.

For more on gay Americans and politics, watch:

Texas isn’t the first conservative state to attempt to defy the U.S. Supreme Court on gay marriage, but past attempts haven’t succeeded.

In March, Alabama’s Supreme Court dismissed a challenge seeking to bar gay marriage there. While Indiana governor, Vice President Mike Pence signed a law potentially allowing businesses to reject gay customers because of religious objections — though Pence said in 2015 that his state would respect the high court’s gay marriage ruling.

In July, a federal judge cited the 2015 decision in declaring unconstitutional Mississippi’s “religious objections” law, which had defined marriage as only between a man and a woman. And North Dakota’s Legislature recently rejected changing state law to reflect the U.S. Supreme Court ruling — even though a federal judge had already declared that state’s previous gay marriage ban unconstitutional, pointing to previous high court precedent.