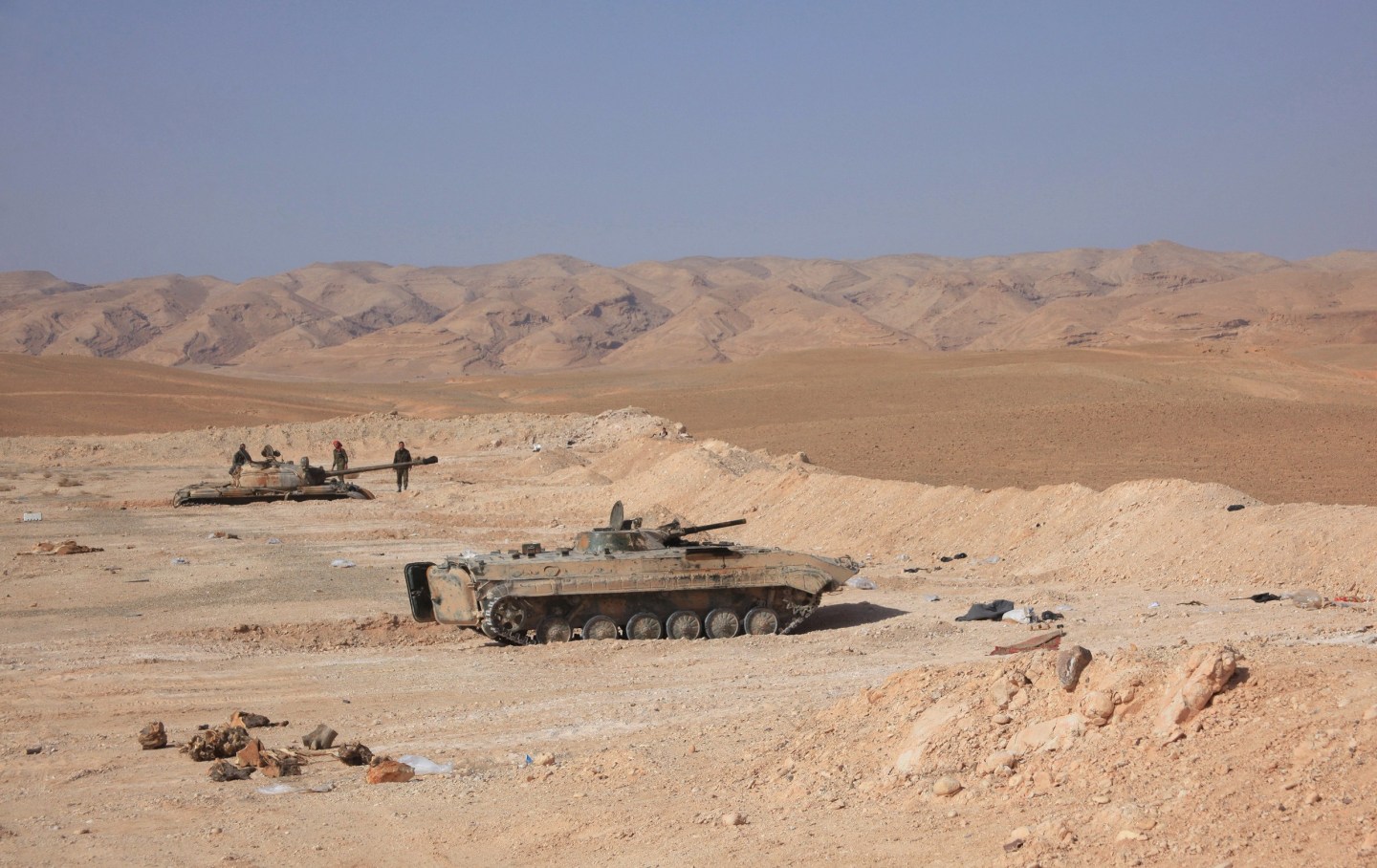 Tanks belonging to Syrian government forces are positioned near the Jazel oil field, near the ancient city of Palmyra in the east of Homs province after they retook the area from Islamic State (IS) group fighters on March 9, 2015. Recent US-led coalition air strikes have frequently targeted oil facilities run by the IS group jihadists, who according to some estimates earn more than $1 million per day from oil sales. AFP PHOTO/ STR (Photo credit should read STR/AFP/Getty Images)
STR/AFP/Getty Images

Revenues from oil and gas sold to the regime of Syrian President Bashar al-Assad are now the largest source of funds for the Islamic State (ISIS), as the militant group faces mounting military pressure in both Iraq and Syria.

The Wall Street Journal reports that officials from the U.S. and Europe said the Assad regime, despite pronouncements that it is fighting the extremist group, is directly supporting ISIS through the purchase of energy, needed to power the Syrian capital Damascus and other parts of the country.

Amos Hochstein of the U.S. State Department told the Journal that the group’s “revenue and energy generation is being supported by the Syrian regime.” Syria’s state-owned energy company and oil ministry have previously denied purchasing gas and oil from ISIS and did not respond to the new allegations, the Journal reports.

Officials said ISIS is seeking new sources of revenue as its territory shrinks; the group used to collect transit tolls and wage taxes in areas within its control. Sales to the Assad regime were reportedly detected by monitoring oil transport routes. Trucks once routed to Turkey and Iraq are now reportedly headed into Assad’s territory from ISIS’s stronghold near Palmyra.

The group took control of a number of oil fields and natural gas facilities in 2014, and made up to $1 million a day selling the fuel to the Syrian regime and other regional buyers. ISIS also operates the Al-Akram gas facility between Palmyra and Raqqa, which Hochstein told the Journal “should be considered for termination” by incoming U.S. President, Donald Trump.

Trump, whose inauguration is on Friday, has said that his administration will prioritize eradicating ISIS over ousting the Assad regime, and has indicated his openness to working with Assad and Russian President Vladimir Putin toward those ends.

According to the Journal, Russia and Iran have in recent weeks reduced deliveries of cheap gas and oil to the Syrian government, putting additional strain on a country already in ruins from six years of war.

ISIS, under pressure from coalition airstrikes and the isolation of its remaining holdout in the Iraqi city of Mosul, needs the revenues as much as Syria needs the energy. Further complicating matters is Assad’s reported failure to pay ISIS on time, which officials believe may have been the reason for the Jan. 8 bombing of a Syrian gas plant.