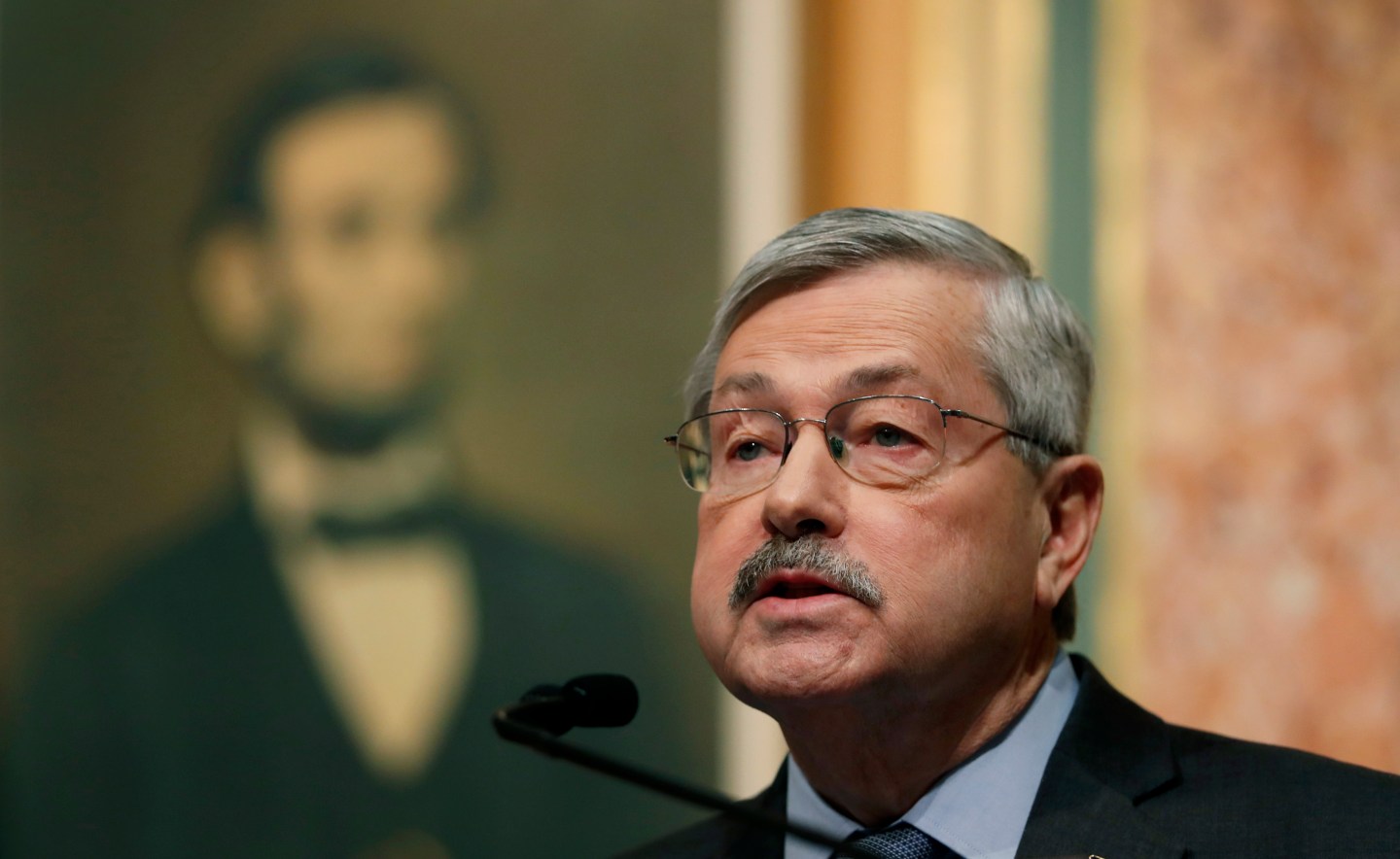 FILE - In a Tuesday, Jan. 10, 2017 file photo, republican Iowa Gov. Terry Branstad delivers his annual condition of the state address before a joint session of the Iowa Legislature, at the Statehouse in Des Moines, Iowa. According to budget projections reviewed by The Associated Press, Branstad has recommended taking $2.8 million previously given to child and family services so it can be redirected to create a roughly $3.3 million program that distributes family planning money to organizations that do not perform abortions. (AP Photo/Charlie Neibergall, File)
Charlie Neibergall AP

Iowa’s governor has proposed cutting funding for needy kids as part of his plan to defund Planned Parenthood, a rare step even as Republican-dominated states grapple with whether to sacrifice federal dollars in order to lessen the organization’s influence.

According to budget projections reviewed by The Associated Press, Gov. Terry Branstad has recommended taking $2.8 million previously given to child and family services so it can be redirected to create a roughly $3.3 million program that distributes family planning money to organizations that do not perform abortions.

None of Iowa’s family planning money is used to fund abortions, and the state’s funding for Planned Parenthood goes to other women’s health services such as birth control counseling and health exams.

Iowa receives more than $3 million in federal Medicaid funding that it must spend on family planning services, and some of that is tied to Planned Parenthood.

Branstad, who is expected to resign soon from his Iowa job to become President-elect Donald Trump’s ambassador to China, told legislators in an address last week that he supports removing state funding for Planned Parenthood to redirect it to other groups. His office later confirmed to the AP that the governor backed the creation of a state-run program that would pass up millions of federal Medicaid dollars for family planning services.

Branstad’s office said it would pay for the state-run program by tapping into the Social Services Block Grant, a separate pot of federal money that provides aid to vulnerable children, adults and families.

Ben Hammes, a spokesman for Branstad, originally insisted that services provided by this roughly $15 million fund would not be affected. He backtracked after reviewing documents provided by AP.

Amy McCoy, spokeswoman for the Iowa Department of Human Services, said core services such as foster care wouldn’t be affected by Branstad’s proposed cut, which would take effect for the budget year beginning in July. But she confirmed the governor’s plan would mean less funding for preventative programs that reduce the chance of children entering welfare and the juvenile justice system.

In the end Branstad’s overall budget for child and family services for the next budget year — which will be about $127 million — will be $2 million less than what’s estimated for this current budget. The governor has also asked state agencies to cut about $110 million from the current $7.2 billion to plug a shortfall of available cash.

For more on healthcare, watch:

Rachel Lopez, a spokeswoman for Planned Parenthood of the Heartland, the Iowa affiliate of the national organization, criticized Republicans — including Branstad and Lt. Gov. Kim Reynolds, who will succeed him.

“As parents and public servants entrusted to care for the health and well-being of all Iowans, it’s appalling that they will sacrifice the most defenseless Iowans on the taxpayers’ dime — all for the sake of politics,” she said in a statement.

Lynette Jacoby, who leads social services in Johnson County — one of the state’s largest counties — called the potential loss of preventative funding a blow for at-risk kids in Iowa but also a “setback for many of these families that are benefiting from these programs.”

At a speech earlier this month, Iowa Supreme Court Chief Justice Mark Cady noted such services help children turn their lives around and save the state millions of dollars in the process because it avoids court costs.

Child Care Is Unaffordable in Every U.S. State Except This One

A handful of states have considered dropping Medicaid money altogether to try to defund Planned Parenthood, a move that leaves statehouses on the hook for finding new money to pay for family planning services that used to be covered. Texas stopped receiving Medicaid money for family planning services several years ago, while Missouri considered it last year.

Democrats have held at least partial control of Iowa government for nearly 20 years, keeping previous defunding attempts at bay. But after the November election, Republicans now control both chambers of the Legislature and the governor’s office.