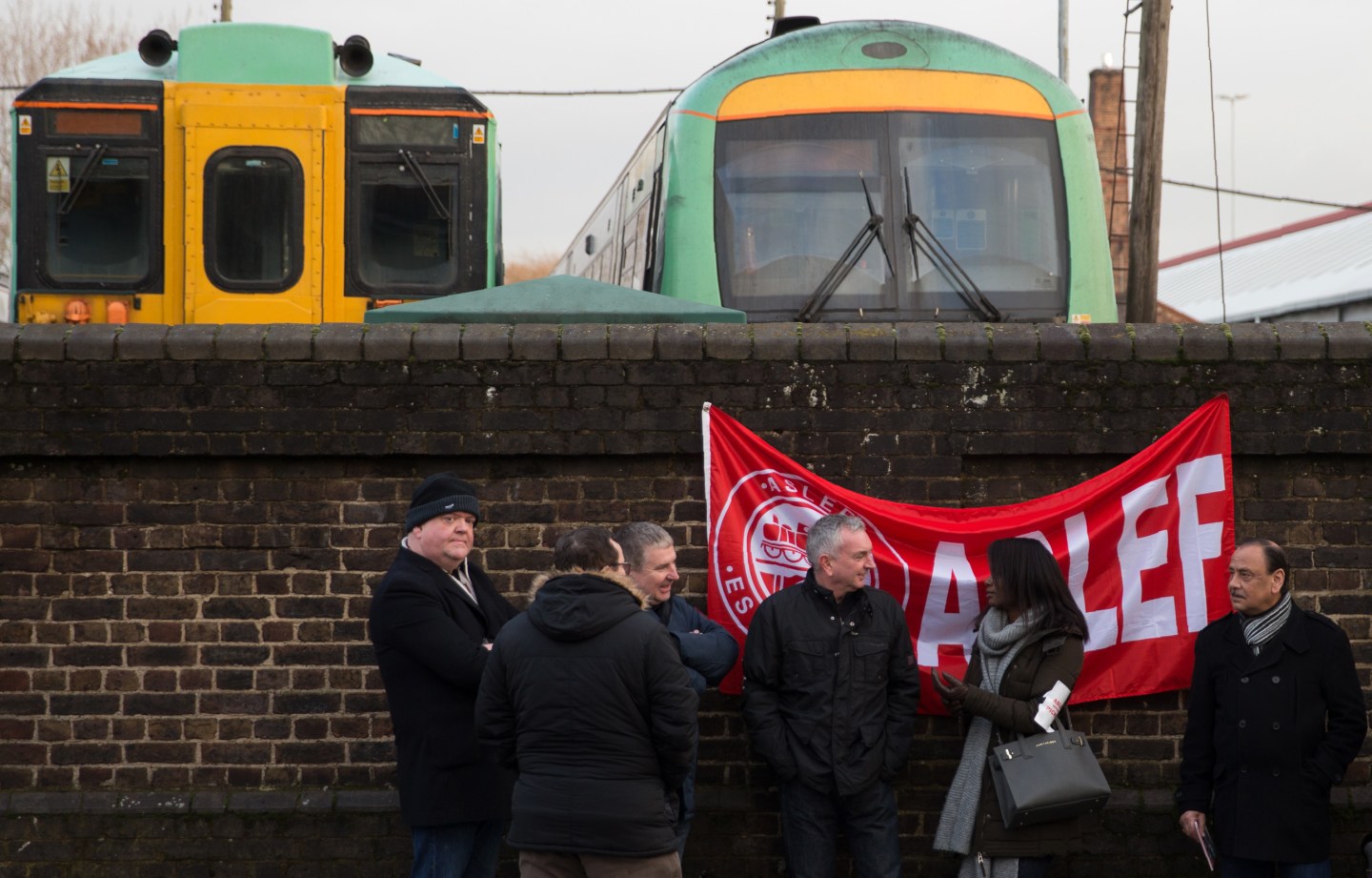 Southern Rail trains stand at Selhurst station south of London, on January 10, 2017, during strike action by Southern Rail. Commuters heading into and out of London were hit by another strike on Southern rail, which caused virtually all services between the southern English coast and the capital to be cancelled. The strike, which has the backing of opposition Labour leader Jeremy Corbyn, will continue into Wednesday and resume on Friday, while further action is also planned for three days later in the month. / AFP / Daniel LEAL-OLIVAS (Photo credit should read DANIEL LEAL-OLIVAS/AFP/Getty Images)
DANIEL LEAL-OLIVAS AFP/Getty Images

Rona Jeff loved her job as a PR consultant for an education charity in central London. But last month she quit. Her train commute had become so unbearable it was ruining her health.

“It became untenable to try to go to work,” said Jeff, whose journey into London from Brighton on England’s south coast should have taken just over an hour, but was regularly taking 4 1/2 hours because of cancellations, slow-downs and strikes.

She rarely saw her husband, gave up a photography class, repeatedly cancelled plans with friends, missed a theatre performance after saving up for tickets. Finally, the stress was wrecking her sleep: “It got to the point where I was ill.”

Southern Rail, one of more than a dozen privatised railways that bring commuters into London, has seen 25 days of strikes over 10 months. Even when staff are not officially striking, workers have been calling in sick en masse and refusing overtime, causing trains to be cancelled and timetables cut. When trains do run, nearly 40% are late.

France Is Buying Faster Trains for Slow Tracks to Save Jobs

For a labour dispute on a railway with just 4,000 employees, the costs have been colossal. Hundreds of thousands of people are regularly affected. A university study last month estimated the dispute had so far cost the economy 300 million pounds.

Officially, the argument is over a seemingly small issue: who should open and close train doors. That task now sometimes falls to conductors who ride in train carriages; Southern says train drivers can do it themselves.

The unions say that would be dangerous. Management says it is the practice on other lines and deemed safe by regulators. It would mean trains could sometimes run without a guard on board, although the company says it has no plans to reduce staff and will keep “supervisors” on trains to help passengers.

Despite the narrow issue, both sides accuse their opponents of having far bigger aims, turning it into the most consequential industrial action in Britain for decades.

Members of the ruling Conservative party say militant unions are deliberately fomenting commuter chaos for political reasons. Unions and the opposition Labour Party say the government is prolonging the feud to break the back of the labour movement.

And it could get worse. Unions are threatening more strikes against other railways. Conservative politicians are calling for changes to laws to make such strikes more difficult, or even ban them, a step which would be seen as a broad attack on labour.

Already the worst industrial dispute on Britain’s railways since privatization, it lends Prime Minister Theresa May’s new tenure an echo of the era of her hero Margaret Thatcher, who transformed and polarised Britain by crushing its coal miners.

Since Thatcher left office in 1990, Britain has experienced nearly three decades of labour peace, with only a fraction of the thousands of days per year lost to strikes that were typical from the 1950s through the 1980s.

The left bemoans the loss of union power. The right considers it a triumph, now under threat from union militants.

“Not for a generation has Britain faced industrial militancy intended to bring down an elected government,” wrote London’s right-leaning Times newspaper in an editorial. “It does so again now, not in the mining industry, as Margaret Thatcher’s administration faced in the 1980s, but in the transport sector.”

Under Britain’s complex 1990s rail privatization, tracks and train cars are still state-owned, but trains are run by private firms which in most cases keep the revenue from the tickets they sell, giving them an incentive to avert disruptive disputes.

But Southern, run by Govia Thameslink Railway (GTR)—a joint venture owned by London-listed Go-Ahead and France’s Keoli—works differently: the state collects ticket revenue and pays the firm to run the trains. That means when service is disrupted, the taxpayer loses money, not the company.

“Govia have no incentive to settle because they are not being hit financially,” said Roger Seifert, a professor of industrial relations at Wolverhampton Business School. “That is just a mess. If you go anywhere in the world you couldn’t find a worse system of running a railway, it’s laughable.”

So far, the government has refused to talk to the unions unless they first call off the strikes. Transport Secretary Chris Grayling echoes management’s position that the unions are striking for no good reason.

“Nobody is losing their job, nobody is losing any money,” he said of the plan to let drivers operate the doors. “It is perfectly safe as judged by the independent rail inspectorate. There is no reason for this strike to be happening.”

Union supporters say the government has not only refused to help end the dispute, it has egged it on, saddling taxpayers with the cost and passengers with the misery. They point to a senior Department for Transport official who, before the strikes began last year, said “we have got to break” the unions.

Workers “will have to decide if they want to give a good service or get the hell out of my industry,” the official, Peter Wilkinson, was quoted as saying in the Croydon Advertiser, a local newspaper in a suburb served by Southern.

If the government is hoping to win public backing for a hard line, it does not seem to be working. Research suggests that while passengers are angry at both sides, they blame the company more than the unions, said Professor Seifert.

This is Uber’s Next Move to Fix Transportation in Cities

Even some Conservative members of parliament now say the government should step in to resolve the dispute, or strip Southern of its franchise. Opposition Labour leader Jeremy Corbyn has offered to picket alongside striking workers.

Southern and the unions show no sign of settling. The company says it will take ASLEF, the union representing its drivers, to the Supreme Court to try to halt further strikes this month. “We’re not going to give in,” Chief Operating Officer Nick Brown told BBC radio.

ASLEF General Secretary Mike Whelan called the company “bullies” and also vowed not to concede. The RMT, a separate union which represents the guards, has threatened to hit other train companies, giving operators of two franchises in northern England until Jan. 26 to provide assurances over guard posts.

“A wave of further rail strikes like the one in the south east would hit investment, job creation and confidence, and undermine the livelihoods of millions of people.”

For passengers like Jeff, who since quitting her London job now works freelance at a job she can reach in an hour by car, there are no good guys.

“They are like children in the playground,” she said. “I just would really like them to grow up and get round the table and sort this out.”