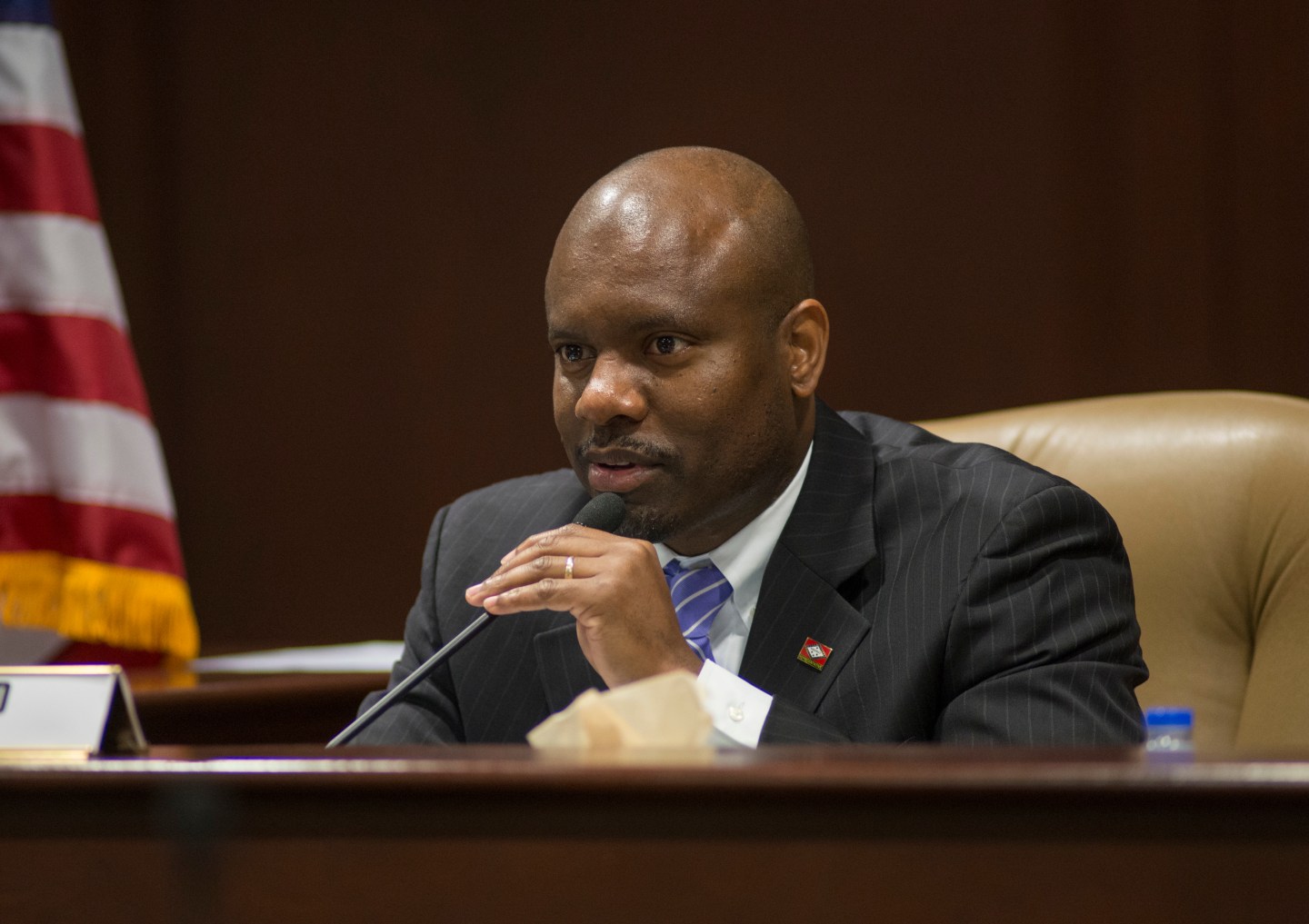 In this Wednesday, Jan. 11, 2017, photo, Arkansas state Rep. Fred Love, D-Little Rock, listens during a legislative committee meeting in Little Rock, Ark. Arkansas state offices are closed Monday, Jan. 16 in observance of the the shared birthdays of slain civil rights leader Martin Luther King Jr. and Confederate Gen. Robert E. Lee. Arkansas Republican Gov. Asa Hutchinson is reviving an effort to remove Lee from the holiday. But he faces resistance from opponents who complain the move belittles the state’s Confederate heritage and from black lawmakers worried about a plan to set aside another day to honor Lee. Love said he’s unlikely to support Hutchinson’s proposal if it includes a day for Lee. (AP Photo/Brian Chilson)
Brian Chilson AP

Only three states commemorate both men on the same day, a practice that critics say hurts Arkansas’ reputation. Now the Republican governor is reviving an effort to remove Lee from the holiday, but he faces resistance from opponents who complain the move belittles the state’s Confederate heritage and from black lawmakers worried about a plan to set aside another day to honor Lee.

“I think this provides our state an opportunity to bridge divides,” said Gov. Asa Hutchinson, who has vowed since early last year to make the change, which is part of his agenda for the legislative session that began last week.

Alabama and Mississippi also honor the men on the same day.

Hutchinson’s idea is not new. Two years ago, a similar proposal repeatedly failed before a House committee.

The renewed debate comes amid a nationwide re-evaluation of monuments and symbols linked to the Civil War, the Confederacy and slavery.

After the 2015 fatal shooting of nine black church members by a white gunman who had posed with the Confederate flag in photos, South Carolina Gov. Nikki Haley called for the flag’s removal from the Statehouse. In Alabama, Gov. Robert Bentley took down four Confederate flags on the Capitol grounds.

Arkansas Democrats last year announced they would remove Thomas Jefferson and Andrew Jackson’s names from the party’s annual fundraising dinner, joining a growing number of states distancing themselves from the slave-owning presidents.

For more on MLK, watch:

As with the flag debate in other states, the King Day proposal has drawn the ire of groups that say removing Lee from the holiday is an affront to people whose ancestors served the Confederacy. In 2015, opponents regularly filled a House committee room to speak out against the idea.

The idea also raised complaints from lawmakers who question why any change is needed.

“We’re looking for a solution to a problem we don’t have,” Republican Rep. Josh Miller said. “I haven’t noticed any humongous Robert E. Lee parades that are taking place in conjunction with Martin Luther King Day.”

Supporters of ending the dual holiday include the city of Little Rock and Pulaski County, which passed resolutions last year endorsing the move. Proponents previously argued that the current holiday hurts the state’s efforts to attract businesses, an argument Hutchinson has not adopted. The 2015 bill was fueled in part by photos widely circulated on social media of a sign noting the shared King and Lee holiday.

“I think if Robert E. Lee were here today, he would say, ‘Move my birthday and Dr. King deserves recognition,'” Hutchinson said.

The governor faces resistance from past supporters by simultaneously calling for a day in October to remember Lee, although it would not be an official state holiday. Democratic Rep. Fred Love, who sponsored one of the two previous bills, said he’s unlikely to support Hutchinson’s proposal if it includes a day for Lee.

The former chairwoman of the Legislative Black Caucus said a Lee Day would also give her pause. She suggested Hutchinson pursue that in a bill separate from the proposal giving King the holiday to himself.

“I don’t think my constituents would understand having a day that celebrates the head of the Confederate army that enslaved black folks,” Democratic Sen. Linda Chesterfield said. “But I think they truly will understand that it’s important for Dr. King’s day to be a stand-alone day.”