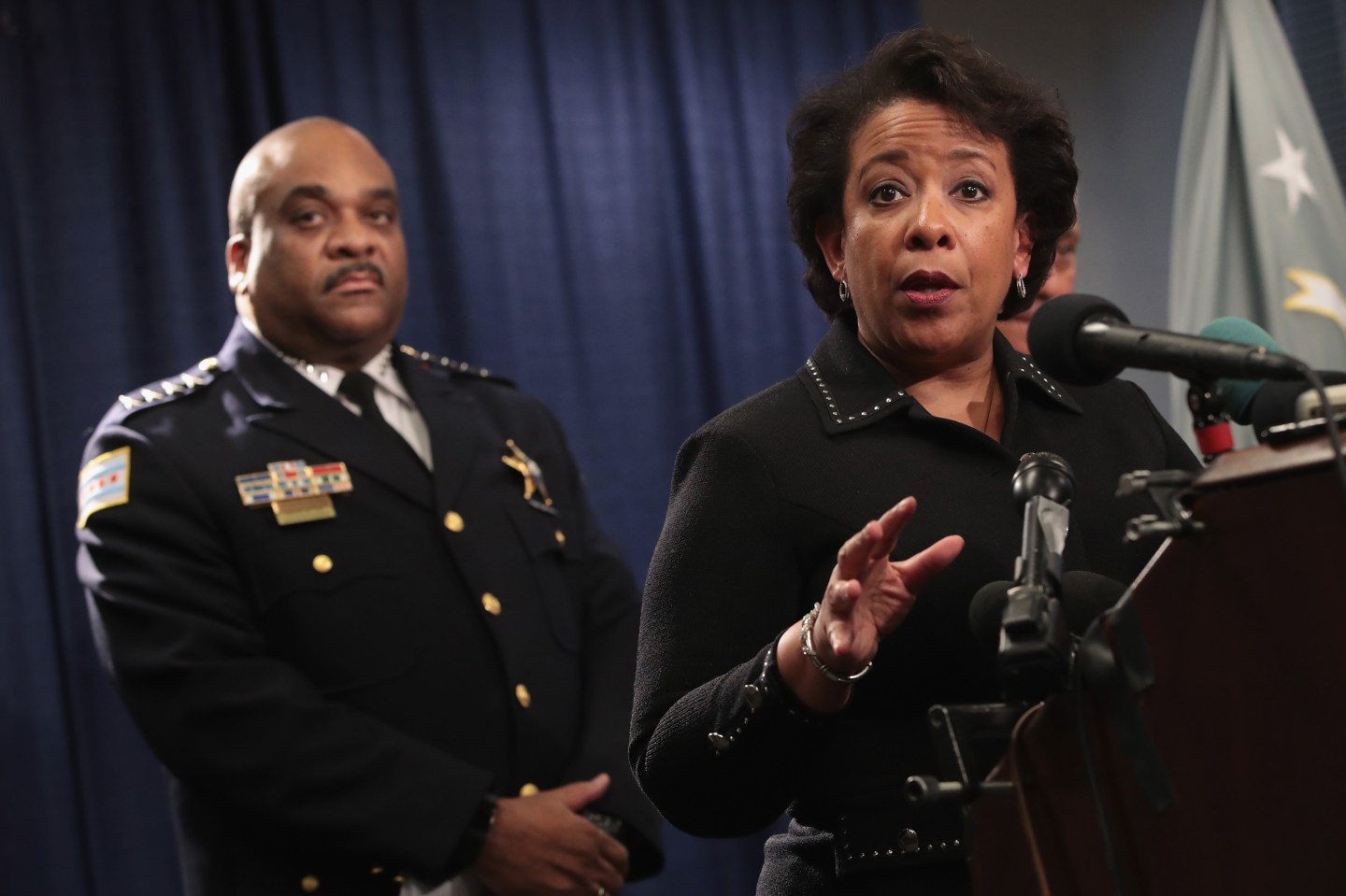 As a younger lawyer, Loretta Lynch prosecuted New York police officers who sodomized a Haitian immigrant in a precinct bathroom. As attorney general, she’s broadened her focus to go after entire police departments for unconstitutional practices.

In an interview as her tenure ends, Lynch strongly defended the Justice Department’s aggressive intervention in local law enforcement during the Obama administration, including the decision to repeatedly seek court-enforceable improvement plans with troubled police agencies. One such consent decree came Thursday in Baltimore, and the Justice Department a day later issued a scathing report on the Chicago Police Department.

“That is a role that the federal government has absolutely to play,” Lynch told The Associated Press. “Frankly, it is our role to defend the constitutional rights of the citizens of our cities in this great country.”

That approach seems likely to change in the next administration.

A Legal System With Justice for Some

Sen. Jeff Sessions, an Alabama Republican and President-elect Donald Trump’s choice for attorney general, expressed concern at his confirmation hearing this past week that consent decrees lower a police department’s morale and unfairly malign all officers for the actions of some.

Sessions would not commit that “there would never be any changes” in the agreements, which are overseen by a judge and require police departments to overhaul their practices.

Lynch leaves office following a nearly two-year tenure marked by massacres carried out by violent extremists, including the shootings at a nightclub in Orlando, Florida; persistent hacking from overseas, including Russian government efforts to meddle in the U.S. presidential election; and an election-season investigation into Hillary Clinton’s email server that entangled the Justice Department in presidential politics and led to criticism for her ill-timed meeting on an airport tarmac with former President Bill Clinton.

She was sworn in as attorney general in April 2015 amid riots in Baltimore over the death of a black man in police custody. She visited Baltimore the following month, and later launched a tour of 12 cities to repair police-community relations, a cause she championed as attorney general.

In the interview, she said she believed that relationships between the Justice Department and local law enforcement were less adversarial than they once were, and that her agency has given police departments federal support and resources while also forcing troubled ones to make systemic changes.

Lynch said her biggest disappointment is that Congress failed to pass legislation to overhaul how criminals are sentenced despite seeming bipartisan support for it.

“It would have helped people rebuild their lives, it would have unclogged the criminal justice system and allowed us to devote our resources to those people who truly deserve long terms of incarceration,” Lynch said.

Lynch won praise from civil liberties advocates for suing North Carolina over a bill the Justice Department said discriminated against transgender individuals, and for an emotional speech linking the prejudice there to bias against blacks in the Jim Crow era.

She attracted global attention early in her tenure for the corruption prosecution of high-level officials at FIFA, international soccer’s governing body. That criminal case jolted the world’s most popular sport and burst into view with early morning arrests at a hotel in Europe.

“When you have an organization that has so much power, so many resources — yes, they have to run a sport, but they also have a responsibility to that sport. And to have them just abdicate that responsibility for personal gain to me was, and is, particularly galling,” Lynch said.

Her tenure is also shadowed by the Hillary Clinton email investigation. She has expressed regret that an unscheduled meeting in Phoenix with Bill Clinton caused the public to doubt the independence of the investigation.

For more on race and leadership, watch:

Lynch declined to discuss internal talks between the FBI and Justice Department just before FBI Director James Comey’s much-criticized decision to send a letter to Congress days ahead of the Nov. 8 election that said the bureau would be revisiting the email investigation.

The Justice Department opposed sending the letter, and Lynch said “the director was well aware of my views on it.”

“There will be a lot of analysis about the impact of all of these things,” she said. “I’ll let the pundits deal with that.”

Sessions is expected to easily win Senate confirmation and may revamp Justice Department priorities, not only on policing but on immigration and national security policy.

Lynch, the former top federal prosecutor in Brooklyn, said she had been through political transitions before and understands how they work. But she said she expected some of the priorities she established to remain intact through career lawyers at the Justice Department.

“You come in and you work as hard as you can, as long as you can, for the American people,” she said. “The value of that lives on.”