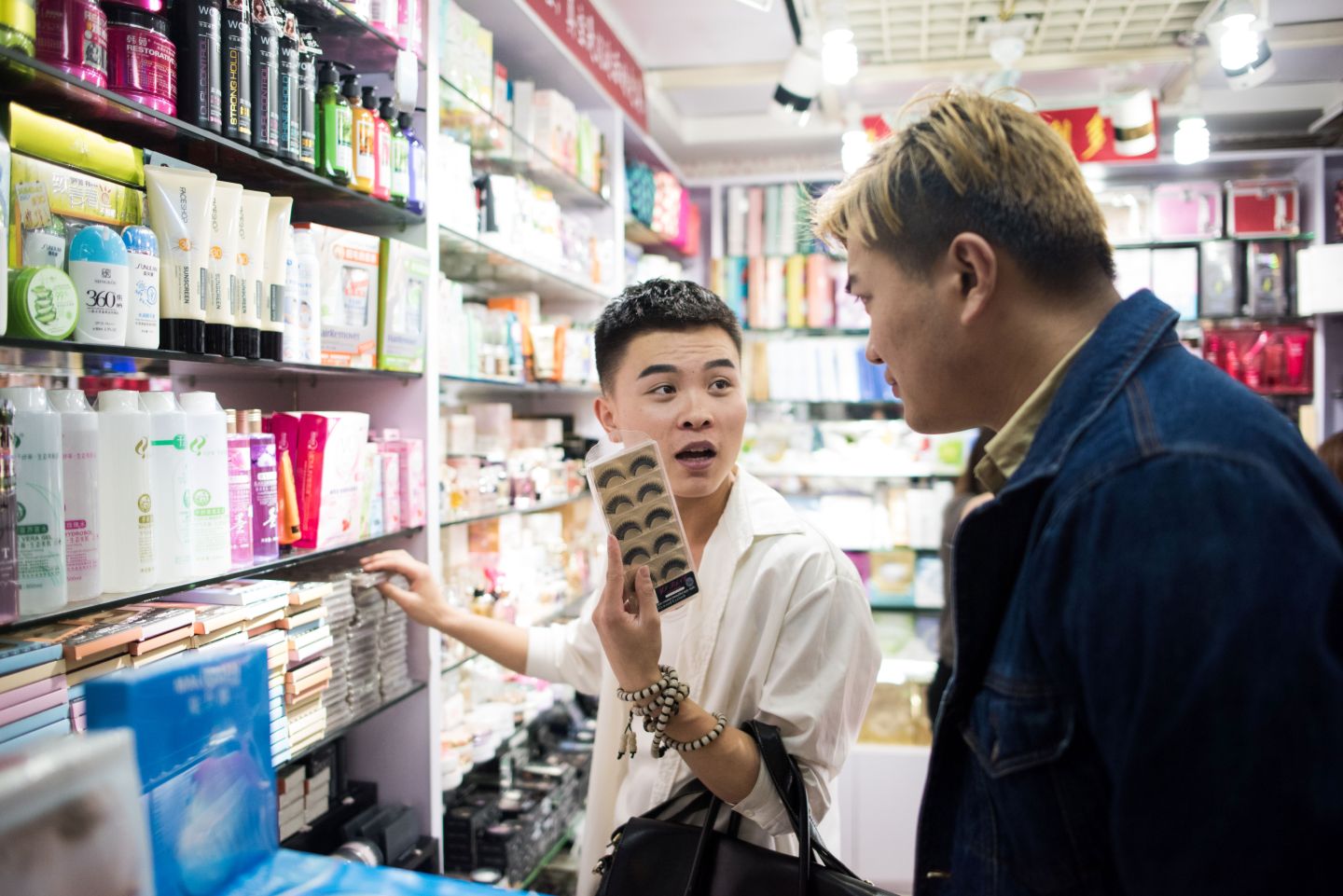 This picture taken on April 2, 2016, shows Yu Xiaoyang - who uses the stage name Xiao Bai meaning "Little White" - holding a pack of fake eyelashes during a shopping tour with his friends in Shanghai. In a bouffant blonde wig and outsize eyelashes, Yu Xiaoyang flamboyantly parades across a Shanghai stage, his fake breasts filling his skintight golden jumpsuit. Yu was among 20 contestants taking part in a cross-dressing competition in China's commercial hub. the contry only decriminalised homosexuality in 1997 and discrimination is common, although tolerance is greater in major cities, and the Shanghai Pride group mounts an annual series of events for the lesbian, gay, bisexual and transgender (LGBT) community and their supporters. / AFP / JOHANNES EISELE (Photo credit should read JOHANNES EISELE/AFP/Getty Images)
JOHANNES EISELE AFP/Getty Images

Midnight has just struck at a nightclub in Beijing’s toney Sanlitun neighborhood, and the dance floor is alive with lime-green wigs and clashing daiquiris. On the stage, a blonde drag queen called Hathor—after the ancient Egyptian deity—performs a strutting lip-sync to Mariah Carey’s “All I Want for Christmas is You,” while girls in vintage suits and penciled moustaches whoop encouragement.

“Every bar wants a gay night right now,” says Marlon Ma, 25, who puts on Beijing’s award-winning lesbian, gay, bisexual and transgender (LGBT) event GLAM and organized the city’s first drag show last year. “I move venues every six months,” he tells Fortune, rubbing thumb and forefingers together in the international sign for hard cash. “Before it was probably half foreigners but I’m seeing more Chinese now than ever before.”

Beijing’s gay scene has shifted from the fringes to the mainstream of Beijing nightlife, as the world’s most populous nation — or at least its major cities — becomes grudgingly more accepting of alternative lifestyles. Helping things along is the realization that China’s burgeoning LGBT community — estimated at some 70 million people— is a free-spending sector that few businesses can afford to ignore.

The country’s so-called “pink economy” is currently valued at $300 billion per annum, making it the world’s third largest after Europe and the U.S. (Globally, the LGBT community is estimated to spend more than $3 trillion each year.)

There’s even a Pride festival. Now in its eighth year, the ShanghaiPRIDE arts and advocacy festival encompasses concerts, film screenings, a “fun run” and gastronomy in China’s giddy financial hub. Although it was once treated with suspicion, all manner of businesses now clamor to be listed as sponsors.

“It’s progressing and we see a lot of new faces every year,” says cofounder Charlene Liu, 43, a semiconductor engineer by profession. “The most resistance we had was the first year, as nobody knew what it was — it was even my first PRIDE. One year we had to sit down with seven or eight government departments. But now we are cool with them.”

“The consumer power of the gay community is robust, but it has always been neglected,” says BlueD CEO and founder Geng Le — a former police officer. “We want to tell people that the pink economy is very strong.”

BlueD’s swanky new Beijing office testifies to that. The sweeping open-plan design is straight out of Silicon Valley, right down to the mid-floor gym equipment and mini-fridges crammed with Red Bull. But this is an unabashed LGBT enterprise; around three-quarters of staff are gay, and neat rows of computers sit amid rainbow murals and paintings of Greek-figured hunks draped in sheer clothes. Even the conference area chairs come in a vivid palate of rainbow colors. It’s here that BlueD just held a Pink Economy Innovation Contest that attracted more than 60 LGBT-facing business pitches.

Official endorsement wasn’t easily acquired. BlueD’s first incarnation, launched as a website 16 years ago, was a little more risqué than its current slick app and was frequently shutdown. But a proven commitment to social responsibility has since helped assuage the authorities. Now BlueD reminds users every three months to take a free HIV test at one of its centers (there’s one on the ground floor of its Beijing headquarters).

“BlueD has a lot of dialogue in China, with officials, and we help educate society about the gay community,” says Geng. “We push everything forward.”

The slowly growing acceptance of LGTB lifestyles prompted Zhu Qiming, the CEO of Beijing tech firm Star-G Technologies, to plow $140,000 into developing a mobile role-player computer game specifically for the gay market. Due for release later this year, Rainbow Super Band allows a player to choose an avatar and customize it to match their personality. (One of the avatars is a bible-clutching priest. “Do you think that’s a problem?” asks Zhu.)

Players can form relationships with other users though positive interactions, even buying virtual gifts — snazzy watches or shoes, for example — with real money, providing Star-G with a revenue stream. “We are making a very large-scale, complicated game for gay people,” Zhu tells Fortune. “We provide the social gameplay so this group can meet others with the same interests.”

And yet, acceptance is still a relative term throughout much of an an essentially priggish nation. Same-sex liaisons were famously celebrated in early Chinese literature and art. However, society became horribly strait-laced following Mao Zedong’s revolution, when sexuality was sublimated to the great cause of communism. Homosexually was made a crime, and while it was decriminalized in 1997 it remained classified as a “mental illness” until 2001.

Today, cultural friction remains due to deep-rooted values regarding the primacy of the family and the common desire for a male heir. Although regulations have now been loosened, for decades the One-Child Policy reinforced intense obligations felt by grown children to procreate to please their aging parents. As a result, an estimated 70% of gay Chinese have entered into a heterosexual marriage, according to prominent sexologist Li Yinhe.

Familial pressure can manifest in shocking ways. Last year, a man in central China’s Henan province alleged he was subjected to 19 days of beatings and the force-feeding of drugs at a mental hospital after coming out to his parents and wife as gay. The 37-year-old underwent the “conversion therapy” after being sectioned by his family for a “sexual preference disorder.”

Tolerance remains scant in the provinces and among broader audiences. Last summer, a gay Internet soap opera called Addiction was nixed three episodes short of its 15-show run, despite being the second most popular show on iQiyi — China’s version of Netflix. And Ma says that after his first drag show last year 95% of reader comments in the national media were horrifying. “Even gay people from other smaller cities were saying it’s disgusting,” he says. “They didn’t understand what a drag act was, that it’s a type of performance. That was really sad and a reality check.”

Neither will Chinese LGBT activism follow the same path as the West’s. There is no free press and the ruling Chinese Communist Party (CCP) is paranoid about any expression of community solidarity outside its auspices, especially those rooted in popular mobilization. “If you have 300 people walking down the street then it could be read as a protest,” says Ma. “It’s not just an antigay thing.”

For more on LGBT rights and business, watch Fortune’s video:

That means business and the pink dollar have to be at the vanguard. Last summer, ten same-sex couples won a free gay wedding ceremony and honeymoon in California courtesy of Taobao, the online-shopping platform run by Alibaba, which obviously felt comfortable enough to run the competition despite gay marriage being illegal in China. In January, a transgender man won a landmark court case for unfair dismissal against his employer. Says Ma: “Once my generation is grown up everything should be way easier.”

That is also when the real dividends of China’s pink economy will be reaped. As Liu points out, today’s gay Chinese with real spending power — aged 30 to 50 — are typically in closeted heterosexual relationships. But some young Chinese are able to “come out” in their teens or 20s to a somewhat more accepting society, and the beginnings of a social apparatus to help them thrive in their own skin. This generation has not yet reached its peak economic potential. “Right now, China’s pink economy is still in a nurturing stage,” says Liu. “But in five, ten years you’ll see it really blossoming.” Call it China’s LGBT Spring.