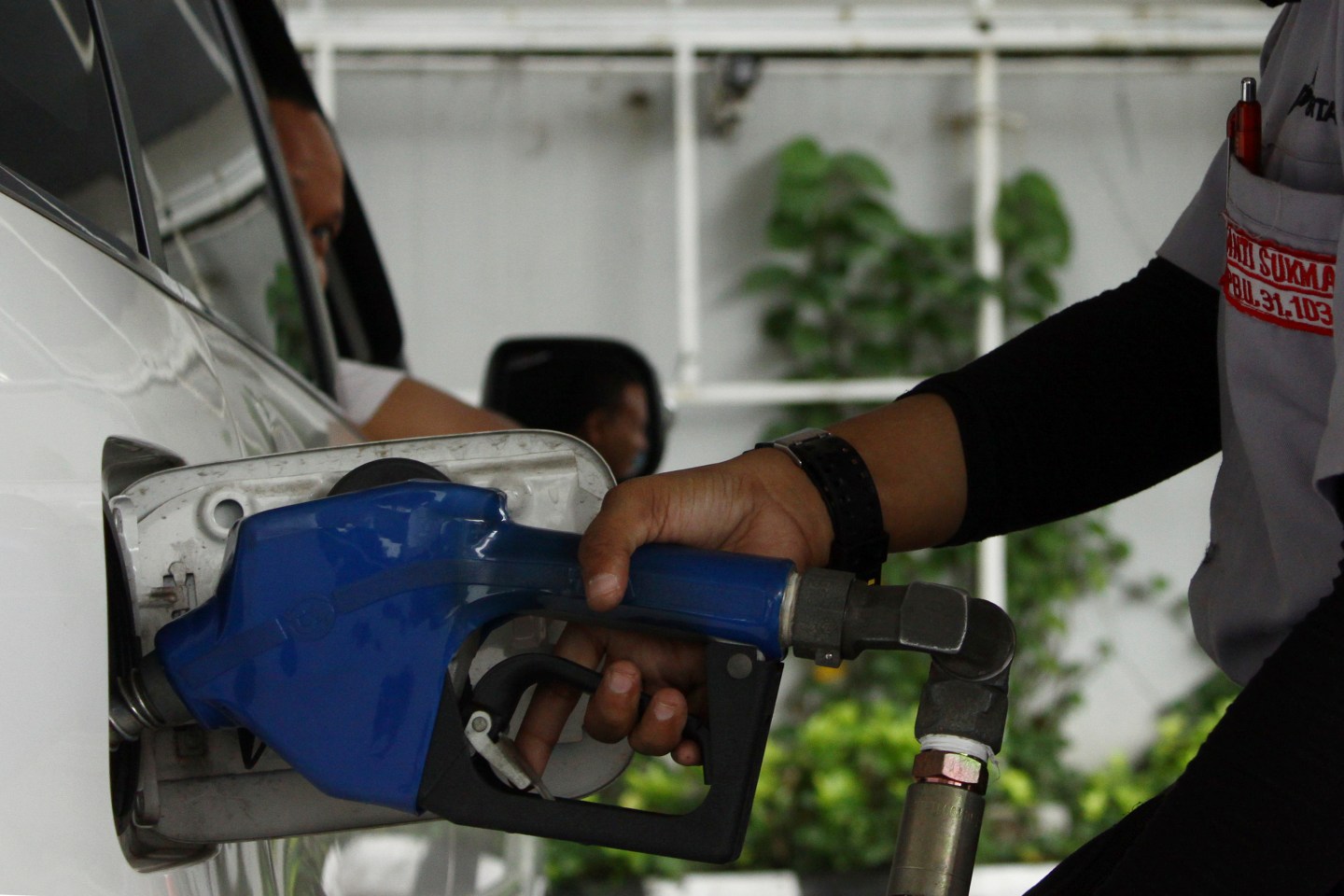 Refueling activities at gas stations in Jakarta, Indonesia on January 5, 2017. After raising the electricity tariff for household power 900 VA and a number of other top class on January 1, 2017, Indonesian government issued a policy to raise fuel prices in effect since January 5, 2017 amounted to IDR 300 per liter for non-subsidized fuel. The government said the increase in fuel prices is as a result of rising world oil prices after OPEC policies to cut world oil production in 2017. (Photo by Tubagus Aditya Irawan/Pacific Press) *** Please Use Credit from Credit Field ***(Sipa via AP Images)
Tubagus Aditya Irawan—Sipa USA via AP

This piece originally appeared on Oilprice.

Oil prices faltered at the start of the second week of the year, as fears set in about a rapid rebound in U.S. shale production. For the better part of two months, optimism surrounding the OPEC deal has buoyed oil prices, but bullish sentiment from speculators are showing early signs of abating, raising the possibility that the oil rally is running out of steam.

WTI and Brent sank more than 2.5 percent in intraday trading on Monday, after a report at the end of last week showed another solid build in the U.S. rig count, the tenth consecutive week that the oil industry added rigs back into the field. Aside from a single week in October, the U.S. oil industry has deployed more rigs in every week dating back to June, a remarkable run that has resulted in more than 200 fresh rigs drilling for oil. The gains in the rig count come even as oil prices have held steady in the mid—to low—$50s per barrel.

At the start of 2017, there are two major dynamics at play occurring at the same time, each pushing in opposite directions on the market. The OPEC deal is slated to take oil off the market, while U.S. drilling is expected to add new supply. The pace and magnitude of each trend will ultimately drive oil prices one way or the other.

On the positive side of the ledger, there are early signs that OPEC members are meeting their commitments. Saudi Arabia said last week that it is lowering its production in January by 486,000 barrels per day, a volume that it promised to cut as part of the November deal. That will take output down to 10.058 million barrels per day, a level that Riyadh was only required to meet as an average over the January to June time period. Cutting to that level ahead of time is a sign of good faith from Saudi Arabia, and increases the chances that OPEC will stay true to its promises.

On top of that, Kuwait’s envoy to OPEC said that Qatar, Kuwait and Oman were also complying with the cuts. In an interview with Bloomberg, Kuwait’s Nawal Al-Fezaia said that those countries already told customers that cuts were imminent. “It’s a good time to do maintenance on oil fields during production cuts,” Al-Fezaia said, noting that Kuwait will lower output from 2.89 mb/d in December to 2.7 mb/d by the end of January.

Market analysts paused a bit on news that Iraq’s oil exports from its southern ports on the Persian Gulf hit a record high in December, but the data has no bearing on whether or not Iraq will comply with the agreed upon cuts. “Achieving this record average will not affect Iraq’s decision to cut output from the beginning of 2017,” Oil Minister Jabbar Al-Luaibi told Bloomberg in an emailed statement. “Iraq is committed to achieving producers’ joint goals to control the oil glut in world markets.”

It is still early but all signs point to a stronger commitment from OPEC to adhere to the specifics of the cuts than market analysts might have given them credit for. That bodes well for a narrowing supply surplus—and ultimately a deficit—as well as falling inventories. In other words, OPEC is succeeding in putting upward pressure on prices.

However, the flip side of the equation is faster drilling from the U.S., where rig counts continue to climb. Oil output, according to EIA weekly surveys, is up roughly 300,000 bpd from summer lows, with more supply expected to come online in the months ahead as drilling picks up pace.

It is unclear, at this point, how rising U.S. supply and falling OPEC output will ultimately balance out. For now, the consensus seems to be tightening conditions in the first half of 2017, with much greater uncertainty in the second half, but that remains to be seen.

What is clear is that oil speculators have built up such a large bullish bet on oil that they have opened up crude to near-term downside risk. According to Reuters, hedge funds and other money managers amassed net-long positions in WTI and Brent equivalent to 796 million barrels in the last week of December, which was nearly double the amount from mid-November. The OPEC deal clearly fueled a huge speculative rush in rising oil prices, which, not coincidentally, corresponded with real gains in crude prices.

But at this point, there are very few short positions left in oil, while a massive volume of long bets have built up. That suggests two things, both of which are bearish for oil: there is not a lot of money left to go long, lowering the chances of further prices gains; and the potential for a correction in prices is very high at this point. Indeed, in the most recent week for which data is available, net-long positions declined a bit, raising the possibility that bullish bets have peaked. All it will take is a bit of bearish news to spark a downturn in prices.

There are a few minor worrying signs for oil prices that could crop up as additional bearish forces in the next few weeks. The U.S. DOE announced on January 9 a “notice of sale” from its strategic petroleum reserve, with plans to sell 8 million barrels for delivery over the course of February, March and April. Meanwhile, Libya is seeing rapid gains in oil exports after the reopening of a key export terminal, with output jumping to 700,000 bpd, according to the latest data, up sharply from the 580,000 it produced in November and the 300,000 bpd it exported before it started restoring output last summer. Moreover, Nigeria – which, like Libya, is exempt from the OPEC deal—is intent on restoring production. It may struggle to do that with the recent shuttering of the Trans Niger Pipeline, potential strikes from oil workers unions and the announcement from the Niger Delta Avengers that attacks will resume this year. In fact, production appears to have declined in December, falling 200,000 bpd to 1.45 mb/d, because of some of these issues. But if those problems can be overcome, Nigeria has latent production capacity that could come back online at some point.

More from Oilprice.com:
• A Rosy Future For U.S. LNG
• Is A Full Recovery Possible For Iranian Oil And Gas?
• Oil Drops As Signs Of Rising U.S. Output Offset OPEC Optimism

And in a sign that there is not a lot of room on the upside, a kerfuffle in the Persian Gulf over the weekend did nothing to affect oil prices. A U.S. Navy destroyer fired three warning shots towards Iranian ships, an incident that in the past would have led to a sharp, even if brief, rally in crude prices. Instead, the markets shrugged off the incident—WTI and Brent sank on the first trading day after the event, on unrelated news. “The market is overbought and under a lot of downward pressure,” Bob Yawger, director of the futures division at Mizuho Securities USA Inc., told Bloomberg. “The shots fired at the Iranian boats in the Strait of Hormuz didn’t do anything to the market. A few years ago that would have added a couple dollars to the price.”