540 Tons of Metals Entered River in 2015 Colorado Mine Spill 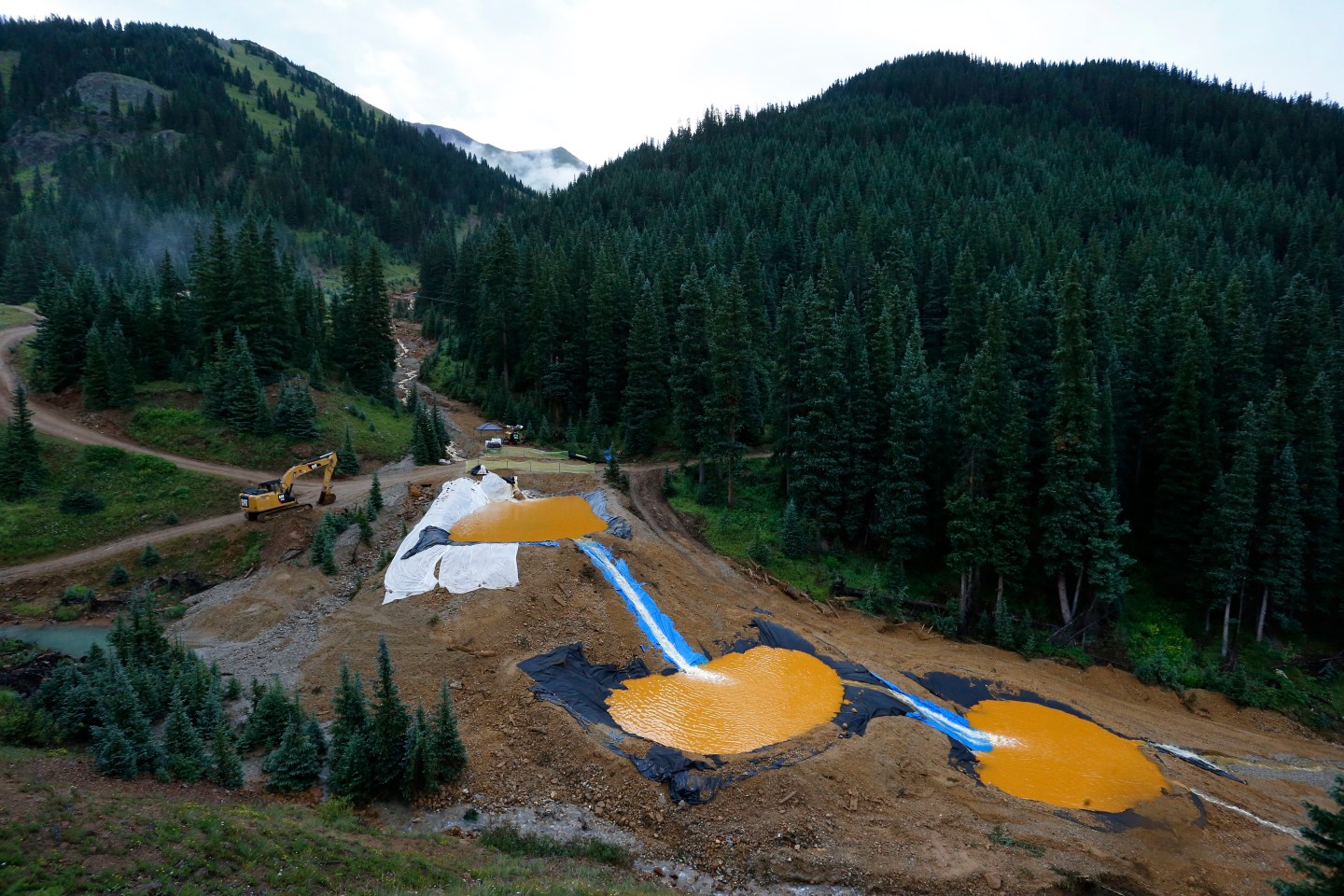 FILE - In this Aug. 12, 2015 file photo, water flows through a series of retention ponds built to contain and filter out heavy metals and chemicals from the Gold King mine chemical accident, in the spillway about 1/4 mile downstream from the mine, outside Silverton, Colo. The massive mine waste spill in southwestern Colorado contributed to water quality problems for up to nine months, the Environmental Protection Agency said Friday, Jan. 6, 2017. Contamination from the August 2015 spill at the Gold King Mine may also have caused pollution problems last year when annual spring snowmelt swelled rivers. (AP Photo/Brennan Linsley, file)
Brennan Linsley AP

Nearly 540 tons of metals—mostly iron and aluminum—contaminated the Animas River over nine hours during a massive wastewater spill from an abandoned Colorado gold mine, the Environmental Protection Agency said Friday in a new report on the 2015 blowout that turned rivers in three states a sickly yellow.

The total amount of metals entering the river system was comparable to levels during one or two days of high spring runoff, although the concentration of metals was significantly higher at the spill’s peak, the report said.

In February, the EPA estimated the amount of metals in the release at 440 tons. The agency said additional data and improved analysis resulted in the higher final estimate.

The EPA said its research supports earlier statements that water quality in the affected river system has returned to pre-spill levels.

An EPA-led contractor inadvertently triggered the 3-million-gallon spill while doing preliminary cleanup work at the old Gold King Mine near Silverton, Colorado. The blowout affected rivers in Colorado, New Mexico and Utah.

The EPA said in its report that only 1% of the metals came from inside the mine, while 99% were “scoured” from waste piles on nearby hills and stream beds. The iron and aluminum reacted with the river water to cause the eye-catching mustard color that was visible for days as the plume traveled down the river system into Lake Powell, the EPA said.

Besides iron and aluminum, the spill released manganese, lead, copper, arsenic, zinc, cadmium and a small amount of mercury into the river, the EPA said.

The EPA said last month it will pay $4.5 million to state, local and tribal governments for their emergency responses, but the agency rejected $20.4 million in other requests for past and future expenses.

New Mexico Environment Secretary Butch Tongate accused the EPA of using the taxpayer-funded report to try to defend its actions. The state has sued the agency over the spill.

In Utah, state government spokeswoman Erica Brown Gaddis said the report shows the metals have moved into Lake Powell, a vast reservoir in her state, highlighting the need for broader research on the effects of wastewater draining from other inactive Colorado mines into the region’s rivers.

Colorado officials said they had no comment on the report.