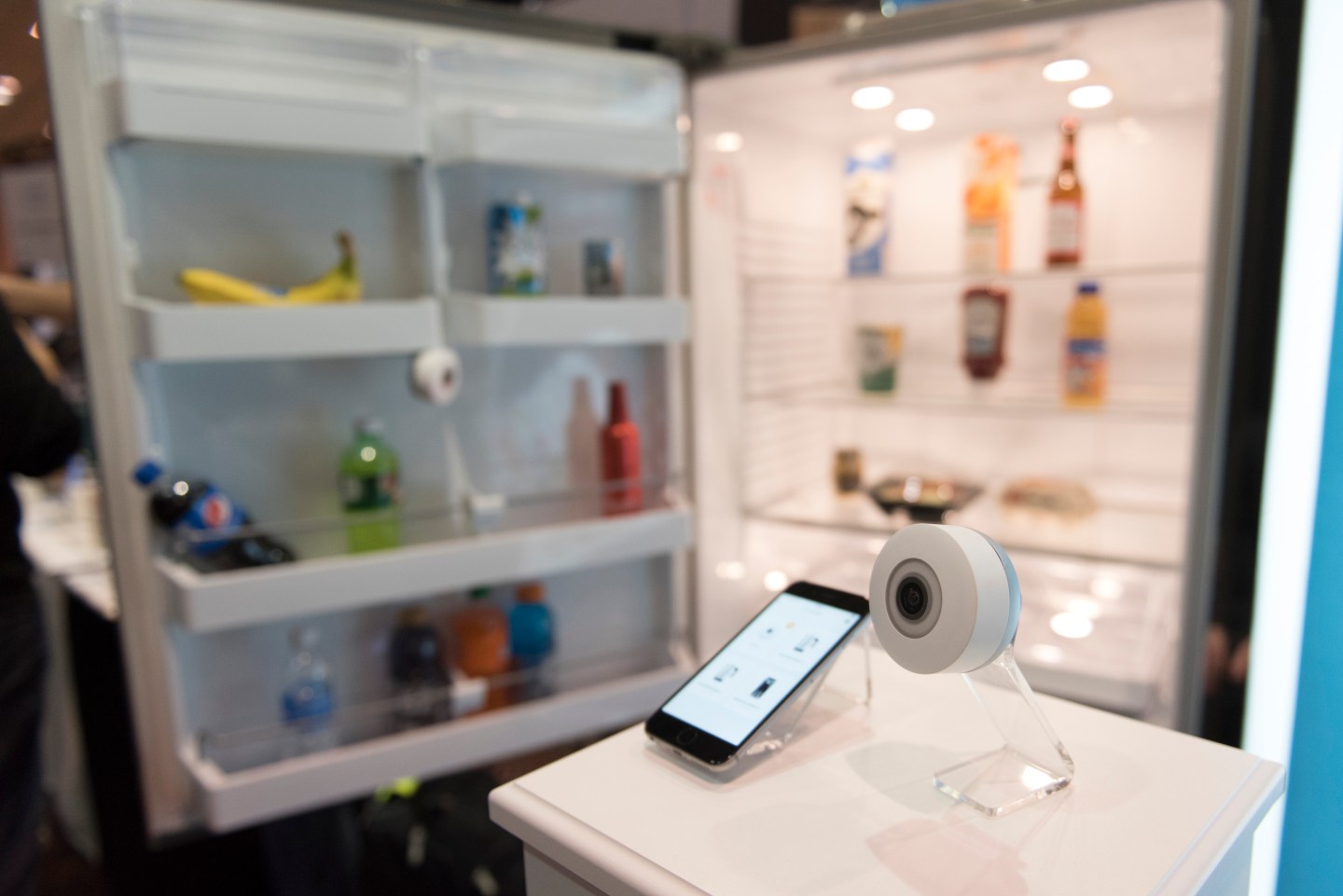 The refrigerator camera FridgeCam produced by Smarter on show at the CES consumer technology show in Las Vegas, USA, 3 January 2017. The camera allows users to check the temperature and contents of the fridge using their mobile phone. Photo by: Jason Ogulnik/picture-alliance/dpa/AP Images
Jason Ogulnik — Picture Alliance/DPA/AP

Smarter is unveiling its FridgeCam, a refrigerator camera that can tell you when your food is about to expire or when you are running low on groceries.

The London-based company unveiled the product — which is part of the ever-growing Internet of Things (making everyday objects smart and connected) — at CES 2017, the big tech trade show in Las Vegas this week.

Smarter’s FridgeCam is a wireless camera with an app that allows users to see the contents of their fridge from anywhere, receive reminders about expiration dates, and pick up groceries that are running low.

Scheduled for release in the first quarter of 2017, the Smarter FridgeCam was designed to help address the global food waste crisis by notifying consumers of approaching expiration dates and suggesting ways to use foods before they go bad.

Additional features include alerts when the refrigerator temperature ventures outside the ideal range, notifications when food items are removed from the fridge, and auto-replenish ordering via the user’s preferred online grocer.

Geo-location reminders will alert the user when a grocery store is nearby, so milk, eggs, or other essentials can be purchased. The Smarter FridgeCam will sell for $150.

Christian Lane, creator of Smarter, launched his first company at 19 with the backing of investors from Dragon’s Den, the U.K. version of Shark Tank. Christian launched Smarter in 2013, with the goal of making people’s lives easier through connected technology. He is the recipient of 2015 Great Britain Young Entrepreneur of the Year, London Design Awards, and other accolades for his IoT contributions.

“We are very excited to showcase our FridgeCam with its full range of functions for the first time anywhere in the world,” Lane said in a statement. “We created the FridgeCam to not only save people money, time, and energy, but also tackle food waste head-on in the process. In the U.S., average households can waste anywhere between $1,365 to $2,275 of food every year.”

Smarter’s other products, the iKettle and Smarter Coffee Maker, are sold in more than 1,000 stores in the U.K. and Europe. By the end of 2017, Smarter expects to become a global connected platform that connects consumers to their kitchens, making grocery shopping and food waste a thing of the past.

Smarter is self-funded and it has 20 employees.