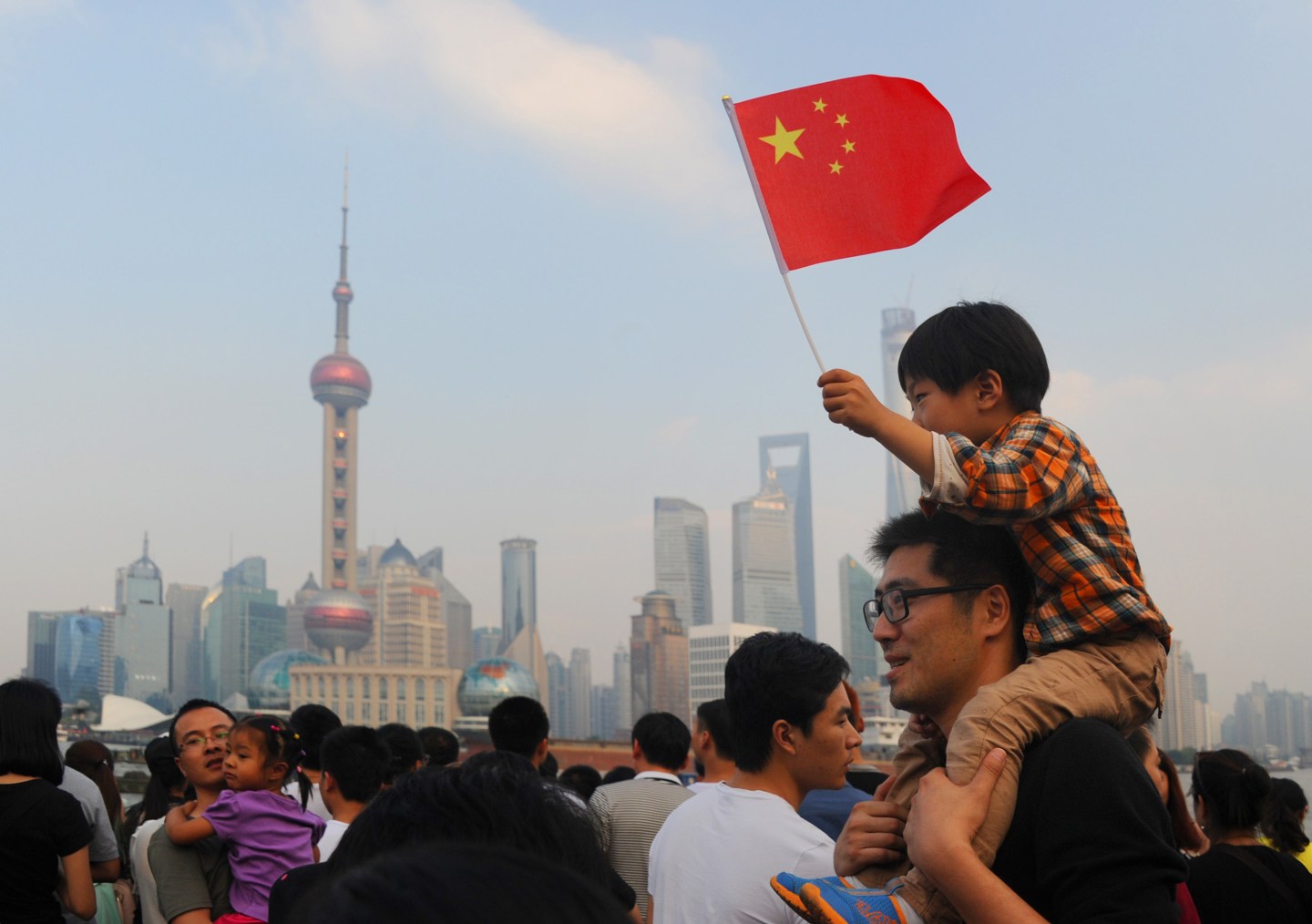 SHANGHAI, CHINA - OCTOBER 02: (CHINA OUT) A boy waves a Chinese flag riding on his father's neck at the Bund during the second day of the National Day holiday on October 2, 2014 in Shanghai, China. China's golden-week National Day holiday is expected to bring a tourism peak throughout the country. (Photo by VCG/VCG via Getty Images)
VCG/VCG via Getty Images

China’s economic growth could slow to 6.5% this year from about 6.7% in 2016, a government-run think tank said on Tuesday, while suggesting a one-off devaluation could help stabilize the yuan currency.

In an article in the Shanghai Securities News, the forecasting department at State Information Center (SIC) said momentum from new technology would continue to stimulate economic growth but could not stop the broader slowing trend.

Meanwhile, authorities should increase the role of the market in formation of the yuan exchange rate, increase the currency’s flexibility “and even conduct a one-off devaluation of the renminbi, and thereby maintain renminbi stability at a balanced level,” it said.

The yuan fell nearly 7% last year – its biggest annual loss against the dollar since 1994 – under pressure from sluggish economic growth and a strong dollar.

China’s last one-off currency devaluation, a 2% move in August 2015, shocked global markets and was widely viewed by traders and economists as a failure.

With the yuan still weakening and capital outflows steadily eroding China’s forex reserves, pundits have discussed the possibility of a second devaluation, but there has been little indication that policymakers were considering such a move.

Capital outflows have been a growing concern for the government in the past year as it attempted to put the economy back on track and keep the currency stable without exhausting its reserves, which tumbled to $3.052 trillion in November, the lowest in almost six years.

For more on current affairs in China, watch Fortune’s video:

China’s fundamentals including its economy, monetary policy, trade surplus and the ability to attract foreign investment all point to the fact that there is no need for the government to worry too much about the total amount of foreign exchange reserves it holds, the state-owned People’s Daily said on Tuesday.

“China has no need to ‘regard foreign exchange reserves as gold,'” the overseas edition of People’s Daily said.

China’s foreign exchange regulator said late on Saturday that from the start of the year it would step up scrutiny on individual foreign currency purchases and strengthen punishment for illegal money outflows, although the $50,000 annual individual quota will remain unchanged.

China’s economy grew 6.7% in the third quarter of 2016 from a year earlier and looked set to achieve the government’s full-year forecast of 6.5-7%, buoyed by higher government spending, a housing rally and record bank lending that have also led to an explosive increase in debt.

Many analysts believe growth is lower than official data suggests, but acknowledge that the construction boom has given activity a better-than-expected boost this year.