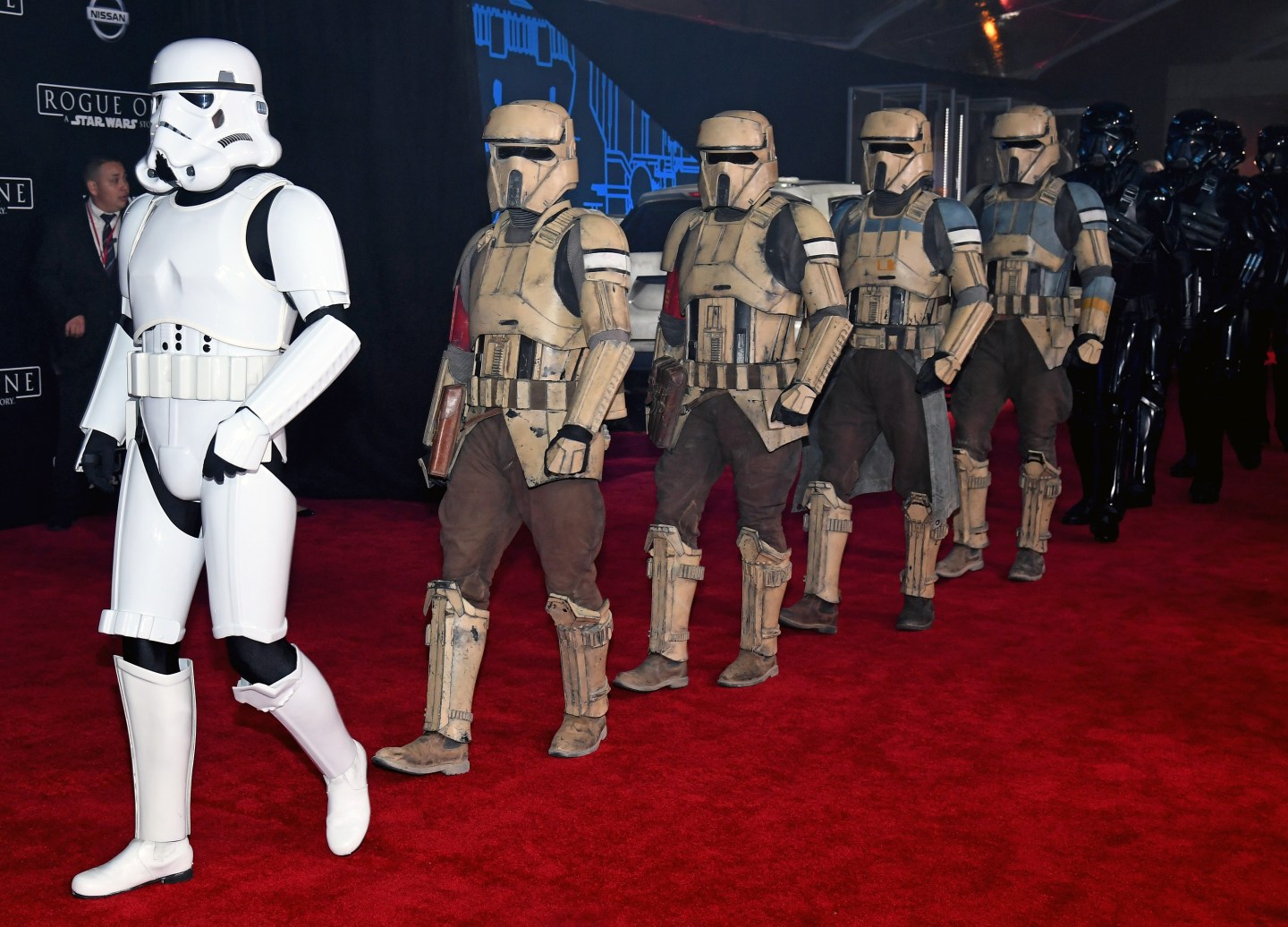 Stormtrooper characters march down the red carpet at the premiere of Walt Disney Pictures and Lucasfilm's "Rogue One: A Star Wars Story" at the Pantages Theatre in Hollywood, Dec. 10, 2016.
Ethan Miller—Getty Images

Rogue One: A Star Wars Story remains powerful at the U.S. holiday box office with a dominant $15 million on Christmas Eve and projections of a $120 million-plus haul over the six-day Dec. 21-26 period.

Illumination-Universal’s animated comedy Sing easily led the rest of the pack on Christmas Eve with a solid $7.9 million, followed by Sony’s Passengers with $2.9 million, Fox’s Assassin’s Creed with $2.2 million and Fox’s Why Him? with $1.8 million.

Paramount launched Denzel Washington-Viola Davis’s Fences with $750,000 at 1,547 sites in Saturday night showings and plans to expand the drama to about 2,200 locations Sunday.

Overall moviegoing slowed on Christmas Eve, as is typical, with Rogue One falling about 33 percent from Friday and Sing declining about 40 percent. Business should rebound sharply on Christmas Day on Sunday and on Monday, an official holiday for many.

Disney-Lucas film’s Rogue One, starring Felicity Jones, wound up business on Christmas Eve with about $260 million domestically in its first nine days and is projected to finish the holiday on Monday with about $327 million. That will be enough to pull it past Suicide Squad as the eighth highest domestic grosser of the year.

Rogue One, the eighth Star Wars movie, is running about 42 percent behind the pace of Star Wars Episode VII: The Force Awakens, which opened a year ago and grossed a still-stunning $571 million in its first 11 days on its way to a record $948 million domestic total.

Sing is projected to come in a second with about $71.5 million over the six days – in line with forecasts – followed by the Jennifer Lawrence-Chris Pratt sci-fier Passengers at about $29 million to $30 million and videogame adaptation Assassin’s Creed at $22.6 million.

James Franco’s romantic comedy Why Him?, which opened Friday, is forecast to finish the four-day weekend with about $14.4 million.

For more on Star Wars, watch:

Patriots Day, from CBS Films and Lionsgate, took in $34,336 on Christmas Eve from seven locations and is project to wind up the six-day holiday break with about $280,000. The Boston Marathon bombing movie is directed by Peter Berg and stars Mark Wahlberg.