Anti-refugee Sentiment From Election Spills Over to States 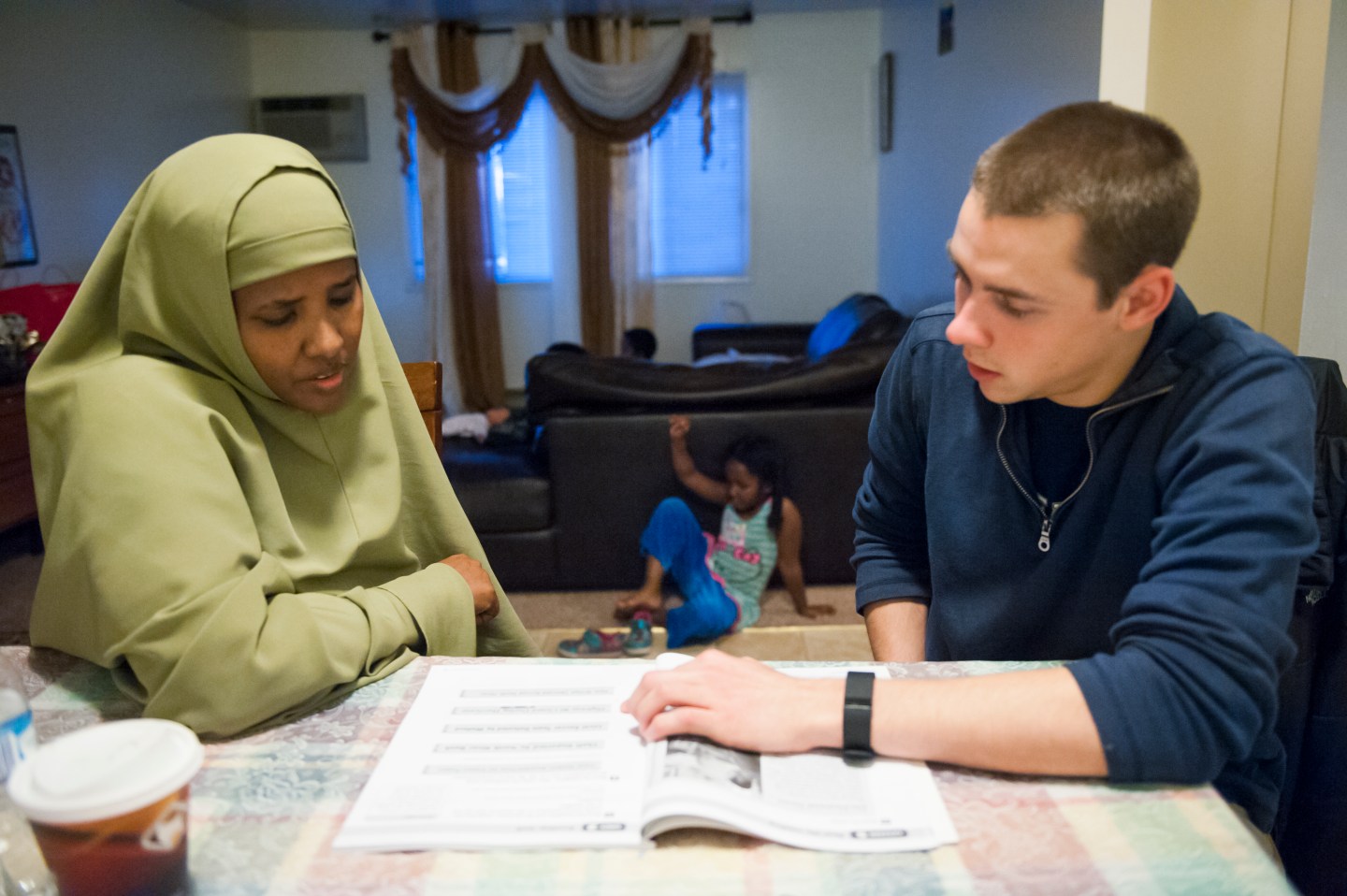 GRAND FORKS, ND - DECEMBER 18: Ayan Abdi (Left), a Somali, works on an English language lesson at her family's home with Tony Ross, a University of North Dakota graduate student, who volunteers for the Global Friends Coalition, which facilitates tutoring and other services for refugees and other immigrants. A Grand Forks cafe owned by a Somali family was burned in an act of arson on the day Donald Trump announced his plans to bar Muslims from entering the country, bringing tensions to the surface. (Photo by Andrew Cullen/For the Washington Post)
The Washington Post The Washington Post/Getty Images

The push to restrict refugee resettlements and immigration in the U.S. that figured so prominently in Donald Trump’s election is now headed to states that are preparing to convene their legislative sessions early next year, immigration advocates said.

In Montana, which took in just nine refugee families from January to early December, about a dozen bill requests related to refugees, immigration and terrorism have been filed ahead of next month’s session. The measures include requiring resettlement agencies to carry insurance that would defray the cost of prosecuting refugees who commit violent crimes and allowing towns and cities to request a moratorium on resettlements in their communities.

Refugee rights advocates say those measures are a sign of what is to come as the anti-refugee rhetoric that featured prominently in the presidential election spills over to statehouses and local governments.

“It’s pretty widely known that this is going to be a hard year for those of us who are seeking to protect the rights of refugees and immigrants,” said S.K. Rossi, advocacy and policy director for the ACLU of Montana.

The president-elect campaigned on building a border wall with Mexico to stop illegal immigration, deporting immigrants who are in the nation illegally and halting the resettlement of refugees to strengthen the federal program that vets them.

Some down-ticket conservative candidates took Trump’s cue and integrated the anti-refugee platform into their campaigns. Montana Rep. Ryan Zinke, for example, spoke multiple times about the possibility of child terrorists slipping into the U.S.

Empowered by the issue’s prominence, anti-immigrant groups have state and local governments in their sights as targets to push restrictive measures in addition to whatever changes may happen at the federal level, said Michele McKenzie, deputy director of the Minneapolis organization The Advocates for Human Rights.

That would lead to further manipulation of the deeply visceral fear of newcomers to the U.S. that was exposed during the election campaigns, McKenzie said.

There Already Is Something Like a Muslim Registry, and Peter Thiel Owns It

“It absolutely does not end with the presidential election,” McKenzie said. “It’s a national strategy by a small but organized group of anti-immigration advocates and anti-refugee advocates.”

It’s unclear if Trump will make good on his pledges. But his election appears to be enough for an Indiana legislative panel led by state Sen. Mike Delph, which didn’t recommend any legislation after it spent eight months reviewing illegal immigration.

Delph said after the election that the U.S. government’s actions may make immigration less of a problem for the states.

Conservative lawmakers in other states such as Montana aren’t waiting to find out, and are instead looking at measures to give towns and cities a larger voice in the federal resettlement process.

“We need to get serious,” said Nancy Ballance, a Republican state representative from Ravalli County.

Ballance said refugees are a “gigantic issue” in her southwestern Montana county, just south of the liberal college city of Missoula. “People expect to see some legislation brought,” she said.

Missoula has taken in all of the state’s refugees this year and has been approved to accept another 150 through September. That makes leaders in rural surrounding areas nervous that people will settle in their towns, where housing and job opportunities are limited.

“If Missoula wants to have their soft-landing program, that’s fine,” said Bob Keenan, a Republican state senator from Bigfork, a town north of Missoula on Flathead Lake. “Those communities may not be as willing to expend their social service dollars for a soft landing.”

Soft Landing Missoula and the International Rescue Committee have been the main organizations working with the federal and state governments to resettle the refugees, who come from Congo, Iraq and Eritrea.

Mary Poole, Soft Landing Missoula’s director, said much of the legislation being proposed in Montana is based on misinformation. Some measures—such as requiring surveys of communities’ capacity to take refugees — already are part of the federal process, she said.

“I hope people are still open to talking to us and getting accurate information,” Poole said. “Our doors are definitely open for conversation.”

Other state-level bills conflict with federal refugee laws and will lead to lawsuits, Rossi said.

Just the act of introducing these measures sustains the anti-refugee fear and xenophobia that grew during the election, the ACLU lobbyist said.