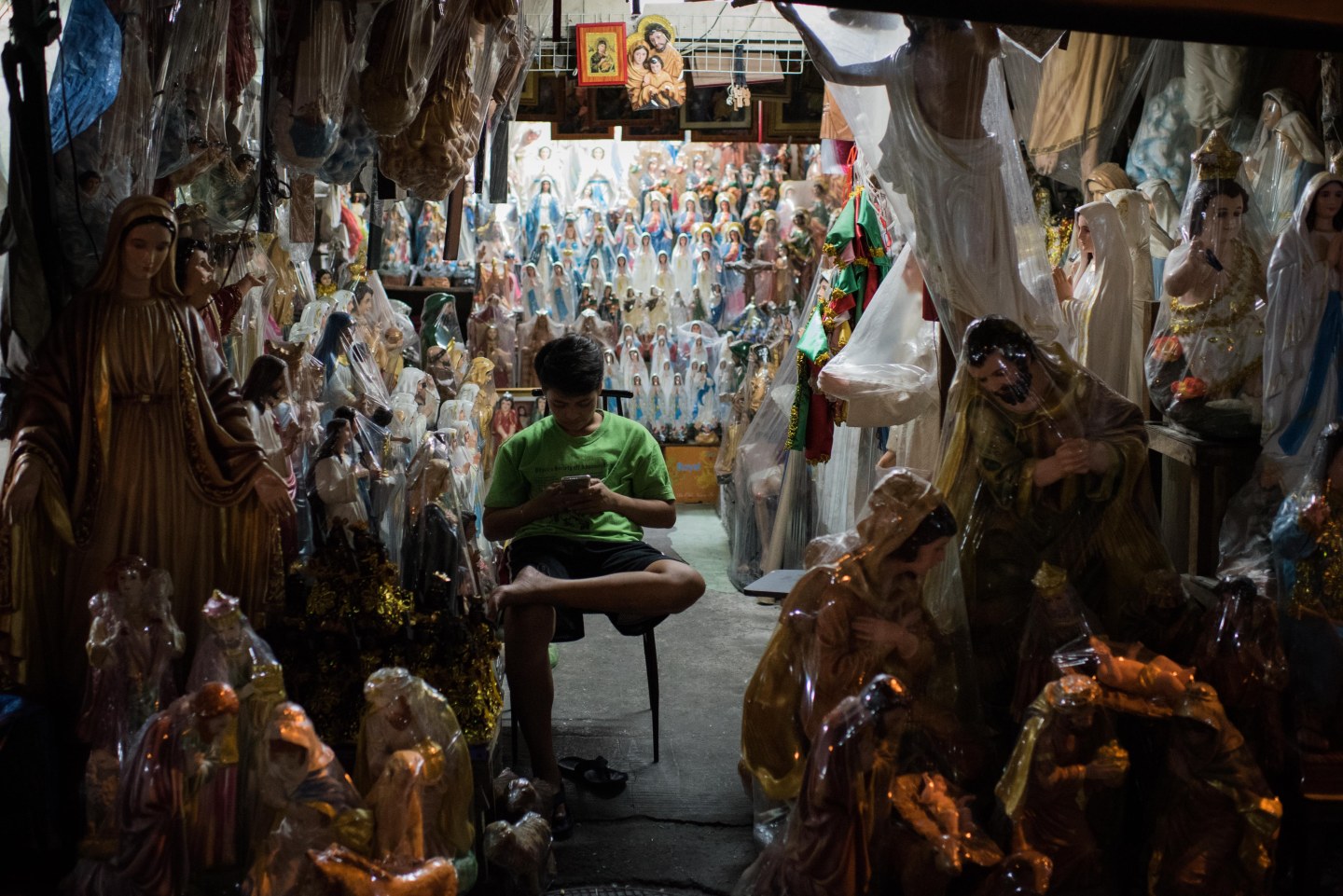 MANILA, PHILIPPINES - DECEMBER 23: A shop keeper waits for customers in a shop filled with religious images on December 23, 2016 in Manila, Philippines. Philippine president Rodrigo Duterte has said he wanted the Constitution amended to allow Philippine leaders to wield martial law powers without judicial and congressional approval, a move he said is necessary to contain the ongoing 'drug menace' and maintain peace and security in the country. Around 5,882 people have been killed across the country since President Rodrigo Duterte launched his war on illegal drugs five months ago, according to figures from the Philippine National Police. An average of 25 victims were killed daily during the five-month period, and police kill 97 percent of those they shoot, leaving 33 dead for every person wounded according to the figures. Last October, Duterte himself said the country could expect about 20,000 or 30,000 more deaths in his administration's bloody war on drugs. (Photo by Dondi Tawatao/Getty Images)
Dondi Tawatao Getty Images

Sixteen people were wounded in a grenade explosion outside a Catholic church during a Christmas eve mass in the Philippines’ restive southern island of Mindanao, a priest and police said on Saturday.

Security forces across Southeast Asia are on alert ahead of the Christmas and New Year holidays, as police in Australia and Indonesia said they had foiled bomb plots and Malaysian security forces arrested suspected militants.

No group has claimed responsibility for the Mindanao attack, but Muslim rebels and Islamist extremists are known to be active in the province, where there have been blasts in the past.

Bernardo Tayong, Midsayap town police chief, said most of the injured had been standing outside the Sto. Nino parish church in Midsayap town, North Cotabato.

Europe on Christmas High Alert After Truck Attack in Berlin

“There was no more concluding prayers as there was a commotion,” Virador said. “People hurriedly left the Church.”

One police officer was wounded because he was standing near a patrol car where the grenade exploded, about 30 metres from the church entrance, Tayong said.

Tayong said bomb experts were still at the site. There were reports that another grenade or improvised bomb was also left in the area. “Our details are sketchy yet,” he said.

The U.S. embassy in Manila said citizens had been warned against travelling to volatile southern islands due to kidnapping and bombing threats.

In September, 14 people died and 70 were wounded when an improvised bomb exploded in a crowded market in Davao City, hometown of President Rodrigo Duterte. Nine people, who were linked to an Islamic State militant-affiliated group have been arrested for the attack.