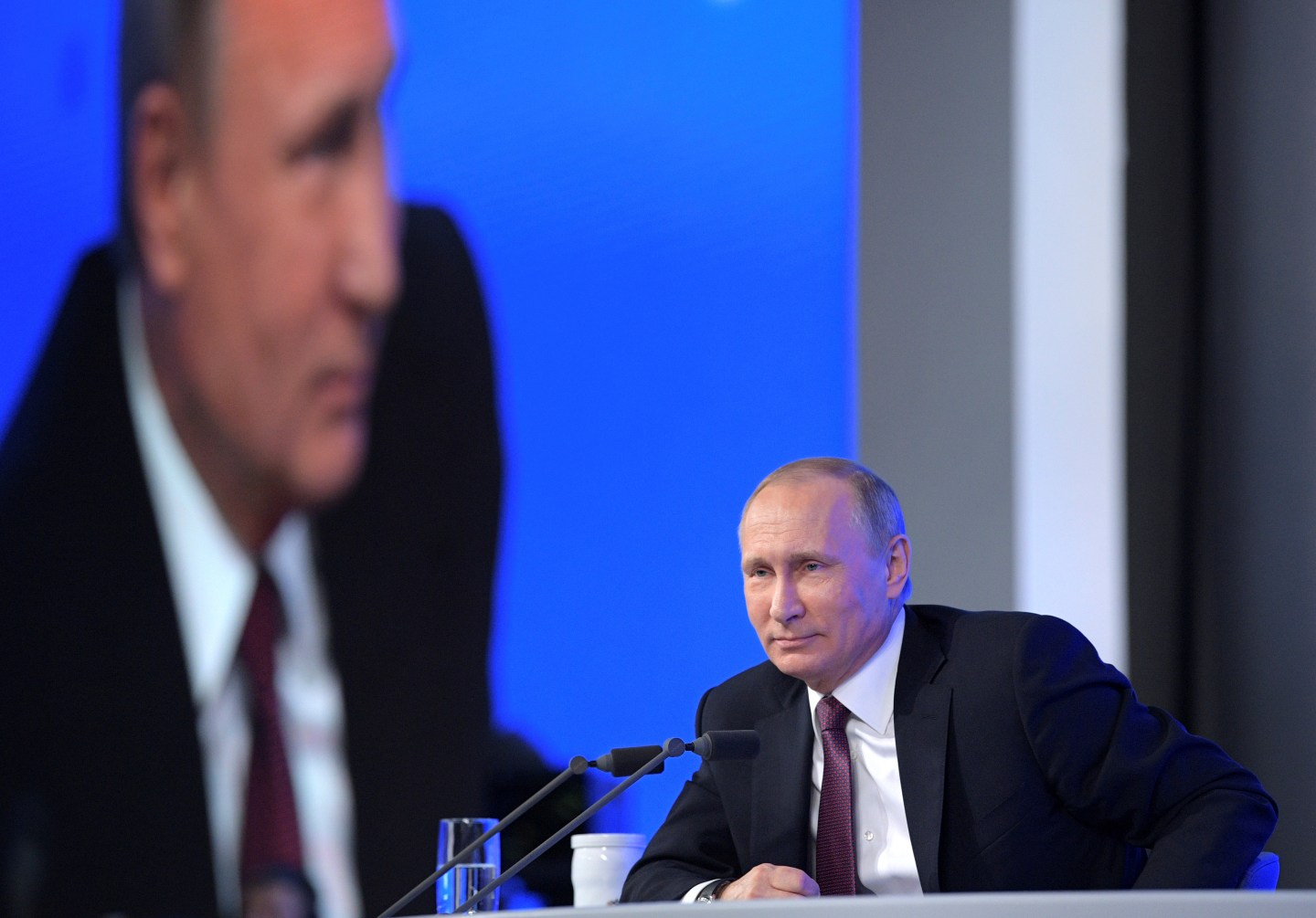 Russia’s Vladimir Putin said on Friday he was unfazed by President-elect Donald Trump’s plans to boost the U.S. nuclear arsenal, praising Trump for being in touch with U.S. public opinion while branding the Democrats sore election losers.

Speaking at his annual news conference in Moscow, the Russian president said earlier comments he had made about his country’s own military modernization had been misunderstood in the United States and that he accepted that the U.S. military, not Russia’s, was the most powerful in the world.

Putin said on Thursday Russia’s military was “stronger than any potential aggressor”. Trump later tweeted that the United States “must greatly strengthen and expand its nuclear capability until such time as the world comes to its senses regarding nukes.”

Asked to clarify his comments on Friday, MSNBC reported that Trump had said: “Let it be an arms race. We will outmatch them at every pass and outlast them all.”

But Putin said he did not regard the United States as a potential aggressor and had only been talking about countries he thought might realistically launch an attack on Russia.

“I was a bit surprised by the statements from some representatives of the current U.S. administration who for some reason started to prove that the U.S. military was the most powerful in the world,” Putin said, referring to State Department comments from Thursday.

“Nobody is arguing with that.”

Putin said he saw nothing new or remarkable about Trump’s own statement about wanting to expand U.S. nuclear capabilities anyway.

“If anyone is unleashing an arms race it’s not us … We will never spend resources on an arms race that we can’t afford.”

Trump’s comments, made in a tweet, alarmed non-proliferation experts who said that a boost to the U.S. arsenal could fuel global tensions.

The Russian leader, speaking in a news conference that lasted just under four hours, fielded questions on everything from Syria to the economy, Ukraine and sports doping.

But he only became really animated when talking about the United States, launching a scathing attack on the Democrats.

He said they had forgotten the meaning of their own name and were sore losers.

“The current administration and the leadership of the Democratic Party are trying to blame all their failures on external factors,” said Putin.

“(We are talking about) a party which has clearly forgotten the original meaning of its own name. They (the Democrats) are losing on all fronts and looking elsewhere for things to blame. In my view this, how shall I say it, degrades their own dignity. You have to know how to lose with dignity.”

The Obama administration and U.S. intelligence officials have accused Russia of trying to interfere with the U.S. election by hacking Democratic Party accounts. Information from those hacks was leaked online, causing political problems for Democratic candidate Hillary Clinton.

Putin dismissed suggestions Moscow had helped Trump to victory in any way however.

“It’s not like that,” he said. “All of this (the accusations) speaks of the current administration’s systemic problems.”

Putin, who spoke positively of Trump before his election win, said that only Moscow had believed in his victory however.

“Trump understood the mood of the people and kept going until the end, when nobody believed in him,” Putin said, adding with a smile. “Except for you and me.”

Putin said he would be willing to visit the United States if Trump invited him and expected U.S.-Russia ties to return to normal now, particularly in the security and economic spheres.

He was more cagey when it came to his own political future though, saying he needed time before deciding whether he would run for president again in 2018. Most Kremlin-watchers believe he will stand and win again.

“I will look at what’s going on in the country, in the world,” said Putin coyly, calling a reporter who had asked him to provide reasons why people would want to vote for him again “a provocateur”.