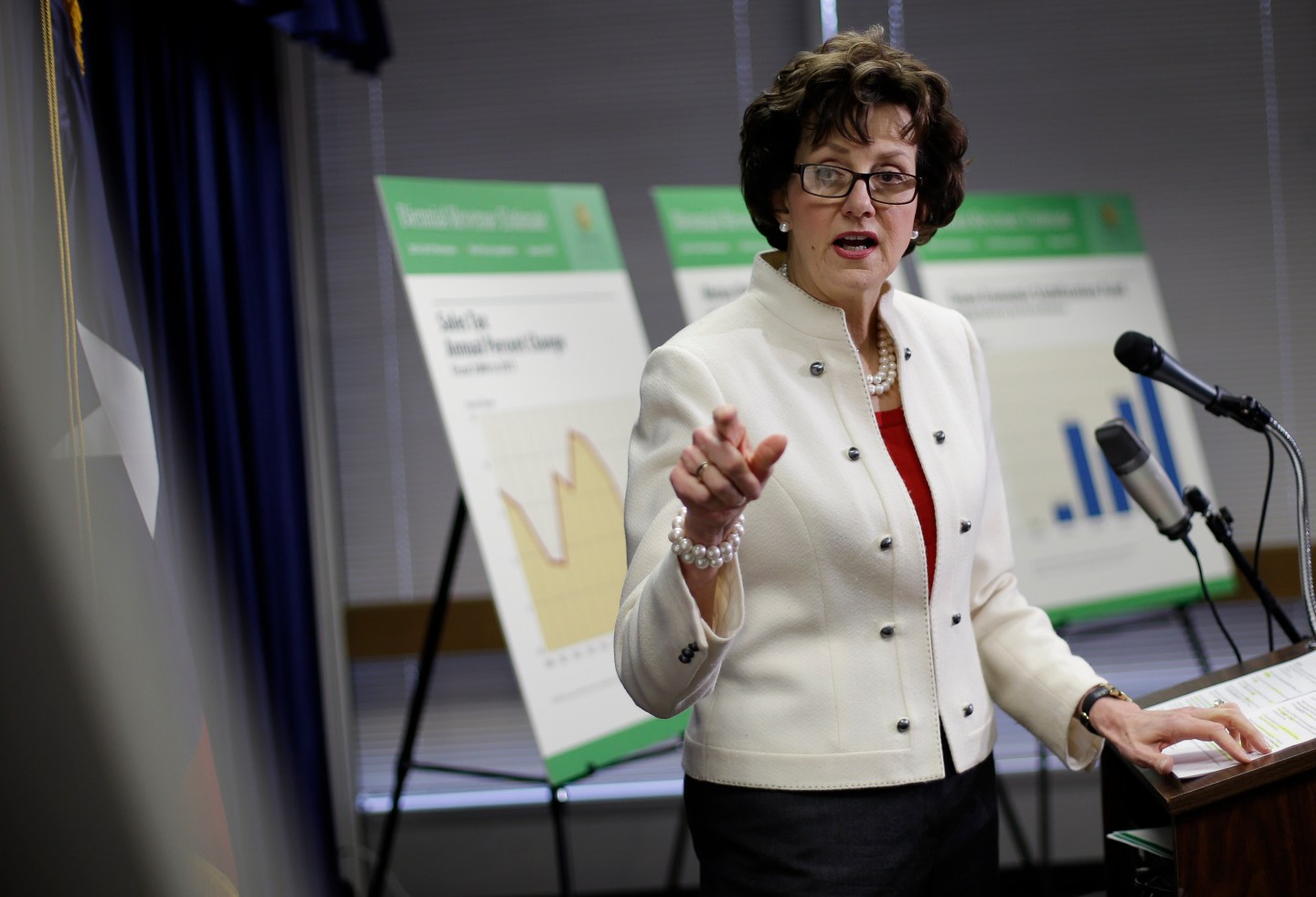 Texas Comptroller Susan Combs stands before her charts during a news conference where she released her biennial revenue estimate that will be used to set Texas budget for the upcoming legislative session, Monday, Jan. 7, 2013, in Austin, Texas. (AP Photo/Eric Gay)
Photograph by Eric Gay—AP

There are just a few open spots left on President-elect Donald Trump’s cabinet and one of the big remaining questions is whom he will pick for Agriculture secretary.

One contender is Susan Combs, former Texas comptroller and agriculture commissioner, whose nutrition policies would “please Michelle Obama,” according to Politico. Trump aides said Combs met with Vice President-elect Mike Pence in Washington, D.C., on Tuesday, and she has the backing of House Agriculture chairman Mike Conaway, a fellow Texan, who told Politico that Combs is “a proven commodity in Texas” and “a stunningly capable woman.”

Combs herself has expressed doubts about Trump. She initially backed former Hewlett-Packard CEO Carly Fiorina in the Republican primary before switching her support to Florida Senator Marco Rubio when Fiorina dropped out. In September, when she appeared at the Texas Tribune Festival, Combs expressed some reservations about Trump, noting that he has “an unfortunate habit…of not being particularly polite in public about women.”

Some Republicans likely have their own reservations about Combs, as they have questioned her conservatism. One Texas political operative told Politico that Combs’ “liberal policies” in Texas were more “restrictive” than Michelle Obama’s. Combs was elected Texas agriculture commissioner—the first woman to hold the role—in 1998. In the job, she pushed measures to remove fried foods, soda, and sugary treats from Texas public schools just as the current first lady has done at the federal level. (Sid Miller, Combs’ successor in the role, reversed those policies.)

Combs’ role as Texas comptroller, a position she assumed in 2006, has also come under scrutiny since under her leadership the office inadvertently released the personal information of 3.5 million Texans, such as their social security and driver’s license numbers. It was believed to be the largest data breach in Texas history.

More recently, Combs wrote a memoir titled Texas Tenacity that went on sale this month. In the book, Combs describes her experience running for elected office and her upbringing on a cattle ranch. She also writes frankly about her struggles as a 6-foot-2 woman. Her height ended up being her biggest strength. “It was very hard to be that tall,” Combs said. “Either I was going to let it own me or I was going to own it. I decided I had to own it. I ran against guys who were all shorter than me. We were standing on this stage [at] these debates and I said, ‘You know, all of my opponents look up to me,’” she told the Texas Tribune last month. She’s also using leftover campaign contributions to launch HERdacity, a nonprofit online platform and mobile app that aims to give women with shared interests and career objectives a way to connect and support one another. It goes live in February.

Combs and Trump’s transition team did not immediately respond to requests for comments.

If Combs does get the nod for Agriculture secretary, she would add to the gender diversity of Trump’s cabinet, which so far features just four women.