How a Trump Presidency Could Impact Michelle Obama’s Food Legacy 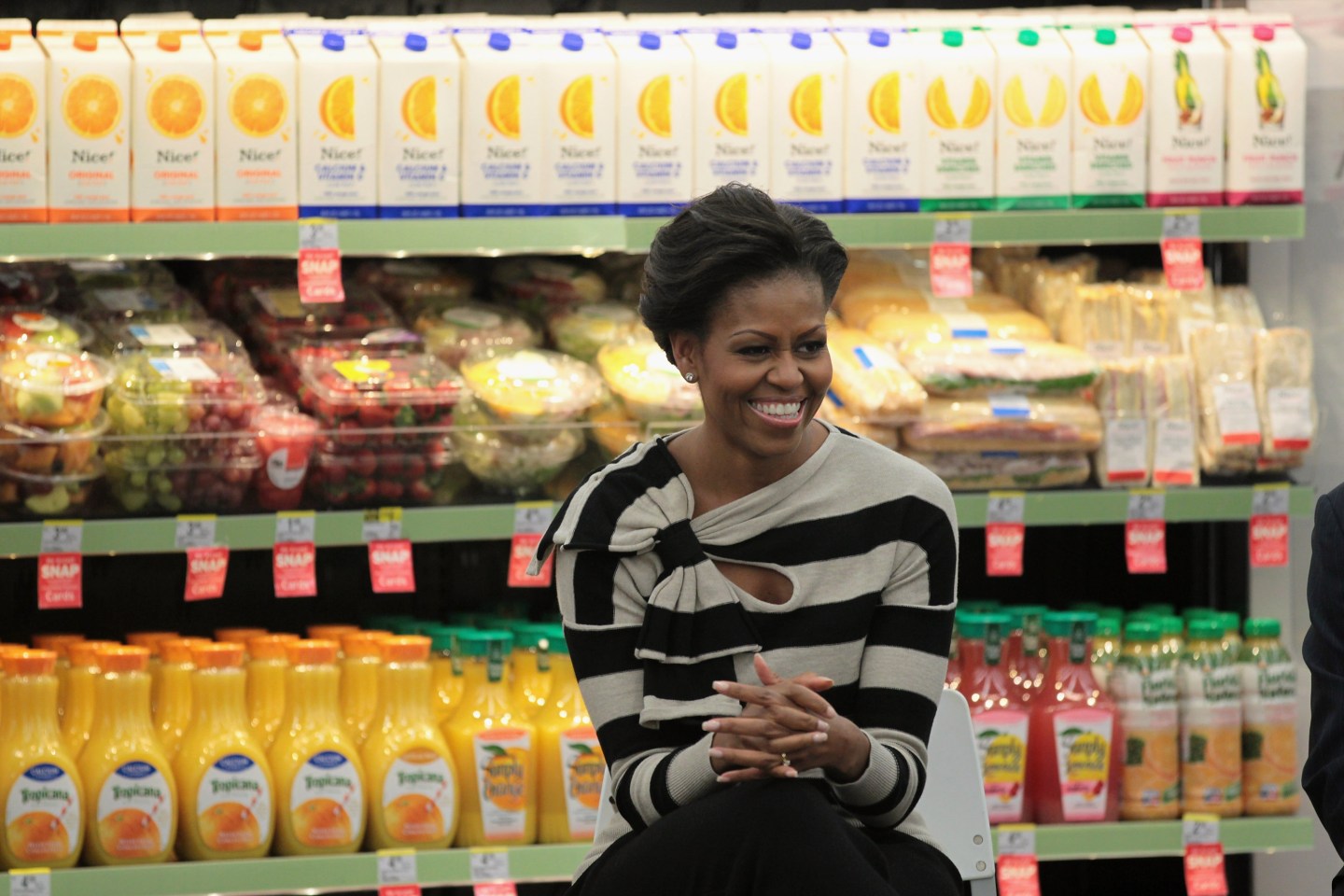 Michelle Obama will be ceding the title of first lady to Melania Trump next month, but she may hold for some time the other distinction she earned during her time in the White House: America’s best known advocate for healthy food.

The non-profit organization she helped create as first lady, Partnership for a Healthier America (PHA), where she is honorary chair, will continue its work convincing food companies to improve nutrition content and labeling of products, the group said.

“Michelle Obama has been a tremendous leader in this space,” said Larry Soler, president and chief executive of the group. “That legacy is going to continue for a long time after this.”

When President-elect Donald Trump and a Republican-controlled Congress take over on Jan. 20, lawmakers are expected to take aim at what one of them has called “burdensome new rules” on food. School lunches and menu labeling standards are likely to be among the changes that may come under fire.

Trump, a self-professed fan of junk food, has not been explicit on what he plans to do with food policy, although he campaigned for the Nov. 8 election on a broad promise to undo regulations on business. Nutrition advocates believe that, regardless of regulatory changes, private sector partnerships forged under Michelle.

For Now, Melania Trump Plans to be Long-Distance First Lady

Obama’s time at PHA are likely to endure. The first lady helped launch PHA in 2010, in conjunction with her broader ‘Let’s Move!’ effort to tackle childhood obesity in the United States.

Since then, the organization has inked voluntary deals with scores of food companies, universities, hospitals and hotel chains aimed at improving nutritional content in food offerings. Companies that have made such agreements, like the world’s No.1 retailer Wal-Mart Stores Inc and convenience store chain Kwik Trip, say they expect to uphold the commitments they have made regardless of any policy changes in Washington.

“Our commitment to provide healthy food – specifically for young people – will not only continue but it will grow,” said a spokesman for Wisconsin-based Kwik Trip, which agreed with PHA this year to offer more fruit, vegetables and whole-grain foods at its stores at low cost.

PHA said its work will continue unabated after the Obamas leave the White House, and expects that consumer demand will continue to drive companies to participate. The first lady expects to continue her work on the issue, though it is unclear exactly what her role will be.

“I will always be here as a partner in this effort – always,” she said earlier this year.

For more on Michelle Obama, watch:

Michelle Obama took her healthy eating agenda from the White House – where she built an organic vegetable garden – to the halls of Congress, where she lobbied lawmakers in the passage in 2010 of the Healthy, Hunger-Free Kids Act.

Republicans balked at renewing elements of the Healthy, Hunger-Free Kids Act in 2015 and the House of Representatives introduced legislation that critics say would dial back access to the program.

Republican Representative Todd Rokita from Indiana this year introduced legislation to overhaul the school lunch program, in part to make sure that “the First Lady Michelle Obama-inspired nutrition standards are revised so that school food is more edible.” He has also said he plans to work toward reforms of “burdensome new rules” with the new president.

Also under threat may be another measure to usher in more detailed labeling requirements for menus at restaurants and grocery stores, which passed as part of the 2010 health overhaul known as the Affordable Care Act or Obamacare. Trump has said he will repeal Obamacare.

Trumpcare: How It Could Differ From Obamacare

“We have a sense of (Trump’s) personal eating habits, but not his view of food policy. But given his anti-regulatory, anti-science rhetoric, we’re on high alert,” said Margo Wootan, director of nutrition policy at Center for Science in the Public Interest in Washington.

A spokesman for Trump’s transition team did not respond to requests for comment. Melania Trump, who last month pinpointed cyber-bullying as her cause as first lady, has not mentioned interest in the healthy eating issue.

Trump’s early choices in building his administration have also triggered some concerns among healthy food advocates. He has nominated Representative Tom Price of Georgia to head the Department of Health and Human Services, which oversees the National Institutes of Health and works to develop dietary guidelines with the U.S. Department of Agriculture.

Here’s What Donald Trump Is Doing This Thanksgiving

Price is an opponent of Obamacare and voted for a bill that would have banned state labeling of genetically-modified ingredients. Trump has yet to select an agriculture secretary.

Regardless of legislative repeals, supporters of Michelle Obama’s efforts to get healthier food into mainstream America believe the impact of her work cannot be undone.

“There was very little positive industry action before she got there. Health and obesity issues weren’t on their agendas,” said Sam Kass, a chef and former executive director of ‘Let’s Move!’ who also served as President Barack Obama’s nutrition policy advisor. “Now it is the top priority for every CEO.”