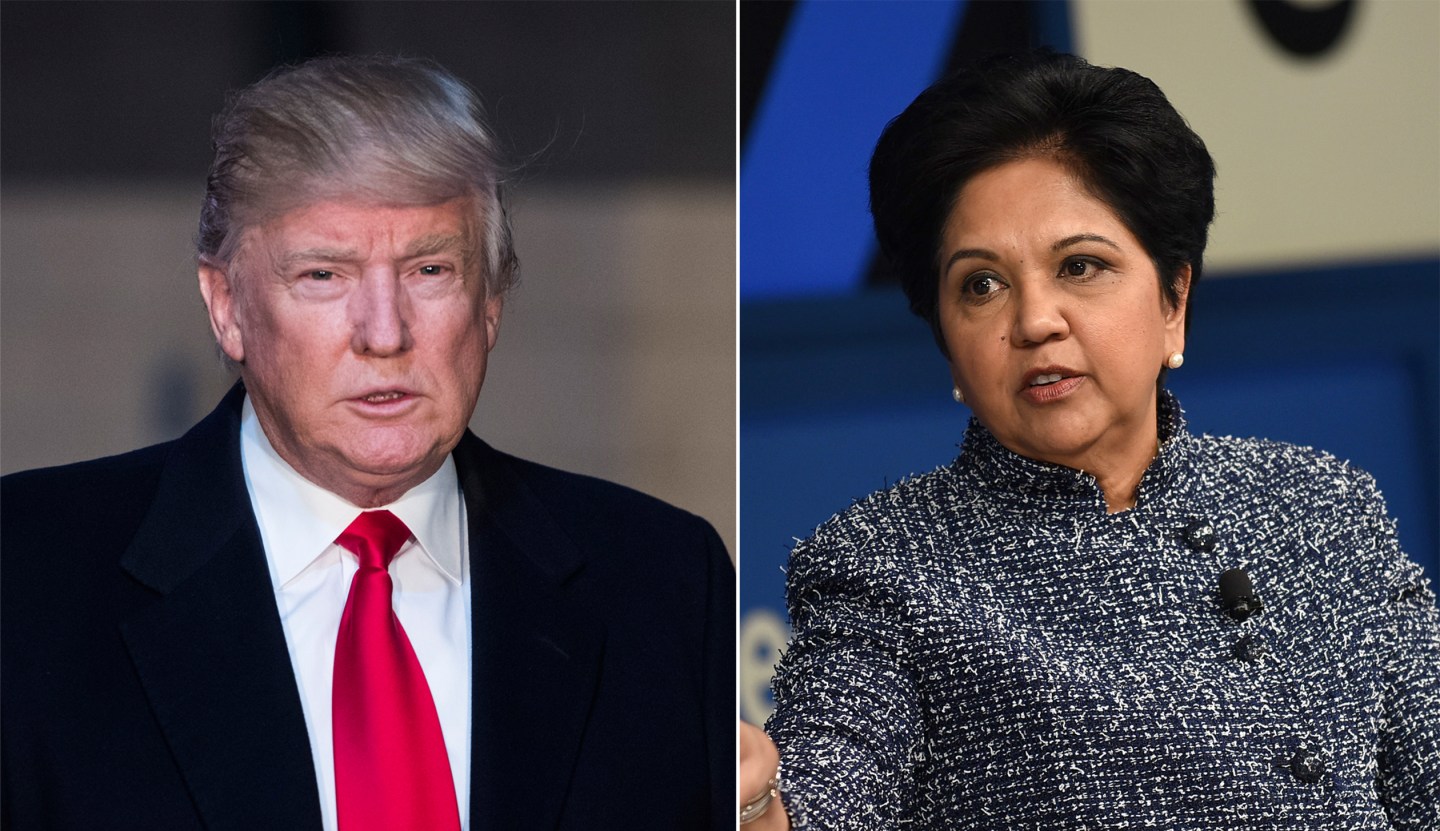 President-elect Donald Trump walks out to talk to members of the media after meeting with victims and families of the recent shooting at the Value City Arena at the Jerome Schottenstein Center at The Ohio State Universtiy in Columbus, Ohio on Thursday, Dec. 08, 2016. Chairman and CEO of PepsiCo Indra Nooyi speaks at The New York Times DealBook Conference at Jazz at Lincoln Center on November 10, 2016 in New York City.
Photos by Jabin Botsford/The Washington Post & Bryan Bedder/The New York Times —Getty Images

PepsiCo CEO Indra Nooyi has become only the third female executive to join a 19-person business forum created by President-elect Donald Trump as he prepares his economic agenda for the United States.

Trump’s team on Wednesday announced that three additional members would join the new president’s Strategic and Policy Forum—a group of business leaders who can be called upon to meet with Trump frequently as he implements his economic strategy. The initial round of 16 members included just two women: General Motors chairman and CEO Mary Barra and IBM chairman, president and CEO Ginni Rometty.

All three rank high on Fortune’s most recent Most Powerful Women list. Barra repeated as the most powerful woman in 2016, while Nooyi is second and Rometty ranked fourth.

The inclusion of Nooyi on the expanded business policy council (Uber Technologies CEO Travis Kalanick and Tesla Motors CEO Elon Musk were also added) is interesting as Nooyi generated headlines last month for comments she made in the wake of Trump’s victory. After Nooyi appeared at a post-election New York Times conference, online boycotts began to float around alleging she said she “loathed” Trump and “hated” his supporters. As those boycotts began to circulate on social media channels, a #BoycottPepsi hashtag circulated.

But as Fortune reported, Nooyi never made those comments. In fact, she congratulated Trump on the election, adding “We should mourn for those of us who supported the other side. But we have to come together and life has to go on.” Her public stance has been neutral: Nooyi never backed a presidential candidate and never personally gave money to either campaign. She did vote, but hasn’t disclosed how she voted.

Adding Nooyi to Trump’s team of business experts gives a seat at the table to a key voice that can advocate and advise on behalf of the food and beverage industry, which didn’t have any representatives on the council until Nooyi was added to the group. Her insights in the world of food will likely be helpful in relation to the Food and Drug Administration, as well as policies involving trade (many Big Food companies sell billions of goods abroad), taxation, and nutritional guidelines.