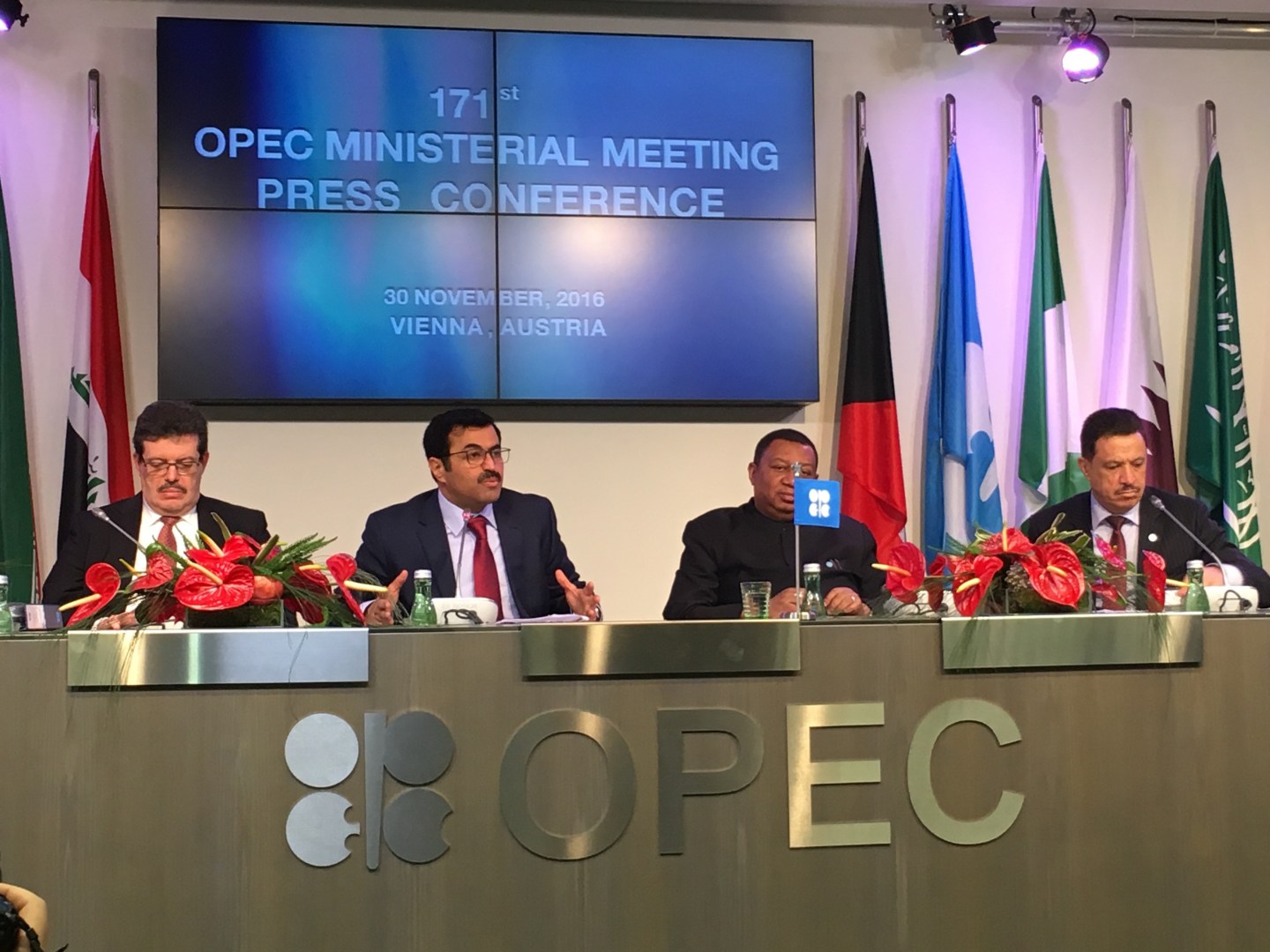 Oil prices surged to their highest since mid-2015 and U.S. Treasury yields hit a more than two-year peak on Monday after the world’s top crude producers agreed to the first joint output cut since 2001.

Coming at the start of a week when the United States is expected to raise interest rates for the only the second time since the global financial crisis, the weekend agreement between the Organisation of Petroleum Exporting Countries and key non-OPEC states set the markets alive.

Brent oil futures soared 5% to top $57 a barrel for the first time since July 2015 and U.S. crude leapt above $54 a barrel to send global inflation gauges spiking as well.

There was particular surprise as Saudi Arabia, the world’s number one producer, said it may cut its output even more than it had first suggested at an OPEC meeting just over a week ago.

“The original OPEC deal pointed to a fairly lumpy 3% cut (in production), so this suggests there is a bit more upside for oil prices,” said Neil Williams, chief economist at fund manager Hermes.

On the rise in bond yields, which tend to set global borrowing costs, he added: “The Fed hike is mostly baked in so when we do get it, it will be more about the statement.”

European oil companies jumped more than 2% on the oil surge and helped the pan-regional STOXX50 index add 0.1%, having just had its best week in exactly five years.

Bond markets in contrast were under heavy pressure. Euro zone government bond yields were sharply higher with German Bunds up 5 basis points at 0.40% as U.S. yields topped 2.5% for the first time since October 2014.

“We have seen OPEC and non-OPEC producers agreeing, which is boosting reflation expectations around the world,” said Chris Weston, an institutional dealer with IG Markets.

In another sign of the reflation trade, breakeven rates—the gap between yields of five-year U.S. debt and a matching tenor in inflation-protected securities—were at two-month highs.

Wall Street futures, meanwhile, pointed to the main U.S. indexes barely budging when they resume, having enjoyed an uninterrupted gain of nearly 4% over the past six sessions.

Focus was also on the currency markets as the dollar rose to its highest since February against the Japanese yen, before what is almost certain to be the first rate hike of the year from the U.S. Federal Reserve on Wednesday.

Japan’s yen also tends to suffer when oil prices rise, since the country is a major importer.

The Norwegian crown, Canadian dollar and Russia rouble were the big gainers from the oil deal. The rouble rose almost 2% against both the dollar and euro as Russia shares, which have rocketed almost 90% since January, hit the latest in a string of record highs.

China’s insurance regulator, which recently warned it would curb “barbaric” acquisitions by insurers, said late on Friday it had suspended the insurance arm of China’s Evergrande Group from conducting stock market investment.

“I fully understand the ‘one China’ policy, but I don’t know why we have to be bound by a ‘one China’ policy unless we make a deal with China having to do with other things, including trade,” Trump said in an interview with Fox News.

Emerging markets are already bracing for a difficult run if U.S. rate hikes push up the dollar and global bond yields.

Turkey’s lira has borne the brunt of much of the pressure in recent weeks, and it took another 1 percent hit alongside a sharp fall in Turkish bonds after data showed the country’s economy suffering its first contraction since 2009.

Gold, meanwhile, which had a bumper first half of 2016, hit its lowest level since early February at $1,152 an ounce.