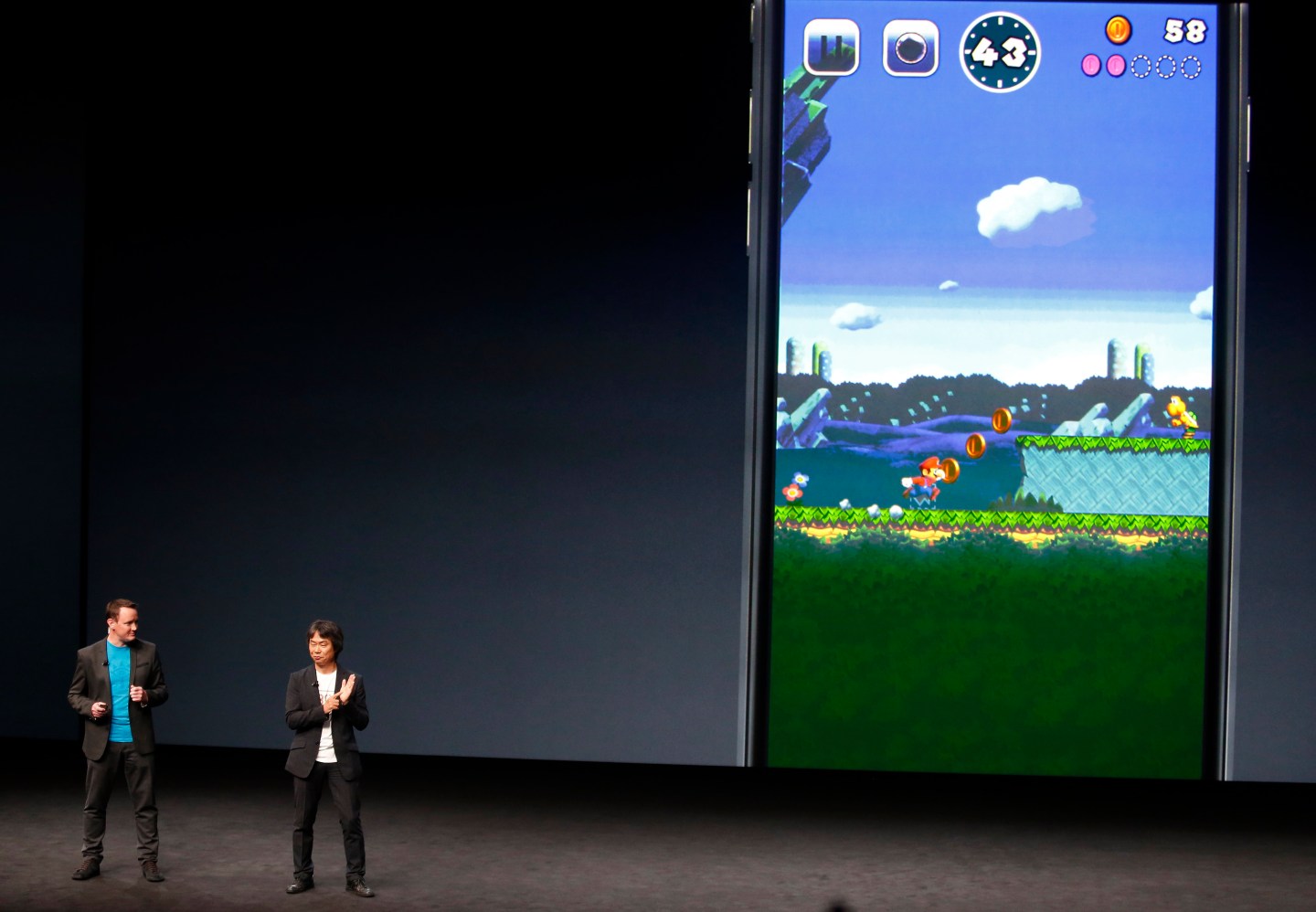 In the decades since Mario’s inception, Nintendo’s stout, adventurous plumber has made his way to consoles of varying shapes and sizes, from the classic NES to the company’s 3DS handheld. But while Mario has grown, journeyed to new worlds and ultimately changed, the way players interact with his side-scrolling incarnations hasn’t.

Whether maneuvering Mario in the original Super Mario Bros. or last year’s Super Mario Maker for Wii U, gamers have held a controller in both hands, hammering buttons to interact with quirky two-dimensional worlds while dashing and leaping from left to right. Tap a button or tilt the joystick and Mario would start jogging, while pressing other buttons might prompt him to dash or hurl fireballs at approaching enemies.

No longer. With Super Mario Run, the company’s first mobile Mario game, the buttons are gone. Start the game and Mario begins to move automatically, zipping through otherworldly obstacle courses without input from the player. Gamers tap the screen to make him jump, or press and hold to make him leap higher. That’s because Mario’s newest platform-hopping adventure, which launches on December 15 for $9.99, was developed for iPhones and iPads (an Android version should emerge down the road). That move — in part a gambit designed to use its world-recognized IP to drive players back to core platforms like its upcoming Nintendo Switch console — forced the company to rethink the series’ iconic gameplay entirely.

In mobile gaming, a popular sub-genre sometimes called an “endless runner” sets the main character dashing automatically across the screen as players tap to perform jumps or other maneuvers. If you’ve played stuff like Temple Run, Despicable Me: Minion Rush or Subway Surfers, you know the drill. But after laying hands on the game at a press event, I can confirm that it’s not a Mario-themed clone of those titles. In classic Nintendo fashion, the company has managed to make Super Mario Run feel as versatile and satisfying as the Mario games it’s released for its own platforms over the years. Understanding how to play is simple and the gameplay remains rich and addictive, in other words, but true mastery is going to take plenty of practice.

Rather than focusing on where Mario moves or in which direction he runs, it’s how players orchestrate his leaps that gets him to the flagpole at the end of each stage, unlocking new challenges. Simply letting him beeline from one point to another doesn’t accomplish much. It’s the timing and longevity of taps and longer presses that boost Mario to his goal.

Mario automatically vaults over enemies as they approach, for instance, but tapping the screen at the top of these hops gives him extra height and allows him to collect coins. In many cases, players have to use these jumps in creative ways to advance through a level or snatch a special coin. During my demo, I found myself ricocheting off walls, bouncing atop the backs of Koupas, or grasping a ledge to avoid falling. Timing is everything in Super Mario Run — a carryover from prior Mario games that’s employed in novel ways here.

Players can choose from three different modes in Super Mario Run: World Tour, Toad Rally and Kingdom Builder. World Tour is essentially the game’s story mode, wherein players progress through levels and unlock different worlds. Toad Rally, by contrast, is a competitive mode in which players compete to collect more coins and impress as many mushroom-capped “Toads” as possible. To access this mode, gamers must collect Rally Tickets, which can be obtained by completing levels in the World Tour mode and collecting coins.

The bigger a player’s Toad following, the more he or she will be able to build up their kingdom. Players have to collect coins by playing through levels and coerce Toads to come live in their kingdom by impressing them in Toad Rally mode in order to acquire new buildings and structures in Kingdom Builder mode. Some of these additions are purely ornamental, but others unlock related features. A tiny house with a white roof and a red star includes a bonus game, for instance, while adding Luigi’s home to a player’s kingdom will introduce him as a playable character. (Toad and Yoshi can be unlocked in the same way.) But beware: Toads can leave a player’s side as quickly as they’ve chosen to join it. Losing a run to another player in Toad Rally mode can result in Toads leaving your team.

A big part of what’s made previous Mario games so addictive is the way they fold hidden challenges into levels, say the stars and stamps sprinkled throughout Super Mario 3D World. In the same way, Nintendo’s embedded goodies in Super Mario Run‘s World Tour mode that make levels worth replaying, such as collecting pink coins scattered through a game level. In most cases, reaching these coins requires a skillful tap that involves strategically timing a hop or springing off an enemy.

In some situations, Nintendo’s made it easier to grab these coins or avoid an adversary by planting a red block in Mario’s path, which stops him in his tracks to give the player time to adequately plan their jump. Once a player gathers all of the pink coins in a level, they then progress to the next challenge, where they must collect purple coins before progressing to a black coin phase. These coin-based mini-missions, combined with all the incentives to build an expansive Kingdom, suggest Super Mario Run should have plenty of replay value.

The new touch controls aside, the game’s levels should feel structurally familiar to anyone who’s played the arcade or console games. Familiar foes like Boos, Koopas and Goombas will thwart Mario’s progress. Some puzzles include choosing the right door to proceed to the next section of a level, just like in previous games, which helps Super Mario Run feel more like a traditional Mario game and not just another “runner.” Some characters have also been tailored to better suit the game’s mobile-centric controls. Bullet Bill, for example, no longer charges at Mario, but instead follows him as he sprints across a stage.

Mario’s debut on the iPhone (AAPL) is filled with enough puzzles, challenges, and rewards to keep fans hooked. The one-time $9.99 price is a bit more than some iPhone owners are used to paying for a casual game, but Super Mario Run is also more polished and rich than most mobile titles I’ve encountered (it’s also a deliberate decision by Nintendo to deliver the full experience at that price). Nintendo (NTDOY) wonks have waited years for Mario to move to mobile, and fans will be relieved to know that his appeal translates well to smartphones. By bringing some of its biggest franchises to the mobile universe, Nintendo is keeping its franchises relevant, enlarging its celebrated brands, and setting the table for its own mobile maneuvers when Nintendo Switch arrives next spring.