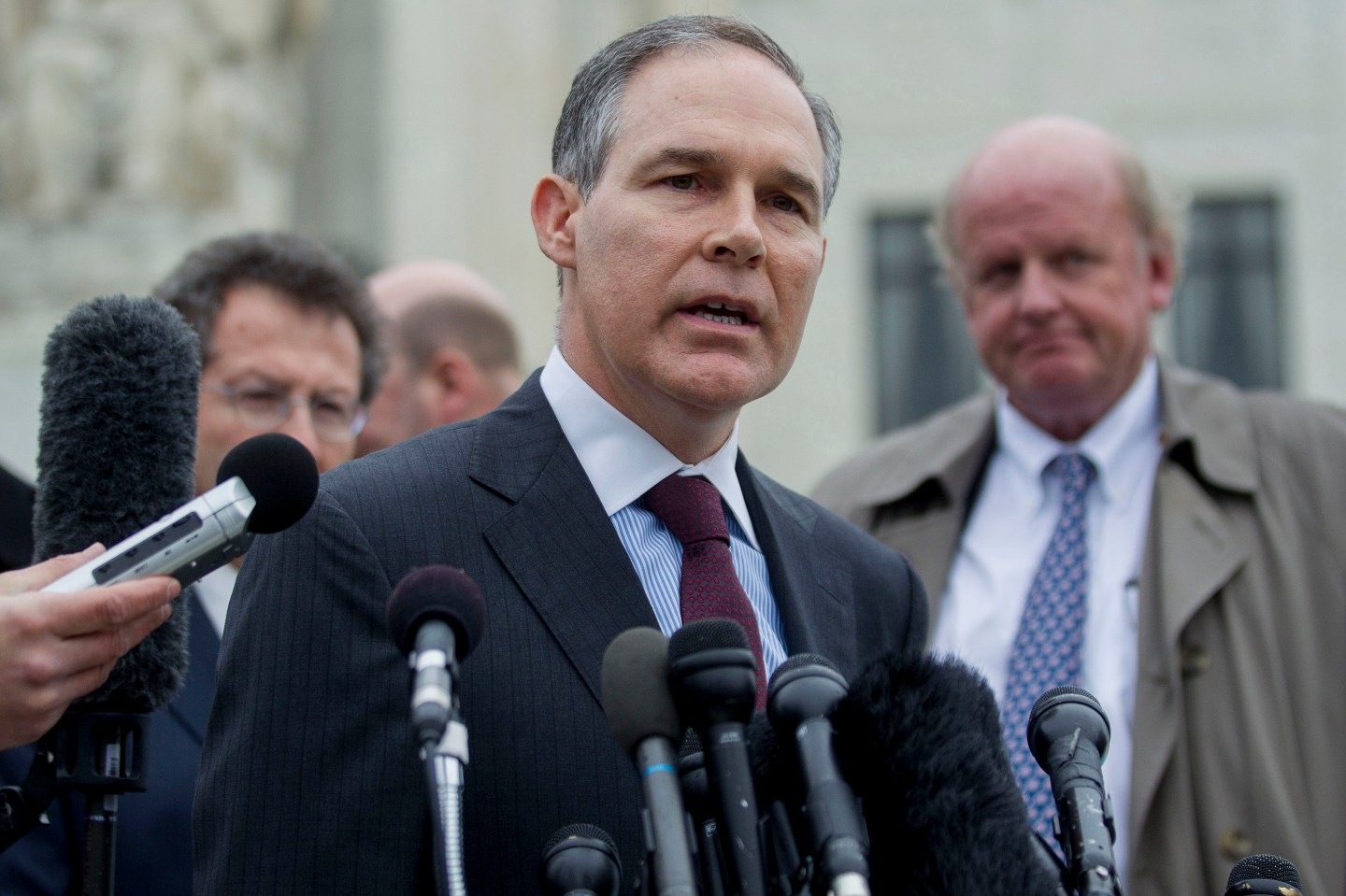 Scott Pruitt, attorney general of Oklahoma. speaks to the media in front of the U.S. Supreme Court in Washington, D.C., U.S., on Wednesday, March 4, 2015.
Bloomberg via Getty Images

(WASHINGTON) — Donald Trump will pick an ardent opponent of President Barack Obama’s measures to curb climate change as head of the Environmental Protection Agency, a Trump transition team source said on Wednesday, a choice that enraged green activists and cheered the oil industry.

Trump’s choice, Oklahoma Attorney General Scott Pruitt, fits neatly with the Republican president-elect’s promise to cut back the EPA and free up drilling and coal mining, and signals the likely rollback of much of Obama’s environmental agenda.

Since becoming the top prosecutor for the major oil and gas producing state in 2011, Pruitt has launched multiple lawsuits against regulations put forward by the agency he is now poised to lead, suing to block federal measures to reduce smog and curb toxic emissions from power plants.

He is also a leading figure in a legal effort by several states to throw out the EPA‘s Clean Power Plan, the centerpiece of Obama’s climate change strategy that requires states to curb carbon output.

In an interview with Reuters in September, Pruitt said he sees the Clean Power Plan as a form of federal “coercion and commandeering” of energy policy and that his state should have “sovereignty to make decisions for its own markets.”

Pruitt, 48, has also said he is skeptical of climate change. In an opinion piece in an Oklahoma newspaper this year, he wrote that he believes the debate over global warming is “far from settled” and that scientists continue to disagree on the issue. An overwhelming majority of scientists around the world say manmade emissions are warming the planet.

The Obama administration finalized the Clean Power Plan in 2015 as a key part of meeting U.S. obligations under the Paris Climate Agreement, an accord among nearly 200 countries to curb global warming. Many scientists say warming is causing rising sea levels, drought, and an increase in ferocious storms.

Trump vowed during his campaign to pull the United States out of the Paris deal, saying it would put American businesses at a competitive disadvantage. Since the election, however, Trump has said he will keep an “open mind” about the climate deal, and also met with leading climate change activist and former Vice President Al Gore.

Trump, a real estate magnate who takes office on Jan. 20, is in the midst of building his administration and is holding scores of interviews at his office in New York.

Environmental groups and former Obama officials bristled at the choice of Pruitt.

“Scott Pruitt running the EPA is like the fox guarding the henhouse,” said Gene Karpinski, president of the League of Conservation Voters, which supported Trump’s opponent in the election, Democrat Hillary Clinton.

“Time and again, he has fought to pad the profits of Big Polluters at the expense of public health.”

Heather Zichal, a former Deputy Assistant to the President for Energy and Climate Change under Obama, said Trump’s choice was alarming.

“You can meet with Al Gore on Monday, pledge to keep Teddy Roosevelt’s environmental legacy alive on Tuesday, but if you nominate the Clean Power Act’s leading opponent to head the EPAon Wednesday, you’re making an unequivocal statement about the direction of your leadership,” she said.

But representatives of the oil industry, and some Republican lawmakers, were cheered by the pick.

Scott Segal, an energy industry lobbyist at Bracewell LLP called Pruitt “a measured and articulate student of environmental law and policy” who helped “keep EPA faithful to its statutory authority and respectful of the role of the states in our system of cooperative federalism.”

U.S. Senator Jim Inhofe of Oklahoma, also a climate change skeptic, said “Pruitt has fought back against unconstitutional and overzealous environmental regulations like Waters of the U.S. and the Clean Power Plan; he has proven that being a good steward of the environment does not mean burdening tax payers and businesses with red tape.”

“Attorney General Pruitt has a strong conservative record as a state prosecutor and has demonstrated a familiarity with laws and regulations impacting a large energy resource state,” one of the aides said on a transition team briefing call on Wednesday.