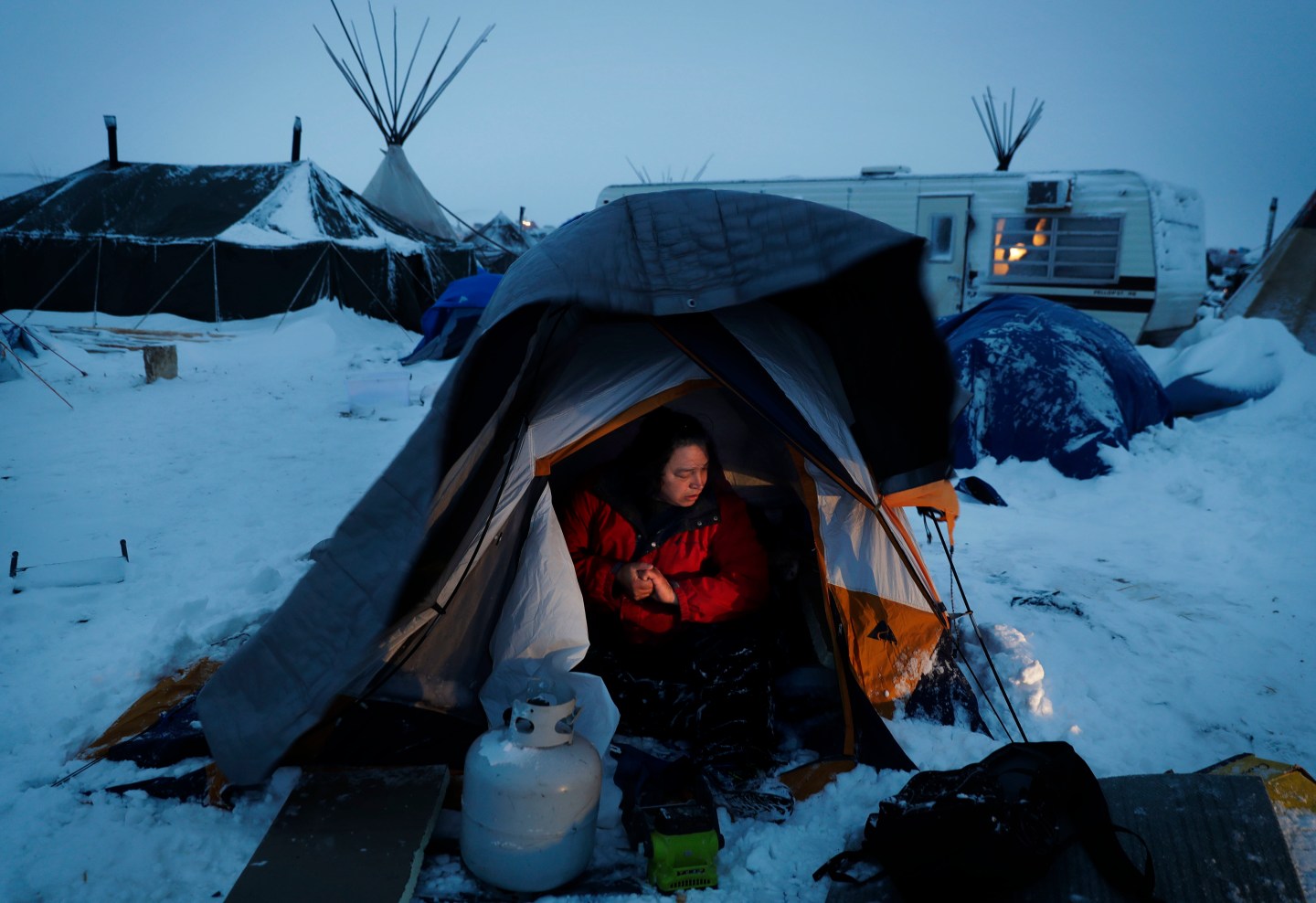 Karl McCartney, an Arrow Lakes Okanogan Native American from Omak, Wash., cleans snow out from his tent after a storm blew through the Oceti Sakowin camp where people have gathered to protest the Dakota Access oil pipeline in Cannon Ball, N.D., Monday, Dec. 5, 2016. Industry leaders are urging President-elect Donald Trump to make approval of the disputed Dakota Access oil pipeline a "top priority" when he takes office next month, while opponents who have protested the project for months are vowing to stay put on their sprawling North Dakota encampment despite harsh winter weather and a tribal leaders' call to leave. (AP Photo/David Goldman)
Photograph by David Goldman — AP

The company building the Dakota Access Pipeline turned to a federal judge late on Monday for a permit to finish the job after the federal government ruled against the controversial pipeline.

The pipeline, which is being built by Energy Transfer Partners (ETP), has been the subject of protests from the Standing Rock Sioux tribe and climate activists for months, due to its proximity to the tribe’s reservation.

On Sunday, the federal government turned down ETP’s request for an easement that will allow it to tunnel under the Missouri River, adjacent to the Standing Rock reservation. The tribe and others hailed the victory, even though they expected the fight with the company would continue.

In a legal filing on Monday, ETP asked a judge to grant the permit, saying that the U.S. Army Corps of Engineers, in its decision, responded to “political pressure and an escalating campaign of violence and disorder waged by protesters” against the project.

Last month, ETP said that delays have already cost it $450 million, while it anticipates further monthly delays of about $83 million. The company did comment on the filing.

“This seems like a distraction to me from the real issues. The Army Corps knows whether or not it has granted an easement across federal property. The Army Corps has wide discretion in this issue,” said Jan Hasselman, a lawyer with Earthjustice, which is representing the Standing Rock Sioux.

Protests have gathered momentum this year in both the United States and Canada, as climate activists have united with Native tribes to form a powerful coalition against pipeline development. Canada’s natural resources minister was forced to apologize on Tuesday for remarks interpreted as favoring law enforcement violence against protesters.

This came after several clashes between police and activists in North Dakota, most recently a confrontation with several hundred protesters where police responded by spraying people with water and tear gas amid freezing temperatures.

That galvanized hundreds of veterans to flock to the Dakota Access protests, where they met tribal leaders to protest over the weekend, just before the Army Corps’ decision.

The chief of the Standing Rock Sioux tribe, Dave Archambault, asked protesters on Monday to go home, saying they should go home to spend winter with their families.

That became impossible late on Monday, as conditions turned harsh at the Oceti Sakowin camp in North Dakota, when a blizzard rolled in and raged throughout Tuesday, forcing activists to hunker down in communal tents and cars.

A state travel warning was issued on Monday, imploring people in southern North Dakota, including the area around Cannon Ball and the capital of Bismarck, to avoid travel. Snow has accumulated rapidly, with wind gusts in the area exceeding 50 miles per hour (80 kmh), according to the National Weather Service, causing drifts and blocking roads.

Linda Black Elk, 42, a leader of the Standing Rock Medic and Healer Council, said Tuesday there had been two cases of hypothermia in camp. She said volunteers walked around the camp through the evening visiting tipis and yurts to check on people.

Morton County, in a release, said it had set up shelters at several locations, where a number of protesters attempting to leave the camp had ended up due to difficult driving conditions. Blockades on Highway 1806, just north of camp, were still in place as of late Monday, as the blizzard approached.